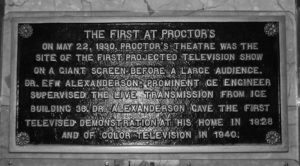 Just inside the entry to Proctor’s Arcade in Schenectady is this plaque, prominently and proudly proclaiming that an important first in technology took place right there in the historic Proctor’s Theatre:

“On May 22, 1930, Proctor’s Theatre was the site of the first projected television show on a giant screen before a large audience. Dr. EFW Alexanderson, prominent GE engineer, supervised the live transmission from IGE Building 36. Dr. Alexanderson gave the first televised demonstration at his home in 1928 and of color television in 1940.”

We recently posted this plaque on our Instagram account Signs and Markers (you can probably guess what we post there), and got an interesting comment: “Wonder what the show was?” Know what? It had never occurred to us to ask.

GE’s role in the development of television is somewhat cloudy, thanks to the rob-and-plunder approach that GE and its subsidiary RCA took to the development of both radio and television – they made tremendous claims in the face of evidence, patents, and even lost lawsuits. That Ernst F.W. Alexanderson demonstrated “television” in his own home in Schenectady in 1927 appears to be indisputable, but the scanning disc technology that he was using has absolutely nothing to do with how television broadcasting as we know it was developed. (Look up Philo Farnsworth if you want to learn about electronic television, and if you want the whole story try “The Last Lone Inventor.”)

Nevertheless, Alexanderson was developing a form of transmitted moving pictures in the last years of the decade, with televised newscasts being broadcast from Schenectady’s WGY beginning in May of 1928, and the first televised drama in September. The number of people who could receive those signals were few, and the screens very tiny (though still generous compared to an iPhone) and fairly indistinct. The idea of projecting the image was probably natural, and it does appear that the 1930 projection at Proctor’s was the first of its kind. 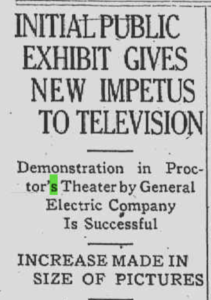 On May 23, the Schenectady Gazette reported on the first successful public demonstration of radio television given the morning before at the laboratories of the General Electric Company and at RKO Proctor’s Theater. It quoted Alexanderson, who was about to leave for Panama and go aboard aircraft carrier Saratoga in consultation with the Navy to adapt television for war purposes. “Just think of it, when you can put an electric eye wherever you wish and you can see through this eye just as if you were there. An airplane with a news reporter will fly to see whatever is of interest and the whole theater audience will be with him seeing what he sees, and yet the audience will be perfectly safe and comfortable. Or what will this mean in the wars of the future when a staff officer can see the enemy through the television eyes of his scouting planes or when they can send a bombing plane without a man on board which can see the target and be steered by radio up to the moment when it hits?” Can’t say Alexanderson wasn’t visionary.

“The first appearance of television in the theater was presented to show the possibilities of the new art as a medium of entertainment. Through a loud speaker system the voices of the performers, also transmitted by radio, were heard by the audience. The images of the actors and actresses were reproduced on a screen six feet square and were readily visible by those seated in the back rows of the balcony. The characters taking part in the acts appeared larger than flesh and blood persons and with adequate clearness.

“The performers appeared before the television camera in an improvised studio in the laboratory of Dr. Alexanderson. Light impulses, converted into electrical impoulses or radio signals were sent out by a transmitter in the laboratory on a wave length of 140 meters. A microphone close to the artists picked up his [sic] speech and song, and converted the sound into electrical impulses which were carried by wire to a short wave transmitter at South Schenectady, from which point they went on the air on a wavelength of 92 meters.

“At the theater R.D. Kell, assistant to Dr. Alexanderson in television research, in the role of control operator, received the picture or light impulses, reproduced them on a small monitor telopticon and then transferred these impulses to the light valve, at which point the light was broken up to produce an image corresponding in every detail to the actor or actress at the studio.

“Although only the head and shoulders of the performer appeared on the screen the fact that they were more than lifesize compensated for the lack of a full length view.

“A second receiver picked up the sound signal and fed it into loud speakers which converted the electromagnetic waves into sound. The really important advance made in television as demonstrated yesterday was the size of the image. Dr. Alexanderson’s first demonstration, three years ago, was a picture in a three-inch aperture. Last fall at the radio show at the Madison Square Garden, New York, an image 14 inches square was exhibited. The image shown yesterday was not simply black and white, on the order of a silhouette. All the gray shades between black [and] white were reproduced, registering every shadow and shade of the features and giving both depth and detail to the image.”

While we’re hugely appreciative of the technical detail the Gazette provided (and there was quite a bit more, including details on the spinning disc the size of a bicycle wheel, the light-sensitive tubes, and the light valve and lens system), it took a while to get to the central question: what was on TV?

“The program yesterday morning began with a conversation between Mr. Trainer in the studio at building 37 and Mr. Gluessing. Mr. Gluessing spoke through a microphone which was placed on the left-hand side of the stage and which was connected by direct wife to the studio. Mr. Trainer’s voice was first heard as he answered Mr. Gluessing on the short-wave station attached to the microphone. Then before the amazed eyes of the audience appeared the picture of Mr. Trainer upon the screen. At the request of Mr. Gluessing he bowed, smiled and talked. He lighted a cigarette and blew the smoke toward the audience. He spoke slowly and distinctly, putting his talk over with a manner that rated him on a par with the best of announcers despite the fact that he had no previous public announcing experience…

“The first performer to appear before an audience in a theater through the means of television was Matilda Bigelow Russ of the WGY staff. She was followed by actors and actresses appearing on the current bill at RKO Proctor’s.

“They were: William and Weber, Mabel Reflow, Harrison and Dakin, Slim Timblin and Billy Raymond and Helen Keefe. William Gluessing was at the microphone in the theater.

“The feature of the program, however, took place when John Gamble, musical director of the theater, led his orchestra which was in its customary position in the pit, but with Mr. Gamble, miles away, directing.”

We haven’t learned much more about the performers, other than that Matilda Bigelow Russ was a soprano who also performed at the State Theater. An Associated Press story filled in the performance a bit:

“Some of the stunts included music by the orchestra in the theatre, led by the conductor standing in front of a television camera a mile away, who wielded his baton for the guidance of his players and listened by telephone to their renditions; comedy sketch acts, with one member of the team on the stage and the other in the television laboratory at the General Electric Company’s local plant, and vocal and instrumental selections, with the image of the artists on the screen and the tones filling the theatre through the medium of a public address system.”

The Gazette reported that “owing to the fact that some of the executives of the R-K-O circuit have expressed a desire to see the demonstration,” it would be held over for two additional days, given as part of the regular afternoon and evening performances. They quoted Billy Raymond of the team of Slim Triblin and Company as saying, “I’ve been working with Slim for five years. We know each other pretty well, but to hear his speech off the screen in answer to my questions and his laughing at me was the doggonedest experience I have ever had. When he first started talking I felt so queer I could hardly answer him.”

What was the quality? “The images were produced with wonderful fidelity, with all the shadows and shades of the features of the performers showing on the screen with nearly the detail of a motion picture performance. In fact, the demonstration resembled the movies of an earlier day. There was some slight swaying in the picture from side to side and there was a slight flickering, unlike the flickering of the movies of past years, which was vertical. With perpendicular lines of light and shade upon the screen, the television flicker appeared to be horizontal, with the lines of light and shadow slightly curved.”