Leland Stanford may be one of the most famous, or most important, people ever to come from Albany (born in the town of Colonie in 1824), although he found his fortune way out west — a little thing called the Central Pacific Railroad, the governorship of California, a US Senator’s seat, and much more. He drove the golden spike that finalized the transcontinental railroad. And while certainly a success, his father was also a notable success, if considerably less well known. He owned at least three prominent structures in the area, and the estate that he called home still stands.

His father, Josiah Stanford, was a well-off farmer and a tavern keeper on the Schenectady road, who held some considerable farmland on the Lisha Kill and in Roessleville. The Dictionary of American Biography, in its entry on Leland, says that Josiah, birthdate unknown but who died April 19, 1862, was “a native of Massachusetts and a man of means,” a descendant of Thomas Stanford who settled at Charlestown in the seventeenth century. Josiah and wife Elizabeth Phillips had seven sons and a daughter, though the daughter and one son died early on. One of the sons was named DeWitt Clinton (born 1826, the year after the Erie Canal had opened), and another was Jerome Bonaparte, born 1829. 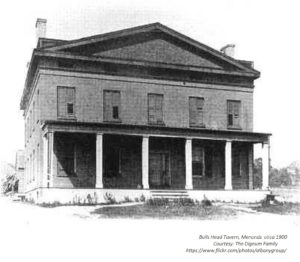 Leland’s obituary called Josiah “a prosperous farmer of good American stock, with a lineage going back to the early colony days, who kept the little white tavern on the turnpike, which is still standing near the railroad crossing above West Albany, and later the Bull’s Head tavern on the Troy road. He was also a contractor.” The “little white tavern” was the Elm Grove Hotel in Roessleville, just beyond the New York Central underpass at the city line. The location of the Bull’s Head Tavern is harder to nail down, but appears to have been around Simmons Lane in Menands. An advertisement in the Albany Argus from 1842 provides details:

“Bull’s Head — J. Stanford & Son would respectfully inform their friends and the public in general that the new Hotel by the above name, of which they are the proprietors, was opened on Wednesday, the 1st day of June, and is now in operation. The whole establishment has been got up with a view to accommodate those who deal in CATTLE, HORSES, &c., as well as those who wish to find a comfortable place of resort from the hustle of the cities. Connected with the houses are five hundred acres of land, three hundred of which are intended for pasturing; its location is convenient and agreeable, being situated about one mile north of the city of Albany, on the Troy road, and thus securing the advantages of the two markets for live stock. Cattle and Horses will be received on Commission, to be sold at auction, or otherwise, as may suit the disposers of the same. Albany, June 1842. Josiah Stanford. Chas. Stanford.” 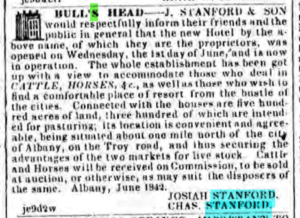 Josiah was also the first president of the Congregational Church, which later became Roesselville Presbyterian Church. (A modest structure, it appears to at least partly date to 1853, with a number of additions and renovations throughout the years.) An obituary for Leland Stanford in the Washington DC Evening Star credits Leland’s interest in the railroad to his father’s early support for what was the first railroad in the country. “His father, besides cultivating a farm, was a contractor for building bridges, and was one of the earliest advocates of the construction of the Erie Canal. When the locomotive engines first came into existence Josiah Stanford was among the most active in pushing the enterprise for the construction of a railroad from Albany to Schenectady and did a great deal of the work of construction. This railroad, fifteen miles in length, now forms one of the links in the great system from the Atlantic to the Pacific, which is a monument to the skill, enterprise and determination of the son, Senator Leland Stanford.”

A Times-Union article from 1968 raises the interesting idea that Josiah moved his inns around trying to best capture the already diminishing stage coach business on the Albany to Schenectady road, a turnpike at the time, with the toll gate just beyond the hotel he established at Elm Grove. In 1836, he rented from the Van Rensselaer estate “a tavern stand and farm on the Schenectady turnpike,” paying $150 for one year’s rent. In 1840, he bought the property, known as the Elm Grove Farm. (The Elm Grove hotel stood until 1941.) But in 1842, Josiah and son Charles advertised the new hotel known as the Bull’s Head, so he was expanding quickly.

Josiah started out fairly prosperous and definitely built on his wealth. With two inns under his control, he bought an estate on the King’s Highway near Schenectady from the estate of John I. Vrooman around 1845. Part of the main building dated back to about 1791. The estate was known as “Locust Grove,” and remained in the Stanford family until 1923, when it was purchased by the Ingersoll Memorial trustees and opened as a home for “aged men.” Incredibly, the building still stands, though not where it once was. It has been moved at least twice to make way for shopping plazas because of its prominent location at Balltown Road and State Street. In 2011, it was turned into a Berkshire Bank, a somewhat pretty and well-maintained brick building surrounded by another hideous shopping plaza. You’d never know its history. What the inside looks like, we couldn’t guess.

“We cannot refrain from calling attention to a fact stated by our reporter in our market report of this morning. Mr. Josiah Stanford, living in Watervliet, about four miles from this city, sold on Saturday, about 2000 bushels of his crop of Wheat, raised on his farm where he resides, for flouring at the Patroon’s Mills, at 99 cents. We saw a sample of the wheat and must say we never saw finer raised in any part of the United States. It will, it is judged, average over 62 lbs. to the bushel. Mr. S. has raised for two or three years past large crops of wheat, for which he has received the highest prices paid in this market. Mr. S. is a scientific as well as a practical farmer, and deserves great credit for the vigor which he imparts to the farming interests. Why will not more of our farmers follow his example, and make this a wheat growing country? It can be, and it ought to be done.”

A long time ago we told the story, possibly apocryphal but delicious nevertheless, of how some local pettiness caused Leland Stanford to take the millions he intended for establishing a university in memory of his deceased son across the country. In all honesty, it’s unlikely that an unreasonable price for a plot at the Albany Rural Cemetery was what caused the Central Pacific Railroad magnate, former Governor of California and United States Senator to establish his university in Palo Alto, where he owned a residence and a major horse stock farm, as the Troy Press reported. That’s more likely to be part of a longstanding tradition of the Albany and Troy papers poking at their rival cities than anything to do with reality. It made good press then and now. Paul Grondahl, in his “These Exalted Acres,” adds the detail that Stanford wanted to build a grant monument and mausoleum, asking for 350 acres, the vast majority of the cemetery’s 467 acres. The cemetery was unable to accommodate, and Grondahl reports that neither could Stanford put together that much land around his family homestead, so he instead built the memorial to his son in Palo Alto, and christened it Leland Stanford Junior University with a $40 million endowment.