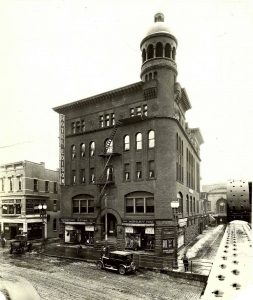 Our recent post on the founding of the Edison Machine Works in Schenectady led to a number of questions about the Edison Hotel, long gone from the downtown scene but once one of the Electric City’s most important public spaces.

The site, just east of Erie Boulevard on the north side of State Street, adjoining the now-lost Wall Street, was used for a public accommodation of some sort since at least 1798, when Arent Bradt, and later his wife, kept a tavern there. In 1825,  Resolve Givens built a tavern/hotel there, taking advantage of its location very close to the Erie Canal. Gazette columnist Larry Hart wrote that the old hotel burned, and Givens built a three-story brick tavern there in 1843 to replace it, and that the location between Erie Canal and the railroad depot was strategic: “As a result, it seemed that whenever anything of historical significance occurred in the city in those days, Givens Hotel was a part of it.” Known as the premier hotel of its day, it was the hotel at which Thomas Edison, along with Samuel Insull, registered on his first visit to Schenectady on August 20, 1866. Hart reports that Edison told the local press that he was in Schenectady “to see what kind of a ranch I bought.” That was just weeks after local businessmen had raised $7,500 to make up the difference between what Edison was willing to pay for two unfinished factory buildings and some land and what the Charles Stanford estate was willing to take for it. Construction was already underway, and the facility would be partly operational by December. 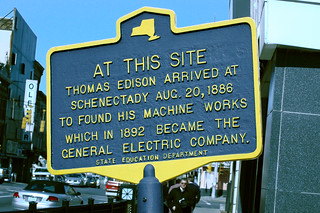 Perhaps ironically, the very success of the Edison works contributed to the demise of the Givens Hotel. The city was growing, and quickly, and the need for a larger, more modern hotel was apparent, so in 1889 the Givens was torn down and replaced with a new four-and-a-half story red brick hotel with all the modern conveniences, not to mention fire escapes. In it was one special room reserved for Edison’s use during his visits to Schenectady, though after he lost control of General Electric those were few, and prior to that he famously napped at the shops rather than walking back to the hotel for sleep.

It was a lovely place in its own way, and also featured prominently in civic life. The Edison was built by the Schenectady Hotel Association, a group formed by local businessmen solely to create this new facility for the advancement of business in the city. They owned it until 1921, when it was sold to the Knights of Columbus, who continued to operate it as a hotel and public meeting space, sometimes even hosting boxing matches in the hall there.

What made it successful in the first place was also probably what doomed it – proximity to the railroad. While it was exceedingly common for hotels to locate immediately adjacent to railroad stations, and while that made for an easy walk, it did mean that guests were trying to sleep next to an active rail line.  Things were tough enough when the rails were at street level, but once the tracks were raised above State Street in 1905, putting the trains up on the same level as the guest rooms, there was a noted desire for accommodations on the slightly quieter Wall Street side. With the growth of trolleys and the general spread of the city, other accommodations uptown were considered more restful. The opening of the grand Hotel Van Curler in 1925 (which was built by the Schenectady Hotel Association, previous owners of The Edison) was pretty much the end of the Edison’s relevance for visitors to the General Electric, who now had a grand riverside residence at their disposal, much closer to the plant. The Edison became more of a residential hotel, and one that appeared with some frequency in arrest reports, while on the ground floor it housed successful retail space, including the Photo-Lab and Myer’s Company children’s clothing shop, which established there in 1929.

In 1936, it was decided to essentially reconstruct the Edison Hotel, and turn it into the Edison Building. The Gazette reported:

“The front of the building will be razed to the street level and a modern two-story building front erected. The reconstruction will do away with the tower which has been a feature of the architecture of the building, and the red sandstone steps which lead to the lobby of the old hotel. When completed, the building will have three stores on State street with offices on the second floor, and an arcade extending through from Wall street to the New York Central arcade at the rear of the State street stores. Entrance to the offices on the second floor will be through the arcade. In the rear of the building, the auditorium, formerly the main dining room of the hotel, will be retained and entrance to it will also be through the arcade. The first floor of the rear section of the building will be devoted to stores modern in appearance and appointments. The Myers Store, which occupied the store at the corner of State and Wall streets, will be extended to the new arcade with a modern front on State street and show windows on the arcade. The Whalen [sic: Whelan] Drug Company, which occupies the store at the corner of State and the New York Central arcade, will also undergo reconstruction and will extend to the new arcade. A new store will be located on the State street side in the center, replacing the old entrance.”

Although it appears that the Knights of Columbus still owned it during the renovations, it was then sold to the Metropolitan Life Insurance Company. Just a few years later, in 1942, the building was characterized as one of the most desirable sites in the business section, and was sold to James Cushing, who owned a number of State Street properties. 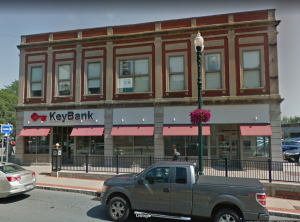 So for those who ask, “why did they tear it down?” – they didn’t. Not quite, anyway. The Edison Building is still there, and the last time StreetView checked (August 2017), it housed a Key Bank and an Army recruiting center.