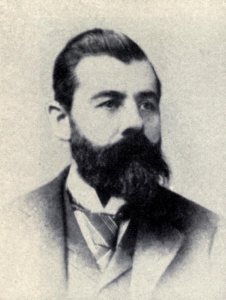 Last time we talked about Col. Robert Furman, who was critical in attracting Edison’s Machine Works to site in Schenectady. Today, his commercial building and his home still stand, and it seems likely enough that Furman street may be named for him. But the man who actually built the works, possibly the most skilled machinist of his day, and whose family had a long connection to the Electric City, is a name that we don’t believe we’ve run across in connection with Schenectady before.

John Heinrich Kruesi was born in Speicher, Switzerland in 1843, and trained as a clockmaker and instrument builder in Zurich and then Paris before coming to the United States and settling in Newark, New Jersey, where he came into contact with Thomas Edison and was given a job as a machinist. His great skill led to his work overseeing the construction of test models of Edison’s experiments. You’re most likely to run across Kruesi’s name when looking up the history of the phonograph.

Legendarily, in 1877, Edison provided him a rough drawing on which he wrote, “Kruesi – Make this.” Kruesi made the model device in a matter of days and provided it to Edison, who wrapped a sheet of foil around the cylinder, turned the cylinder, and shouted “Mary had a little lamb” into the mouthpiece. There were indentations on the foil; he adjusted the diaphragm, turned the cylinder again, and the sound came back out, clearer than he had ever expected possible.

When Edison worked on developing electric lighting in Menlo Park, Kruesi was put in charge of the machine shop there. Once the system went commercial, Kruesi managed the shop that made the “Edison tubes,” the underground wiring system that distributed power in the early central station system. In 1886 he became general manager of the Edison Machine Works, on Goerck Street in lower Manhattan. (All this courtesy of the Engineering and Technology History Wiki.) And when that works moved to Schenectady that same year, John Kruesi moved with it.

The Edison Tube Company and the Edison Shafting Company followed the Machine Works to Schenectady. Kruesi, as Assistant General Manager, was essentially in charge of the build-out of the plant. In 1887 expansions began, rarely to be interrupted for the next 40 years. There were 26 separate buildings by 1888 alone, and 750-800 workers. T.C. Martin wrote that the works then included “the building of Edison dynamos, the construction of Sprague electric motors … every branch of the insulated wire business … Sims-Edison torpedo work, the Edison processes for dealing with refractory ores, and a general business in shafting, pulleys, and hangers, and in millwright and foundry work.”

When General Electric was formed through the merger of Edison with Thomson-Houston in 1892, essentially taking Edison out of the picture, the well-known Edwin W. Rice came with Thomson-Houston and became technical director. Kruesi was promoted to General Manager; in 1896, he was named Chief Mechanical Engineer. While his name is easy to find in almost any history that involves Edison, not much detail about Kruesi is ever provided, and he seems to have mostly stayed out of the local papers as well. One mention years after the fact relates that:

“The river went on one of its periodic rampages in the ’90s, and the works were under three feet of water. Everybody went to work, including Manager Kruesi, who waded about in hip boots, his coat tails dragging in the water.” 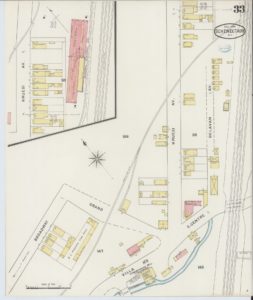 Kruesi was honored with a street named after him near the works; in the 1894 directory it is described as running from 164 Rotterdam Street to the “toll gate.” It didn’t last long, however; as soon as 1895, GE needed to expand, and, bound by the Erie Canal to the north, the direction that made sense was over Kruesi Avenue, onto land that had been used by the Jones Car Works, a rail car builder. It was critical, as the factory had grown so quickly and was so concerned about the land constraint that they were already talking about moving GE out of Schenectady. Electrical World reported that the corporate officers had determined it was impossible to erect the 1,000 to 1,500 foot long buildings they needed,  “and which the company should have in order to compete with manufacturers who do not have to cart heavy castings around a 30-acre lot from one building to another.” The Schenectady Board of Trade leapt into action, and $30,000 was raised from the community to buy the property and close Kruesi Avenue. Second Vice President Orr “said that he is absolutely of the opinion that the question whether his company should be allowed to have the road bed of Kruesi Avenue opposite its works, and the land between its land and the Delaware & Hudson Railway Company, is one of vital importance in the determination of whether or not the company will concentrate at Schenectady. He said that in his opinion if Kreusi Avenue can be closed,  the property required be ceded to the company, the largest electrical manufacturing establishment in this country will be located permanently in Schenectady, and in due time the number of men now employed will be doubled.”

Despite the lack of a street in his honor, Kruesi continued to be highly regarded. In 1893, Edison wrote to his former assistant, seeking to get him back from the company that had once been his:

“I suppose your salary is so large at Schenectady that you would not care to come and take charge of the Phonograph Works at six thousand per year. We are full of work but I haven’t a good man. Perhaps you could work it up to a good paying institution and we could arrange that you could get a percentage of the profits. You would be your own boss and I think it would be more pleasant here in the long run for you.”

He didn’t take Edison up on the offer. Edison also wrote him regarding his need for a young electrician, and said, “I hope by next year you will be able to leave the Light business and come with Batch and I into the mining business where you may be dirty but very happy.”

Kruesi spent most of his years in Schenectady living at 16 Union Street. His wife was Emily, who died in 1897; they had eight children: sons named August, John, Walter, Paul and Frank (all but Frank went to Union College), and daughters named Claire, Emily and Olga. The boys mostly went into industry of some sort. August was chief engineer in charge of power station design at the Schenectady works; he died in 1925. John Kruesi was president of American Lava Co. of Chattanooga, Tennessee; he died in 1930. Walter worked in charities, and was Schenectady’s charities commissioner for a time, taught economics at Union, was secretary of the Relief Tuberculosis Association in Boston and director of the Baby’s Milk and Hygienic Association of Boston. Frank was  president of Middlewest Utilities Co. of Evanston, lllinois. Paul was president of Southern Ferro Alloys in Chattanooga.

Unfortunately, Kruesi died rather suddenly, from influenza, on February 22, 1899 at the age of 56. The Troy Daily times reported that 4000 employees of the works attended the funeral, as did Thomas Edison. In fact, Edison and Samuel Insull were executors of Kruesi’s will. He is buried in Vale Cemetery.