When we talk about long-standing Albany piano makers, the name of Boardman and Gray comes up the most frequently. But there was another piano maker that lasted for about a century that hardly gets any attention at all, even though to this day their pianos are loved, played and sold – Marshall and Wendell.

The business started with Boardman and Gray, in a way. John V. Marshall was a piano builder for that firm; he and Amos C. James, presumably also a piano builder, left Boardman and Gray and formed their own partnership around 1853, with a workshop on James Street. In 1856, they added another (who may have left with them in the first place), Charles M. Traver, to the partnership, as Marshall, James & Traver. They were listed in an 1857 ad as being five doors north of Delavan House, 589 and 591 Broadway; the ad said:

“The subscribers, in calling attention to their piano fortes, would respectfully inform the public that the instruments made by them have not only received the highest [kind?] of praise, but where comparison has been experienced, and an examination instituted, as to … intrinsic merits, they have, in every instance, been preferred to all others …. Possessing tone not only rich, sweet and pure, but also very even, deep and powerful, they are peculiarly adapted to the Concert Room and Seminary, as well as the Parlor; and in every particular need must answer the wants of those who require a grand piano forte, and at the … secure to the purchaser a saving of at least fifty percent in the investment.”

The ad was accompanied by testimonials from Westfield, Lima, Ballston Spa, and Attica (all in New York), and the unsolicited opinion of two piano teachers and a violinist that it was superior to any they ever saw in Germany or America.

In 1858, Marshall, James & Traver advertised pianos using a new patented component, the Grand Repeating Action. They were prepared to fill orders for their “Unrivalled Piano Fortes containing Mr. Marshall’s Grand Repeating Action, Recently Invented, and Patented, June 8, 1858. They Claim for this New Action entire originality in its construction and infinite superiority in its Grand Results, over any and every other Piano Forte Action now in use.” (A repeating action is what lets a player repeat notes quickly, without having to reset the hammer to its original position. This was an important, but not unique, improvement.)

In 1867, John V. Marshall and Charles M. Traver were still in business together, working out of the Masonic Hall at 41 N. Pearl. (There was also a piano maker named John R. working at 32 James Street.) 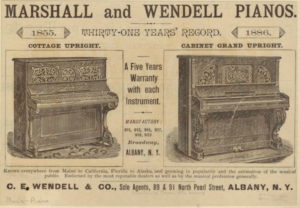 In 1868, Marshall partnered with Harvey Wendell, who had been in the saddlery hardware business with Elvin Taylor, and the firm became Marshall & Wendell. (A relation of Harvey, C.E. Wendell, seems to have independently operated a store selling pianos and organs at 68 North Pearl.) Some years later, the firm incorporated as Marshall & Wendell Piano Forte Manufacturing Company Ltd. in 1882, with capital of $100,000. The officers at that time were Henry Russell, president; Harvey Wendell, treasurer and manager; and John Loughran, secretary. Russell’s place was soon taken by Jacob H. Ten Eyck. Wendell was succeeded in 1896.  John V. Marshall, whose home was 96 Clinton Avenue, was listed as working for J. Loughran and Company, at the same address as the piano manufactory. But in the directory, Marshall and Wendell Piano Manufacturing Co. Ltd. of 911-923 Broadway was listed under Harvey Wendell, manager and treasurer. An ad in the same directory listed John V. as superintendent, as he was listed for a few years thereafter.

Marshall and Wendell built its plant at 911-923 Broadway in 1872. Parker’s 1897 “Landmarks of Albany County” said, “It has a frontage of 145 feet and a depth of 175 feet. At this time the business was materially increased and the new plant afforded an enlarged capacity that has ever since been successfully utilized. The firm manufactures pianos in all kinds of fancy woods, warranting them for five years, and maintains a large trade throughout the United States and Canada. They make strictly high grade instruments, finer than were ever made in the history of the company, and among their agents are many of the largest and most prominent piano houses in the country.”

And where the Boardman and Gray facilities seemed to burn with some regularity, Marshall and Wendell’s building is still there, one of those pleasantly anonymous old buildings along a stretch of Broadway most of us don’t have occasion to walk past, and so likely we would never pay it any mind. But it’s still there, the second building south of Thacher.

Given the prominence of the business, it’s a little surprising that we can’t seem to find much evidence of the lives or deaths of Marshall or Wendell. Or about the later history of this company. Several piano history websites say the company remained in business until at least 1953, when the brand name was sold to Aeolian-American Piano Corp., and manufacture was moved to Rochester. But that doesn’t appear to be quite what happened.

In 1899, Marshall & Wendell disappears from the directory. At the same Broadway location is a new company, The Raymore Piano Company, with Henry J. Raymore as president and manager, E.N. McKinney as secretary and treasurer, and James McKinney as a shareholder. (The McKinneys had their fingers in most of the businesses on that block, including the Architectural Iron Works to the north and the Standard Emery Wheel Co. to the south.) John V. Wendell disappeared from the directory that year, too, and Harvey Wendell, still living at 14 Jay Street, has no occupation listed. We learn from Henry Raymore’s obituary that he came to Albany and manufactured the Raymore piano, but it looks pretty clear that he must have somehow bought Marshall & Wendell, or at least their building. In 1900 the city directory says that Henry Raymore “removed to Brooklyn.” It also says that Harvey Wendell died June 23, 1899 (age 68).

In 1900 it was reported that “a syndicate of Rochester capitalists have purchased the plant belonging to the Raymore Piano manufacturing company on Broadway and will assume charge of the establishment on or about October 10th.” The company sold its piano stock at factory cost. In 1901, Thomas’ Music Store at 15 North Pearl said they had just bought out the Raymore Piano Factory. “The entire stock of these costly and expensively built Pianos are now on exhibition, and are offered at less than is usually asked for a cheap piano. Now is the golden opportunity to get a Piano, cash or installments…”

But in 1901, both piano companies are listed at that address in a tax assessment (Raymore valued for assessment at $10,000; M&W valued at $50,000). Now Raymore isn’t in the directory, but Marshall and Wendell is. In 1902, they’re both gone. We suspect that it was somewhere in this period that Marshall & Wendell as a brand went off to Rochester – perhaps as part of what was sold with Raymore to those Rochester capitalists, although the Aeolian-American Piano Company’s Rochesterian forerunner Foster-Armstrong, didn’t come into being until 1905. This site says that Marshall & Wendell didn’t join Aeolian until the Great Depression, but it does appear to have continued until 1953. The Broadway property owned by Raymore was foreclosed on in 1903, and subject to a court action (Harry Leslie v. Raymore Piano) in 1904. In March 1903, B. Payn’s Sons Tobacco Company purchased the Raymore Piano Factory through the foreclosure action for $10,500. However it happened, piano manufacture was over at that site, and we find no further mention of either Raymore or Marshall and Wendell. Our guess would be: Raymore bought Marshall and Wendell and perhaps continued it as a separate line; when Raymore was sold off to Rochester, Marshall and Wendell went with it.

You can find any number of videos of vintage Marshall & Wendell pianos being played on YouTube, though all of them seem to be post-1900 and therefore not of Albany manufacture.

For their prominence, it’s pretty surprising how little mention of Marshall or Wendell we can find. Wendell was a prominent churchman, and his obituary mentions more about his relations to the Methodist church “as a prominent layman and popular lay preacher” than his prominent piano manufactory.

Henry James Raymore’s obituary, we can find. The Sept. 3, 1929 Nassau Daily Review noted his death the day before at 72. It said he was born in Worcester, Mass in 1857, was moved to Canada as a boy, and later to Erie, Pa., where he entered the piano business. He manufactured the Raymore piano in Albany, then moved to Brooklyn and then Freeport, Long Island, where he was a bookkeeper in the Hempstead town supervisor’s office for the last 12 years of his life. He lived in Freeport for 30 years and “at one time conducted a piano sales room in the village.”