Hoxsie departs from its love of Albany, Schenectady and Troy history for a brief foray into offset printing history –

Some recently reached out to a page I administer for the AM Varityper Phototypesetters, sending along some pictures of something that had been in his house since he bought it ten years ago. And at first blush, the pictures certainly looked like somewhat standard phototypesetting discs – except that they were made of metal, rather rough on the edges and in the center, and not in any way transparent. So while they looked like the discs that were used to create phototype, that’s not what they were. 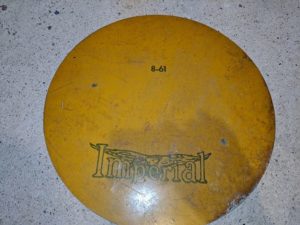 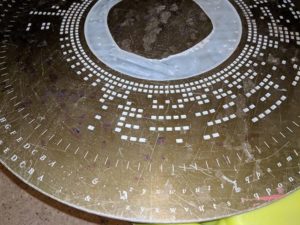 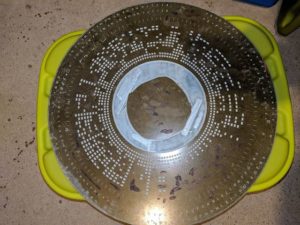 He said they were 16.75 inches across and more than 1/8 inch thick. The fronts certainly look like something that would be familiar to anyone who ever set phototype. There are alphabet characters (I can’t identify the font exactly, but it’s a fairly standard style in the vicinity of Garamond). Then, there are little rectangles, in rows of 8, associated with each character, and a smaller set of two more running just inside near a central circle. Clearly, these are codes that let the machine identify where the disc is positioned – in a phototypesetter, these discs would spin quite quickly, and when the needed letter was in front of the light source, there would be a flash of light to expose the character onto the sensitized paper on which the type was set. You think digital is amazing? These things were photomechanical wonders. The back, interestingly, has a wonderful logo that just says “Imperial.” So, I can only deduce that what we’re looking at here is a master – the form from which a phototypesetting disc was made. The disc itself would have been either glass (as some of the larger ones were) or plastic film.

At first, I didn’t find much looking for “Imperial” and “phototypesetting.” Then I had the flash that may be Imperial just supplied the metal, and not what was on the other side. That turned out to be incorrect, but led me to the right company anyway. Imperial is the Imperial Type Metal Company of Philadelphia. Formed as the Imperial Metal Co. in 1913, it was renamed as Imperial Type Metal Co. in 1915. Founded by a Wilson S. Yerger, specializing in the manufacture of metal that was used in creating type, focusing on its metallurgical expertise. 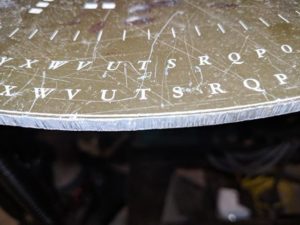 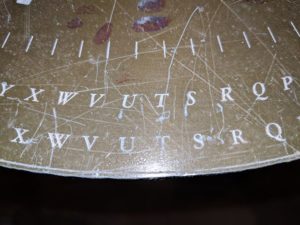 Then there was another flash – perhaps Imperial, experts in printing plate technology and innovative metallurgy (etching in aluminum was a challenge) just made the masters for some other phototype company? So I started by searching for Photon, the company that started it all and with which I was least familiar. A nifty little history of Photon I found mentioned a phototypesetter by Harris Intertype:

The Harris phototypesetter, called a TXT, was about eight feet long, four feet wide, and six feet tall. The fonts were on a half dozen platter-sized glass plates spinning at high speed at the ends of radial arms that rotated around when a type face change was called for. These monsters were used by newspapers well into the 1980s.

Platter-sized, you say? Intriguing – because what I was looking for, 16.75 inches across, would qualify as platter-sized. It would also appear that the Harris machine used an eight-hole punch tape for its coding (punch-tape machines used in typesetting varied between six and eight holes across for coding). Now, I just needed to find an image of the Harris-Intertype disc. What are the odds of that? Ahh, it’s the age of the internet; the odds are fairly high. And while the book I needed, David Jury’s “Reinventing Print: Technology and Craft in Typography” isn’t fully available online, its preview was enough – right there is an image of the Harris-Intertype Fototronic disc. Characters on the outside, code boxes on the inside, and a good-sized disc: looks like the Fototronic is at least a close relative of the master we were looking at. So at this point I’m pretty sure this is an Imperial master for a Harris-Intertype phototypesetting disc. 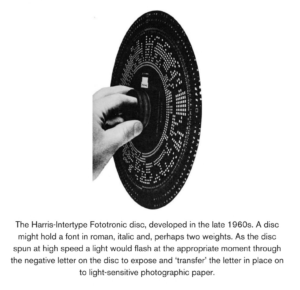