While we were nosing around Pruyn Street through the miracle of StreetView, we noticed that while all the buildings that were occupied by The Embossing Company, National Bonsilate, and many more are long gone (and replaced by a Holiday Inn Express), one (really, two) of the ancient factory buildings across Pruyn Street still stands. And it turns out it was home to a business we’ve been meaning to write up for some time – the Dayton Ball Last Company.

Way back when, shoes were largely made locally. As industrialization progressed, some parts of shoe manufacture became specialized, including the creation of the last – a foot-shaped model of hardwood or iron around which the shoemaker built the shoe. While some shoemakers insisted on making their own lasts, many did not, which allowed the growth of specialized last makers, such as Dayton Ball. 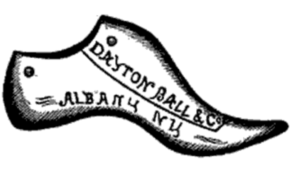 The business was founded in 1828 by Jared Holt (according to “The Empire State: Its Industries and Wealth”); in 1857 George H. Graves became a partner, and in 1864 the firm became Graves, Ball & Co. On the death of Graves in 1882, it became Dayton Ball & Co. In 1888, they had branch offices at 65 Park Street, NYC; 318 Cherry Street, Philadelphia; 35 Monroe Street, Lynn, Mass.; and a warehouse on Broadway. “The firm use chiefly in the manufacture of their lasts the wood of the persimmon from North Carolina. Few manufacturers in the United States use this wood, which is unrivalled for durability, fineness of grain and uniform excellence. Maple and iron are also employed extensively, the firm making a specialty of fine lasts for machine sewed and hand made boots and shoes.” Their trade was said to be worldwide, and the factory could produce 2,500 pairs of lasts weekly. Howell, writing about the same time, says the factories were at 3 Pruyn Street, employing 25, and 12 Elm Street, NYC; they put out about 125,000 pairs of lasts a year.

An article in the Aug. 10, 1892 Boot and Shoe Recorder provided us with some great details about Dayton Ball & Co., which was a partnership of Dayton Ball and D.C. Rebhun. “Their knowledge of lasts, of woods, of finish, of measurements and grade, of machinery, of the business which their product is best adapted, is a thorough knowledge, gained by a life-time of persistent effort .… Those shoe manufacturers who understand the practical phases of shoemaking, as well as skilled factory superintendents and cutters, will admit that Dayton Ball & Co. understand their business thoroughly. Manufacturers realize that they have but to give Messrs. Ball and Rebhun a hint of what they want to secure the style of last needed.”

At that time, they had just built their brand new factory – it is the rectangle to the left of the odd triangle that was likely their original building. Boot and Shoe Recorder gave us tremendous detail about what went on inside, which is missing from this Sanborn map because the building was under construction. 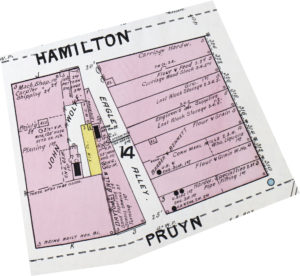 “The building contains 11,000 square feet of floor surface, is three stories high, well lighted and arranged for carrying on the large business of Messrs. Ball & Co. The office is on the first floor at the Union street entrance. The office and sample room is 30×36 feet. Fire walls separate different sections of the building. Beyond the office, on the same floor, are the turning rooms, two in number, being 24×84 feet, where ten lathes are run. The boilers and engine room are separated by a narrow passage way. The boiler room is 40×18 feet, supplied with a new boiler, the engine room 26×24 feet, also new and especially for this business. On the second floor is the scouring room, 60×24 feet, the stock and supply room 31×46 feet, the packing room, 24×26 feet, and one of the model room, 30×33 feet. The third floor is well lighted, having a skylight in addition to the numerous windows. Here is located the finishing room, 60×24 feet; the second model room, 30×33 feet; the sawyer’s room, 24×26 feet, and the ironer’s room, 31×26 feet. The building is supplied with its own electric plant, besides gas, and the elevator is supplied with safety gates and hatches. We can congratulate this house on the many improvements of the day. They now have an excellently equipped factory. The old factory is still retained as a storage room for blocks. The firm has ample room for an increasing business. They are placing in position a Sturdevant [sic] fan for removing all dust. The firm is still running their roughing machines up in the North woods.”

(We had to [sic] that Sturdevant reference, lest you think the Albany family of Sturdevants had some connection to what claims to be America’s first fan company – Sturtevant, founded by B.F. Sturtevant, a former shoemaker who developed a fan to deal with the “quantity of fine wood dust which annoyed the workmen.”)

The old building was an odd triangular appendage, which still stands to this day. It ran back from Pruyn Street along something called Eagle Alley, which was deeded to the city for use as a public alley in 1873 by the heirs of Edward C. Delavan, of Delavan House fame. Across Eagle Alley was the Broadway warehouse, where we can see two buildings that included storage of last blocks.

An article on the company in 1895 said that Dayton Ball & Co., “located at 58 Liberty street and 63 and 65 Union street,” employed 75 hands and turned out 600 pairs of lasts daily, “principally for fine trade.” It noted that there was also a plant at Northville, “where the blocks are roughly turned before being shipped to Albany, also a large storehouse in North Carolina with an agent located at this point. One feature attending this firm’s business is their factory is always busy when others are closed down. In the dull season, owing to the constantly increasing demand for their work. Mr. Dayton Ball is the originator of the standard measurement of lasts adopted throughout this country, and he is a citizen of whom every city should feel proud, being of a broad and liberal mind. It has always been his aim to encourage every industry beneficial to Albany.”

Dayton Hall was born in Lancaster, Pa., August 8, 1833, and educated there. According to his obituary, “when he reached his majority he went to Philadelphia,” then to New York, and then to Albany in 1863, where he went to work for Graves, Holt, and Ball. He was a very active Mason, and a noted amateur photographer who was active in the Albany Camera Club. By all accounts, he was beloved. He died in July, 1897, and the Masonic tribute to him was positively gushing.  A brief article in the Evening Journal by a contributor who signed his name “The Vagrant” wrote:

“The Vagrant province is to talk of matters of the town in the way of news and gossip. Ordinarily, merry stories come in his way, but sometimes the clouds of sadness fall upon his pencil. To-day there are many sad-eyed men in Albany. Scores of citizens mourn the loss of a man among men, a gentleman among gentlemen, a friend among friends. ‘Dayton Ball is dead’ was the salutation and then came the handshake and the sorrowful glance through misty eyes. The flame of the candle flickers, dies and all is dark. The sun passed out of sight behind the western hills, but the gleam of his glory remains in the night and comes again in russet mantle to gild the peaks of the Orient. Dayton Ball was the personification of the warmth, the confraternity that makes all the whole world kin. Peace to his noble ashes.”

His last home was at 202 Hudson Avenue, just east of South Swan and now, of course, underneath the Empire State Plaza. After his death, in 1899 the partnership was dissolved, and the firm, which also had operations in Cincinnati, became D.C. Rebhun Company, 58 Union Street. However, we haven’t found out how long it lasted after that. We find ads for it in 1902, but in 1903 it was reported that the Salvation Army was looking moving in to the building “recently occupied by the Dayton Ball Company on Union street.”