Last time we went over the history of John Wesley Hyatt’s many adventures in celluloid. When we first wrote that up several years back, we were absolutely baffled not only by the number of little companies that were formed to turn his plastic to practical use. But also by their actual locations. For instance, the business of making dominoes, which started in the Hyatt Manufacturing Company, became the business of the Albany Embossing Company, incorporated Jan. 22, 1870. It was formed by Charles Lansing, Robert H. Pruyn, John Townsend Lansing, Robert C. Pruyn, and Charles W. Hyatt, John Wesley Hyatt and Isaiah Hyatt. Over the years, the company made many products, starting with dominoes and checkers embossed from the new celluloid. Later they made things like embossed alphabet blocks, toy building bricks, and plastic toys. There are conflicting stories of which Hyatt brother ran the company, and of when the Thompson brothers took control along with Robert Pruyn; the Thompson name was long associated with the company. That firm, later just known as The Embossing Company, gave an address of 4 and 6 Pruyn Street – but so did Robert Pruyn’s Albany Saw Works, so while we understood that at some point Robert Pruyn gained control of the Embossing Company, we were confused by how these two very different operations could share an address. Well, they didn’t, quite, but they were part of a sprawling complex of interconnected buildings.

Anyone could be forgiven for not knowing where Pruyn Street is – today it is one of the more forlorn streets in a particularly forlorn section of downtown. Thanks to the new availability of the Sanborn maps through the Library of Congress, we can unveil an awful lot of Albany history that has previously been hidden. Sanborn produced fire insurance maps, a very specialized activity that provides an enormous amount of physical detail about our cities as they were a century or more ago. (No, nothing like this exists today – more’s the pity.) And from the 1892 Sanborn map of Albany, we can get a look at what was one of the oldest blocks of the city at the time, and one which is now entirely gone; the site is now mostly covered by the Holiday Inn Express. On the north was Pruyn Street, and Broadway to the east; Liberty Street to the west and a brief stretch of Madison Avenue to the south. In this block, depending on how you want to count, there were at least 25 buildings, as well as a coal shed.

In 1892, anyway, we find another related business at the actual doors listed as 2 and 4 Pruyn Street: The National Bonsilate Button Company, organized in 1878. Bonsilate was another product created by John Wesley Hyatt, a composition of ground bone and sodium silicate used as a substitute for ivory and wood, and here in Albany primarily made into buttons. The company seems to have little to do with Hyatt, however; it was headed by Robert Pruyn and Peter Kinnear, the brass founder, who was also in the billiard ball business with Hyatt. While the company seems to have gone under in 1888, it still appears on this map as a going concern.

Just below that on Broadway is the Albany Iron and Machine Works, which we’d be tempted to say had something to do with Pruyn’s Albany Saw Works, but apparently it was a different concern, a venture of Jones, Haskell & Co., which in 1867 had had an address at 8 Pruyn, around the corner, as well as 50, 52, 54 and 56 Liberty.

But further west down Pruyn, at the corner of Liberty, we have the complex of buildings that were occupied by The Embossing Company. Where exactly was the front door? That’s unclear. At 14 Pruyn was a four story building – stamping on the first floor, store room, shipping and office on the second, packing on the third, and printing on the fourth. On the interior, all these buildings seemed to connect – the Sawing Room of the Embossing Company seemed to connect to the Albany Steam Laundry, for example. The lumber storage was, very oddly, in a “landlocked” building at the center of the complex. Thanks to additional information on the map, we learn that the night watchman at the Embossing Company carried a Buerk clock and had to check in at 11 stations. The lights were gas, the heat was steam from a coal and waste boiler. There was a Walworth sprinkler system throughout – except in the lumber storage building – supplied by a 3000 gallon tank on the roof. The tank and boiler took water directly from the river through a 6” main – “no conn[ection] with city water.” Interestingly, the Bonsilate Button Company, the Albany Iron and Machine Works, and the steam laundry all took their power from the embossing company, which had a 125 hp generator. In fact, their engine ran all kinds of nearby industries – and was cited in the death of a girl who worked in the Stephens shirt factory on Pruyn Street in 1889. Annie DeGroat, whose age was not given, got a sleeve caught in a belted machine driven by the Embossing Company’s engine, and was killed.

“It is thought by some that if somebody had been there who had sufficient presence of mind to cut the belt that the girl’s life might have been saved, while others think that she was killed almost instantly … The Embossing company furnishes steam power for all the various kinds of business in the block, and not a single place is connected with the engine room by signal. A similar accident is liable to occur there at any time. The door to the room which is occupied by the Embossing company is always locked and entrance is gained only by ringing a bell. Sometimes that signal is not answered very quickly and it so happened in this case. This caused considerable delay in stopping the machinery.”

We didn’t have to look too hard to find several fires at the company; one in 1870 resulted in two deaths and several injuries. There was an explosion in 1945.  A fire in 1949 started, not shockingly, in the drying ovens. The business was sold to a Chicago company, Halsam Products, in 1955, and the buildings were vacated in 1956. Vacant, one of the buildings burned in December 1958, and there was a three-alarm fire in another section two months later in February 1959 that resulted in the end of the buildings. “The Albany Building Department last week issued permits for the demolition of the buildings at 56-60 Liberty Street, 8 Pruyn St., and 306-308 Broadway, portions of the Embossing Company plant.” So that was the end.

We’ve only found one photo of this complex – this one, from the Albany Institute of History and Art archives, which they dated as 1910. The sign for the Embossing Company adorns what shows up on the map as the National Bonsilate Button Company at Pruyn and Broadway – not surprising that Embossing had expanded into Bonsilate’s old space, as they were a very successful company for decades. The sign above for Harbutt’s Plasticine is just one of their many products, games and toys, which included dominoes and alphabet blocks. Several examples can be found at the Albany Institute’s collections page. 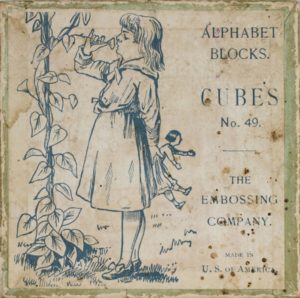 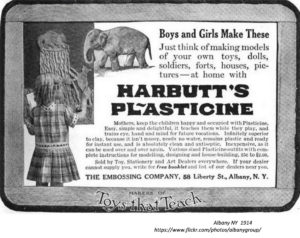 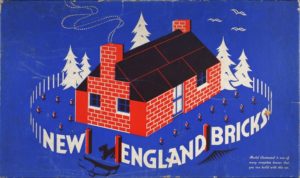 Here’s what the entire block looked like – all long gone. 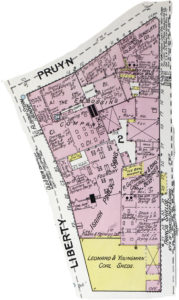