Last time we detailed the celebration around the installation of the Albany City Hall carillon in 1927, and noted that one of the prime movers behind that was William Gorham Rice, who was an interesting character in Albany history.

Rice (nearly always referred to by his full name in the newspapers of the day) was born in 1856 in Albany, son of Willliam Rice and Hannah Seely Rice, a descendant of early Massachussetts Bay Colony immigrants. He graduated from the Albany Academy in 1875, and married Harriet Langdon Pruyn, daughter of Congressman John V.L. Pruyn (and sister of Huybertie) in 1892. Rice held various government offices, starting in 1875 with an appointment by Governor Tilden as assistant paymaster general of the New York State Guard. He was secretary to Governors Grover Cleveland and David Hill. His advocacy of civil service reform and relationship with Grover Cleveland led to his appointment to the U.S. Civil Service Commission in 1895. In 1915, he became a member of the New York State Civil Service Commission, and served as president of that body in 1919-20 and 1931-1937, according to the New York State Library.

That’s interesting enough, but what’s really interesting is his sideline as an expert in carillons. The Albany Evening News proclaimed in a 1927 headline, “William Gorham Rice is Father of ‘Singing Towers’ of America.

“In every public spirited move there is an activating force – in many instances one man – whose enthusiasm and energy stirs fellow workers to achievement.

Belgium called its great primate and hero, the late Cardinal Mercier, the ‘Savior of the carillons’ because of his efforts to prevent their ruin during the World war.

Albany, with equal justice, may call William Gorham Rice, 135 Washington Avenue, the ‘father of the American carillon movement,’ which has grown from nothing at all to large proportions in fifteen years.

Albanians for years have known of Mr. Rice’s authoritative writings on carillons; they recently became better acquainted with him through his aid in obtaining the city’s municipal carillon, made financially possible by a fund raised by the Albany Evening News and The Knickerbocker Press.

Mr. Rice, through his books and magazine articles, his lecture tours and newspaper stories, ‘sowed the good seed,’ according to Frederick Rocke, carillonneur at Morristown, N.J., former Albany organist and also a writer on carillons …

‘Fifteen years ago, William Gorham Rice was guiltless of a book and innocent of literary aspirations,’ Mr. Rocke says. ‘His musical knowledge was limited and his pleasure in this art conventional and uncritical. On a holiday in Flanders, however, the music of the “singing towers” cast a spell upon him. In time the spell of the bells gave way to the urge of inquiry. “What are carillons? How did they originate? Is there a literature – a history?” were thoughts he must have pondered.

‘There was no history. The assistant keeper of the British museum wrote him “I know of no work on carillons.” Years of intense labor followed. Mr. Rice climbed the steps of a hundred or more towers, interviewed carillonneurs, searched town libraries and municipal records, waylaid every person and impounded every document germane to his purpose.”

Rice’s first book came out in 1914, titled “Carillons of Belgium and Holland.” Profits were given to Belgian war relief funds. The following year, he published “The Carillon in Literature,” still available today. It’s also online. It  was dedicated to Josef Denyn, a savior of Belgian carillons, founder of the world’s premiere carillon school, and the man who in 1927 would play the inaugural concert of Albany’s carillon. In 1925, Rice combined material from his earlier books into “Carillon Music and Singing Towers of the Old World and the New.”

Rice and his wife were of social importance in Albany. Rice was a trustee of the Dudley Observatory, vice president of the Albany Institute of History and Art, senior warden of St. Peter’s Episcopal Church, and member of the Fort Orange Club. He died in 1945 at the age of 88, and was buried in Albany Rural Cemetery. The bells he helped bring to Albany ring on more than 90 years later.

William Gorham Rice’s home was also prominent, and remains so. More on that tomorrow.

Special thanks to Paula Lemire for pointing out Rice’s memorial at Albany Rural Cemetery. It’s exceptionally fitting; she also notes that there is a band of tulips and images of bells on the bells. And further thanks to Paul Nance for giving us a closeup of the inscription, which raises the question of whether Harriet Pruyn Rice was given her due as a partner in the efforts to promote the bells. 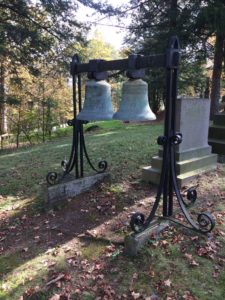 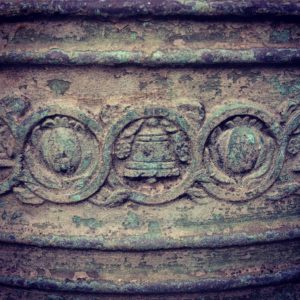 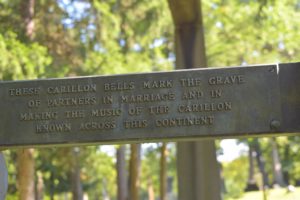