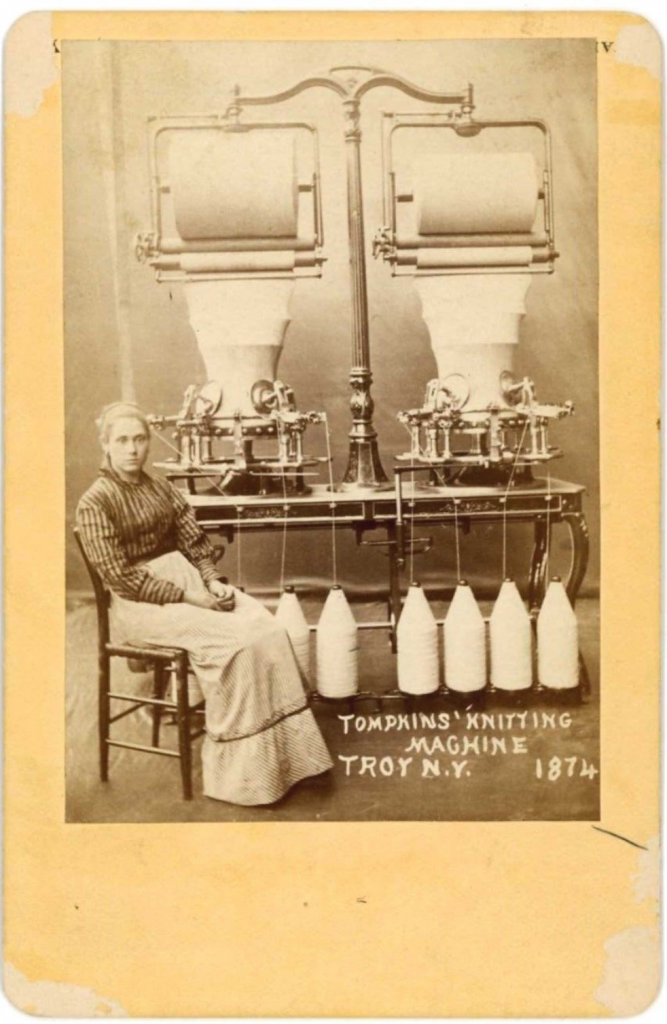 This is the Tompkins Upright Rotary Knitting Machine, one of a number of inventions of Troy’s Clark Tompkins. Incredibly, his business is still in business, still making knitting machines – but in the Salt City, instead of the Collar City.

Weise’s “The City of Troy and its Vicinity” (1886) tells the story of this business that was on Cypress Street along the Poestenkill:

“Tompkins Brothers, knit-goods machinery, foot of Cypress Street, south of Congress Street, near Ida Falls. The firm has for many years been manufacturing a number of ingeniously constructed machines extensively used in the United States, Canada, and South America in making such knit goods as women and men’s shirts and drawers. The Tompkin’s upright rotary knitting machine, invented and patented by Clark Tompkins, deceased, father of the members of the firm, is not surpassed by an other contrivance of its kind in its simplicity of construction and its adaptation to perfect the work for which it is so skillfully designed. Noiseless, direct in operations, it knits, revolves, and winds the material with so little superintendence that it fully merits the high commendation given it by numerous knit-goods manufacturers in all parts of the country. Another popular labor-saving machine, called the Tompkins’ cone winder, made by the firm, was patented in 1865 by George Bradford. It is used for rewinding yarn from bobbins taken from spinning jacks. It is a most desirable machine, especially valuable for the regularity of its delivery of yarn to a knitting machine, feeding the thread with uniform tension and making the knitting loops of equal length and elasticity in which other machines do not surpass it. The firm constructs many other patented machines used in knitting mills. The business of manufacturing mill gearing, looms for cotton and carpet mills, and general machinery was begun about the year 1846 by Clark Tompkins, in the brick building formerly standing on the site of the present one occupied by the Tompkins Brothers. The enterprising machinist not long afterward originated in Troy the business of making wooden letters for signs. By the burning of the building, on the morning of December 19, 1849, Mr. Tompkins sustained a heavy loss in machinery. After the erection in 1850, of the present building, 175 feet long and 45 wide, the Empire Machine Company was organized, of which Mr. Tompkins was superintendent until 1861, when he became proprietor of the works. On April 1, 1877, Albert and Ira Tompkins succeeded their father in the business under the firm-name of the Tompkins Brothers. The Poesten Kill supplies the establishment with a body of water of seventy-five horse-power, by a fall of twenty-five feet.” 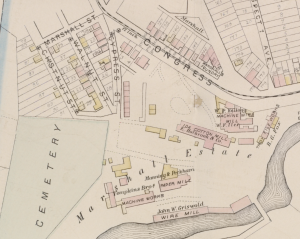 From 1853-1855,  Clark Tompkins was advertising regularly in the Troy Daily Whig: “Clark Tompkins, Empire Machine Company, Mount Ida, Troy, New York, Manufacturer of Machinery in general, Mill Work, Shafting, Hangings, Pulleys, etc., Turning Lathes, gear Cutting, Brass Castings, and a general variety of Jobbing, in the line of Experimenting and Machine Building. All orders promptly attended to.” In an area that was absolutely exploding in textile work, making not only knitting machines but all kinds of other machinery was a very solid business. Some 10 years later, he was still running the same copy.

Early on, Clark Tompkins had some sort of business arrangement with C.C. Bradley & Son of Syracuse. They were both manufacturing harvesters and other equipment patented by M.G. Hubbard. Bradley and Tompkins advertised Hubbard’s Harvesters together in The Country Gentleman in 1860. We mention this because it’s possible that this relationship had something to do with Tompkins leaving Troy for Syracuse in 1914. Incredibly, the Tompkins Company still exists to this day, still making circular knitting machinery. They say they’re one of the oldest manufacturers of such equipment, and we think it’s probably the second-oldest business with Troy roots, having started just a year after William and Lewis. Gurley (along with a Phelps, at first) began making precision surveying instruments in 1845. Gurley is still in Troy; Tompkins is still in Syracuse.

The Tompkins company website says that they moved to Syracuse in 1914 (and built the building they are still in in 1919), but we learned they didn’t actually move until 1918.

In 1909, the Syracuse Herald wrote that Raymond Carhart, the superintendent of the Tompkins Brothers’ Machine works of Troy, had been in Syracuse looking for a site to start a machine shop “and do a general tool making and jobbing business in addition to manufacturing several articles for the hardware trade . . . With him there will be associated in the new company H.A. Carhart, now employed at the Smith Premier Typewriter works in this city, and George Carhart, now with the Brown-Lipe Gear company.” Maybe this was intended as an unrelated breaking off of Raymond Carhart, to be closer to his family, but ultimately it laid the groundwork for a move of the entire plant.

In 1917, we find buried in the “Personal” items in the Troy Daily Times a mention that the factory would be moving: “Mrs. Samuel McKibbin and her son, F.W.J. McKibbin, will move early next month to Syracuse, where The Tompkins Brothers Company, of which Mr. McKibbin is President, will locate its works. They have been prominent residents of the East Side.” The lack of other mention of the loss of one of Troy’s most venerable manufacturers is baffling.

The Syracuse Herald gave the move a bit more play, headlining in December 1917, “New Plant Here to Give Work to 80 Skilled Men – Troy Knitting Machine Company Moving Its Factory.” This article, noting that the industry was entirely new to Syracuse, said that its move from Troy was “largely through the influence of R.H. Carhart, one of the three owners of the company. The other two owners are W.A. Ingalls and E.W.J. McKibbin.” Beyond the opportunity to perhaps reunite the Carhart family, no other reason for the move was given. The company would be taking the sixth, seventh, and eighth floors of the former Smither Premier typewriter factory on South Clinton street.

The move was not entirely smooth, as the Syracuse Daily Journal reported on May 30, 1918 that the combined weight of newly placed machinery in the loft of the Tompkins Brothers Company, 581-3 S. Clinton Street had caused the seventh floor of the bjilding to settle “several inches at an early hour this morning, tearing away several pipes and causing leaks in the plumbing fixtures.” The eight story building was the former headquarters of the Smith Premier (typewriter) Company. Perhaps this is what caused them to build a new building on Oneida Street.

In 1919, The Troy Daily Times has an article on the company that seems to have already forgotten they had roots in Troy, as it explains that the Tompkins Brothers “of Syracuse, manufacturers of knitting machines,” had purchased the Robert W. Gormly & Co. plant on Congress Street. “Tompkins Brothers moved to this city about two years ago and established a plant in the old factory yard near The Manning Paper Company.” That last statement simply makes no sense; the location next to Manning was where they had moved from, not to, and other than their purchase of Gormly, it doesn’t appear they returned to Troy.