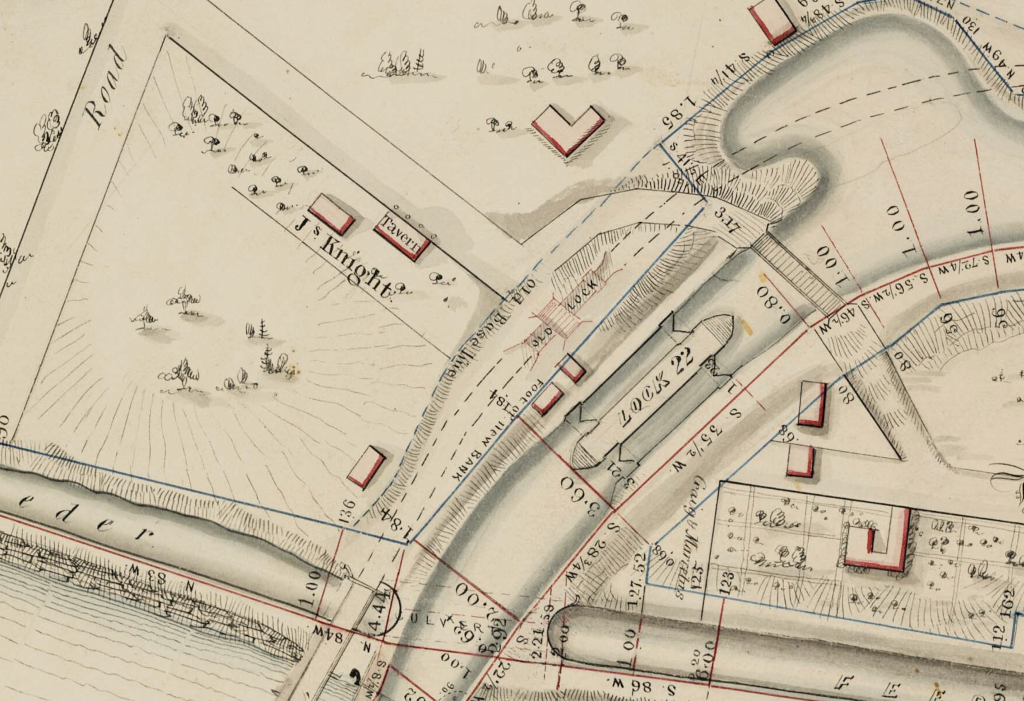 So many things to stare at on this beautiful map of Rexford and Aqueduct Crossing, from somewhere after 1842 when the original Erie Canal was expanded. The first aqueduct, now too narrow for the new specifications, was replaced by an entirely new aqueduct, and the narrow old lock was replaced by a double-lock, the new Lock 22.

Just to the west of the locks, old and new, we noticed the land and tavern of James Knight, and it made us curious. It turns out that James Knight was none too happy about the relocation of the lock.

A petition to the Committee on Claims indicated that Knight owned land at “Rexford-Flats, a short distance from the upper aqueduct, and directly opposite the upper lock, on which was erected a large and commodious building occupied as a tavern and grocery.” Location was everything, and “the site was rendered valuable by the unavoidable detention of boats at that place.” So widening the canal and doubling the lock was already not going to be in Knight’s favor, because boats would no longer be forced to linger, and the canal itself was going to be relocated to the west of its original course, pretty much through Knight’s grocery. So, he moved it. The Canal Commissioners appropriated forty feet of land in front of the tavern, and Knight moved his building. All cool, right?

Well, no. Because at some point after that decision was made in 1834, the Canal Commission changed the path. Instead of putting the new canal to the west of the existing canal, it would go to the east. That not only “leaves the petitioner much further from the enlarged canal, but forty feet farther from the old canal; that the use of said petitioner’s buildings has been worth much less since the removal; and that the basement room before removal would command a rent of $300, now not over $25 or $30.” To add insult to injury, “a building stands directly opposite that of the petitioner, on the other side of the canal, and is occupied for a similar purpose, and about the same distance from the canal the building of the petitioner was before it was removed. And the said building of the petitioner being now forty feet farther from the canal, it renders it almost useless for a grocery, in consequence of the building on the other side being now so much nearer the canal.”

We’re of the mind that people who were capable of life on the canal, arduous by all reports, were capable of hauling themselves an extra forty feet, but perhaps he had a point. An act was submitted to the Legislature and passed in 1842, requiring the canal to ascertain the amount of damages sustained by Knight going back to 1835. What was done, and whether he moved the Tavern again, we don’t know.