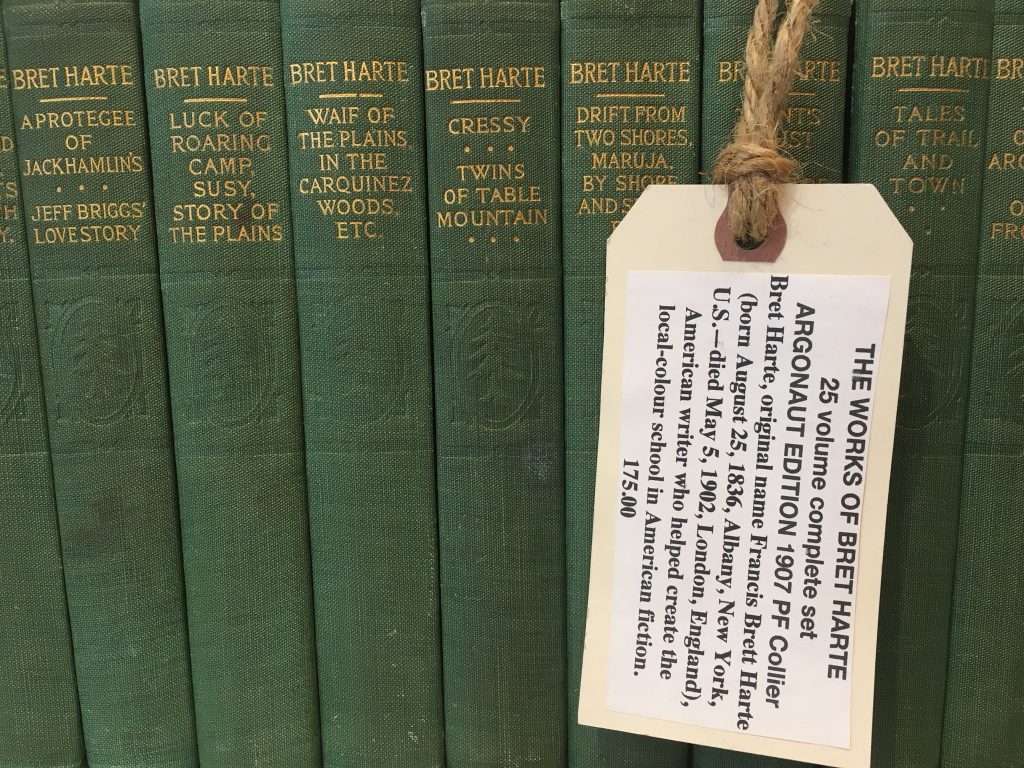 We were pleased and surprised to be wandering through the galleries of Lancaster, PA this weekend and to come across a prominently displayed set of Bret Harte books that made the connection to Harte’s origins in Albany. If he’s remembered at all today, it’s probably for “The Outcasts of Poker Flat,” an 1869 short story that, at least in Hoxsie’s day, was taught in the short story curriculum and has been turned into at least five movies and, oddly enough four operas. You can read it (or even have it read to you) at this Wikisource page.

Harte was born in Albany and lived here as a child; his writing all came after he had kicked the dust of the old Dutch town off his boots and replaced it with the dust of California. But his family had a strong New York pedigree, according to Axel Nissen’s “Bret Harte: Prince and Pauper.” Grandfather Bernard Hart  was one of the signatories to the agreement among New York City stockbrokers that created the New York Stock Exchange, and later was secretary of the Board. Around 1795 he became involved with Catherine Brett Jackson, a widow with two sons, of Dutchess County; Hart married her and fathered a child, Henry, in 1800. They separated soon after however, possibly amidst family disapproval of Catherine, of the Dutch Reformed religion, marrying a Jew. It appears they lived around Kingston, until Henry Hart entered Union College as a member of the class of 1820; although he finished, it appears he did not technically graduate. That would put him in the same class as Wiliiam H. Seward. Henry Hart married Elizabeth Rebecca Ostrander of Kingston; they married in Hudson in 1827. They had a daughter, Elizabeth Cornelia Thorne Hart in 1831, and moved to Albany two years later. Henry Hart taught at the Albany Female Academy, boarding at 289 North Market Street (Broadway). Son Henry was born in 1834. They moved to Columbia Street (Nissen says 15 Columbia; the ad seen here says 19) and Henry Senior opened his own school at Steuben and North Market. They were living on Columbia, on a block probably later obliterated for the railroad tracks, when Francis Brett Hart, known as “Frank,” was born on August 25, 1836.

Unfortunately, Henry’s school failed in the Panic of 1837, and they went to Hudson, the first of a number of moves as Henry chased teaching work in New Brunswick, Philadelphia, Providence, Lowell, Boston, and finally New York City, where the surname gained an ‘e.’

The New Netherland Institute says that Brett Harte moved to California in 1853, at age 17, and got work as assistant editor at the “Northern Californian” newspaper in Union, CA. Fiction writing followed, as did a friendship with Mark Twain before anyone knew him. Twain credited Harte with teaching him how to write: “he changed me from an awkward utterer of grotesqueness to a writer of paragraphs and chapters that have found a certain favor in the eyes of even some of the very decentest people in the land.”

Harte returned east in 1871, settling in Boston and writing for The Atlantic Monthly. Then he went abroad, serving as United State Consul in Krefeld, Germany, then in Glasgow; he settled in London in 1885. He lived in Europe for his last 24 years, dying in 1902. He’s buried in Frimley, Surrey, England.

He did make at least one return visit to Albany. In 1872, he was featured at the Young Men’s Association lecture course at the Martin Opera House, discussing “The Argonauts of ’49.” So Harte didn’t completely forget Albany, and Albany didn’t forget him – in 1902, Cuyler Reynolds listed him among the Albany authors who could fill a library.