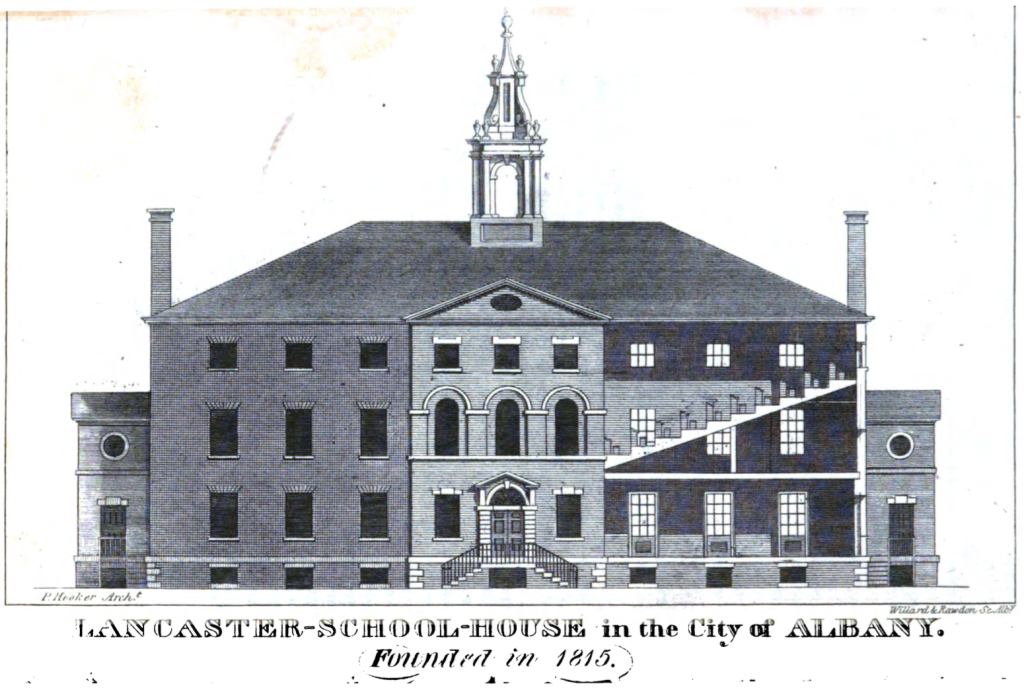 Recently we wrote about Schenectady’s Lancaster School, which pretty much controlled the shape of what would be thought of as public education in that city in the early 19th century. Schenectady wasn’t the only area city that signed on to the Lancasterian fad, which applied some definite ideas about how students were to be taught and used those who had already been taught to instruct their juniors, an efficiency that allowed them to employ a minimal amount of teaching staff while instructing large numbers. In fact, Albany had a Lancaster School several years earlier.

According to the 1829 report of the Trustees of the Albany Lancaster School Society, the Albany Lancaster School was first established by the corporation of the city of Albany in October 1811, with an annual appropriation of $400. The directors of the school were incorporated by legislation in 1812, and a provision of the common school act that was passed that year assigned state school money appropriated to the city directly to the trustees of the Lancaster School, “with a view to ‘the education of such poor children belonging to the city, as shall be, in the opinion of the trustees, entitled to gratuitous education.’ In addition to the general Lancaster school, a part of the above fund was appropriated in 1820, for the support of a school ‘for the education of poor children of colour.’”

The report also said that trustees of the Albany Academy would admit a certain number of pupils from the Lancaster School to gratuitous instruction in the higher branches of education, “as a reward of superior merit.”

The Albany Lancaster-School, has been in operation about five years. It has been taught, hitherto, in a room of 40 feet by 28, yet so fitted up, as to receive 200 scholars;–and it has never had less than that number. Since its commencement, 1100 have enjoyed the benefits of the Institution. Here have been taught Spelling, Reading, Writing, Ciphering, Geography, English Grammar, composition and Elocution, in the style of the best Academies of Europe. When the Teacher, Mr. W.A. Tweed Dale, arrived in this country, he was introduced to the Hon. De Witt Clinton, who having become acquainted with his character and abilities, wrote to Gen. S. Van Rensselaer; in consequence of which he was invited to Albany by the Corporation of this city, and engaged by them for six months. This led to the formation and incorporation of the Lancaster-School-Society; with a permanent appropriation of that proportion of the Common School-fund, which belongs to the City of Albany. The Corporation of the City also, appropriated $500 annually, beside a donation of 800 to defray the expense of fitting up the School-Room, &c.; resolving at the same time, to build a suitable School-House. And when we consider the large numbers that have been taught on this plan, at a comparatively small expense, and also the tendency of the system to form virtuous citizens, by training up the youth in habits of order and method; by habituating them to the discharge of relative and social duties; and in short, by introducing them in the business of real life; who can attempt to calculate the importance of this Institution to our City.

Spafford noted that Mr, W.A. Tweed Dale had come from the original school of Joseph Lancaster in England, and that he had added improvements of his own and others, “too numerous to be mentioned in this place.” He focused on the physical layout of the schoolrooms, which were an important feature of the Lancaster system.

The elevation of the desks, places every scholar in the most distinct and conspicuous point of view for the Teacher; while his Desk, placed so as to present nearly an equal space in front, and on each hand, affords the greatest facility in his communication with the whole school. The entrance for the boys, being at one end of the building, and that for the girls, at the opposite end, two schools, entirely distinct and separate may be taught in the same room. The apartments under the desks, will be of the greatest utility for this purpose, both before and between the hours of instruction. In these, those who come from a distance, may remain and recreate themselves, without injuring the furniture of the School-room; and neither sex will be seen or heard by the other. During School hours, these rooms may be used for recitation, and a portion of each as a ward-robe.

We shall only mention one improvement in the mode of teaching: this is Silent Dictation. Instead of having the words spelled aloud to each class, to be written on slate; they are pointed out by a Monitor, on a printed alphabet, in written letters. This is done without interrupting any classes that may have been called out to read, or cipher aloud, and without being interrupted by them. These may profitably join in concert, however, when the words that have been written on slate are spelled aloud. Thus all the school may spell the same word, at the same time: This is done after the word has been pronounced, syllabically, without repeating the syllables, but merely by calling the letters distinctly, and pausing a little between the syllables; – a method at once pleasing and instructive. Mr. Dale, the Teacher of this School, is probably as well qualified for his Task as any other, in any similar school in America ….”

Noting that the building had been designed by Albany’s most important architect of the era, Philip Hooker, Gates gave us a thorough description of the building that would later be the first home of the Albany Medical College:

The Lancaster School House, now erecting in the city of Albany, is situated on the west side of Eagle Street, a little south of the Capitol. It is a neat, plain brick Edifice, 100 feet in length, and fifty feet in width, with a small wing at each end for stair cases.

The first floor will contain a vestibule, hall, and stair case, and a room for the Trustees; in the centre and on one side, a room of 47 by 35 feet, for public meetings – and on the other, convenient apartments for the Teacher’s residence.

The second floor is the school room, 97 feet in length, 47 feet in width, and 21 feet in height. It includes the two upper tier of windows. The Teacher’s desk is placed in the centre, against the front wall, and elevated about 2 feet from the floor. The desks and seats for the scholars are ranged on each side, parallel with the end walls; – each rising one foot above the other, as in a church gallery: each stage 3 1-2 feet, gives room for a desk, seat, and narrow aisle between the seat and the next desk.

Opposite the Teacher’s desk, against the rear wall, a stage is elevated on pillars, with steps to ascend to the same, which is also fitted up with desks and seats, for such scholars as the Teacher shall think proper to honor with a seat there, as a reward for their assiduity ,and to excite emulation. There are rooms of 47 by 17 feet, at each end, under the aforesaid gallery, besides four lumber rooms under the front part of the gallery.

The annexed plate [the illustration above] is a Geometrical Elevation of the front, drawn to a scale of 20 feet to an inch. In this representation the front wall, to the right, from the water-table to the cornice, is supposed to be removed, in order to exhibit a view of the interior structure, with the elevation of the desks, seats, &c. in the School Room.

Schenectady’s Lancaster School lasted until about 1850 or so, when free public schools were established in the State. If Albany’s continued on, it had to have been at another location, as this building became the first home of Albany Medical College in 1839.