Since we were recently talking about the earliest schools in Schenectady, we should focus on the institution of higher education that grew out of those early efforts, Union College. It was founded in 1795 as an outgrowth (always anticipated) of the Schenectady Academy, which had started 10 years before. Originally, the college conducted classes on the upper floor of the Academy’s building on the north corner of Union and Ferry streets. The first trustees had prominent Schenectady names like Ten Broeck, Yates, Vrooman, Glen, and Romeyn, along with others; when the charter was amended in 1806, state officials were added as trustees, including the Chancellor, justices of the Supreme Court, the Secretary of State, Comptroller, Treasurer, Attorney-General and Surveyor-General. Later, the Governor and Lieutenant Governor were also named as trustees.

George Rogers Howell and John Munsell, in their 1886 History of the County of Schenectady, wrote that:

The name “Union College” was given as expressing the intention of uniting all religious sects in a common interest for the common good, by offering equal advantages to all, with preference to none. It is believed that this is the first college in the United States not confessedly denominational in its character.

It was originally organized October 19, 1795, with the election of Rev. John Blair Smith of Philadelphia as president; John Taylor, A.M., professor of mathematics and natural philosophy (today we call it science); and Rev. Andrew Yates, professor of Latin and Greek. First degrees were conferred upon three young men in May, 1797, in the old Reformed Dutch Church. Smith was followed by Rev. Jonathan Edwards (son of that Rev. Jonathan Edwards. Edwards began the effort to build a new stone building facing south at the northwest corner of the intersection of Union Street and what is now Erie Blvd. (This according to the Encyclopedia of Union College History). The building was unnamed but known as Stone College, later West College, and it was then on the eastern edge of the city (it picked up the “west” appellation once Union moved to its current location). It is thought the building was designed by Albany’s Philip Hooker, and that it was inspired by Nassau Hall at the College of New Jersey (now Princeton). Lack of money slowed construction. The trustees sold the Schenectady Academy building to raise money for the new one (but continued to hold classes there), and received assistance from the State. Edwards died in 1801 and was succeeded by Rev. Jonathan Maxcy, a Baptist from Providence, R.I., who left in 1804. The building was still unfinished.

Then came the Rev. Eliphalet Nott, whose impact on the Schenectady of his day certainly warrants discussion on its own. He came to a college whose future was far from assured. As the History says, Dr. Nott found the college wanting both means and students. Its proposed endowment was undersubscribed; sums of money came from the State, but a considerable amount of State assistance was in the form of land, including 10 lots of 550 acres each “in the military tract” [presumably the tract in the northern counties of the state, then still quite unsettled] for the support of the president and professors, and the sale of garrison lands near Lake George. The new building started by Dr. Edwards in 1798 (Stone College) was just being finished, and there was considerable debt. So the trustees did the logical thing and started planning for a much larger college, far out of the city. That actually wasn’t unwise, as the building was overcrowded by 1806. That may because the three-and-a-half story building contained classrooms, dining hall, a chapel, a central room, student dormitory rooms and a residence for the president, in addition to housing the Schenectady grammar school.

On Dec. 15, 1812, the city bought Stone College in exchange for 3000 acres of common lands in Schenectady County. It’s not clear if those included the land that the college soon built on, but much of it was sold off (and some city residents were highly critical of the exchange).
Union moved to its current campus in 1814. In 1831, it bought West College back from Schenectady, which had been using it for city and county offices, courthouse, and jail. The College pressed it back into service as classroom and dormitory space.

So, how did Union College end up where it ended up? According to the Encyclopedia, the trustees appointed Nott, Joseph C. Yates, James Duane and Abraham Oathout as a committee to seek a site for the college on “high lands bordering on the second ward of the city.” They were unsuccessful in getting a donation, and the college lacked the funds, so it was just fortunate that Eliphalet Nott happened to come into some money by way of marriage. His second wife, Gertrude Tibbits, was the widow of Troy merchant Benjamin Tibbits, a woman of means who apparently felt no compunctions about sharing those means with her new husband and the college. They assembled about 300 acres by 1812, at a reported cost of $13,692.96. North and South Colleges were built by 1814, and that took care of Union’s needs forever. Well, not quite.

In 1831, it bought West College back from Schenectady, which had been using it for city and county offices, courthouse, and jail. The College pressed it back into service as classroom and dormitory space.

For the next twenty-three years, Union was divided. Eventually, if not at once, freshmen and sophomores lived and attended classes in the old building, a peculiar choice on Nott’s part, given that the routing of the Erie Canal directly in front of Stone College in 1825 had made the city – from which Nott was much concerned to protect his charges – a seamier place.

New construction in the mid-1850s would allow the college to be consolidated once again and to once again sell West College to the city of Schenectady, which made it into the Union School, the first true public school in the city. The old building was finally torn down in 1890, replaced by the Union Street School, which only lasted into the 1940s. The site is now a parking lot with an historical marker noting the location of West College. 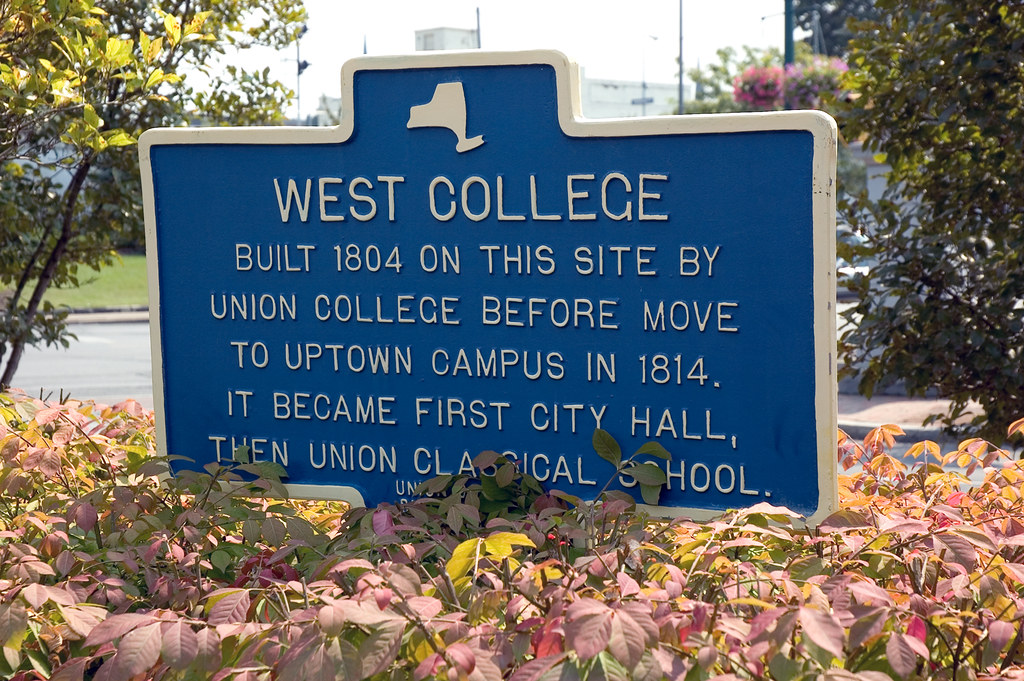 One thought on “Union College”