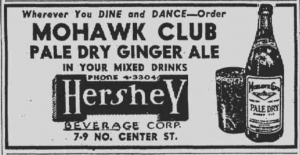 Time was when there were many, many local soda manufacturers. Yes, the national brands existed, but every city had a bottler or two that made up their own sodas. We ran across this ad and had to admit we hadn’t heard of Mohawk Club, or the Hershey Beverage Corporation.

Mohawk Club Ginger Ale and kindred beverages are manufactured under most modern and most sanitary conditions. Nothing but the best ingredients that money can buy are used and used scientifically in a clean, scientifically-controlled laboratory. One hundred per cent American refined cane sugar, the most expensive extracts and flavors, filtered carbonated water mixed in the right proportions are used in the making of Mohawk Club beverages . . . The Mohawk Club Beverage Laboratory is in charge of a chemist skilled in the art of beverage making. He has at his command a laboratory consisting of the most up-to-the-minute equipment, immaculately kept at all times and checked and rechecked in an effort to produce as near as possible a 100 per cent pure beverage. The bottling machinery used is the finest and most up to date, having only recently been installed. The bottling plant is fully automatic, the bottle not being touched by human hands after it is once put on the machine. The bottle is washed and sterilized in a 3 per cent caustic solution (New York state only requires a 2 per cent solution). In this process the bottle is not sprayed with this solution but lies dormant in it for 27 minutes and comes out as chemically clean and scientifically sterile as is human possible to accomplish. Each bottle is machine brushed under pressure three different times. It is the only machine of its kind in Schenectady, being used for the manufacture of large bottle beverage.

Hershey was the manufacturer of Mohawk Club beverages and they distributed Saratoga Vichy. Their offices and plant were at 7 North Center Street in Schenectady, just north of Union Street. The building still stands, as a nice-looking apartment building, with the insignia of the John H. Stock Bottling Works. In addition to pale dry ginger ale, they made orange, Tom Collins mix, sarsaparilla, cherry, lime rickey, root beer, birch beer, cream soda, and lemon sour.

We find mention of Mohawk Club as early as 1922, and in 1931 it was referenced as being from the John H. Stock Bottling Works. By 1933, it was clearly made by the Hershey Beverage Corporation – whether they were a name change, a buyout of Stock, or something else, we’re unable to determine. As early as 1937, they were selling a “dietetic” ginger ale, “sweetened with Saccharine to meet the requirements of leading clinics.” It appears that they filed for bankruptcy in 1955.