Before the age of synthetic colors (in which a Rensselaer factory played a significant role), colorants primarily came from minerals and earths. Prussian blue, which Wikipedia says was the first modern blue pigment that was stable and lightfast, was developed throughout the 18th century. (Here’s a very nice summary of its many uses.) It is easily made, but requires a certain type of iron. It turns out that Rensselaer County had just the right type, and appears to have been the source of all the Prussian blue in the state, from a factory owned by the Davis family for at least three generations.

Samuel Davis appears to have been the first to go into the business of making Prussian blue, but we’ve been unable to find out when. His son Aaron Davis was born about 1820 at the family farm in Cropseyville. While farming appears to have continued, the main business was clearly Prussian blue. In any event, the 1854 Balch map of Rensselaer County shows the “Howe and Davis Blue Factory.” The Rensselaer County Business Directory of 1870 lists Aaron as a manufacturer of Prussian blue and farmer with 100 acres. 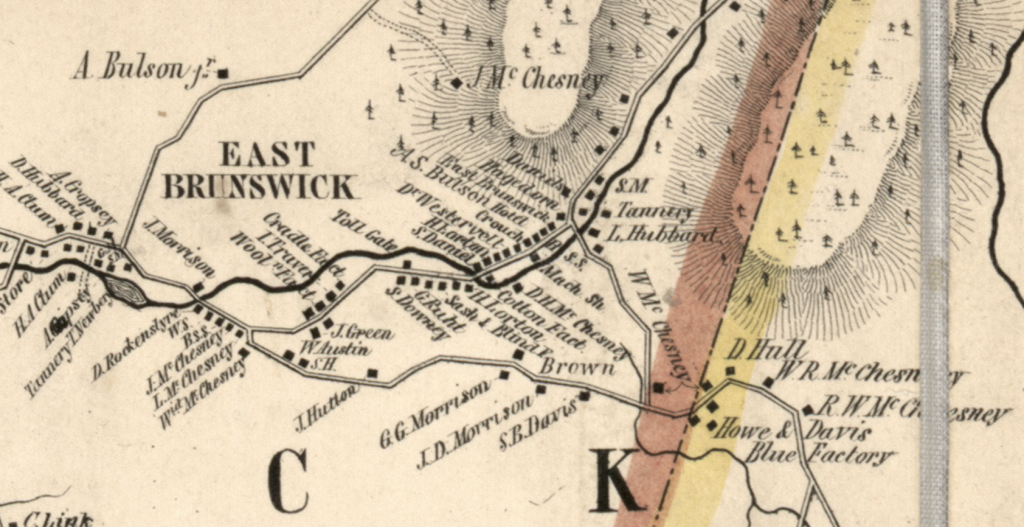 In the non-population schedule for the 1870 census, Aaron is again reported as a maker of Prussian Blue, and his materials include prussate of potash, copperas, allum (?), and potash. He has 6000 units of Prussian Blue, but what those units are is not reported, and it appears to be worth perhaps $5150 (hard to read).

“Aaron Davis, an old and esteemed resident of Cropseyville, died early this morning. The deceased was born in Cropseyville about seventy-five years ago, and had always resided at the old homestead. He was engaged in the manufacture of paint and in farming. A wife and children survive.”

The business was still going strong when Davis died, and in his will he left to son Samuel A. Davis all his real property, all his farm stock, and “also all apparatus used by Aaron Davis & Son in the manufacture of Prusian [sic] Blue.”

Samuel Davis continued the business, along with his son. A 1904 report of the New York State Department of Labor notes, in a section on manufacture of paint, that “one factory in Rensselaer county turned out annually $4,500 worth of Prussian blue,” but doesn’t specify the year. Another report says that the Prussian blue manufactory (which they identify as in Grafton) had $2000 worth of capital, $1000 worth of raw materials and $5000 worth of products. A 1914 story in the Troy Daily Times says that Samuel represented Brunswick on the County Board of Supervisors:

“Mr. Davis has associated with him his son and they manufacture blueing of the variety known as Prussian blue. There is no other establishment of the kind in this section and but few in the country and it may therefore be regarded as one of the many industries peculiar to Rensselaer County. The product of the plant is shipped to New York, where it is handled by a commission house. The blueing is used in the production of patent leather, to which it gives a very high polish. The output of the Davis plant is considered second to none in the market and the blueing is in great demand. A noteworthy feature of the business lies in the fact that it was established more than 100 years ago, but how much longer than a century Supervisor Davis said yesterday he did not know. It was more than 100 years ago that his grandfather came to Grafton from Boston and obtained employment in the establishment with a man named Hoyt. Subsequently it was operated by a Mr. Fielding, then by Mr. Davis’ grandfather, after that by his father and then the business came to him. Accordingly it is a business with a history and one of the oldest manufacturing plants in this section.”

When the blue factory went out of business, we don’t know. But the road named for it remains.

3 thoughts on “The Blue Factory”