We ran across an interesting tome by the title of “Union College Alumni in the Civil War,” and thought we might try to give a little rundown of the alumni of the little Schenectady college, founded in 1795, who had served both the Union and the Confederacy. How much work could that be?

As it turns out, if we tried to even gloss the information in Thomas Fearey’s 1915 book, we’d be at it all week. Union College alumni were all over the Civil War, not just recent graduates or those who finished their studies during or shortly after the term of the war, but even those who had graduated 40 and more years before. That seems remarkable, but of course the Civil War was singular in a number of ways. Has there been another war in which active members of Congress served? 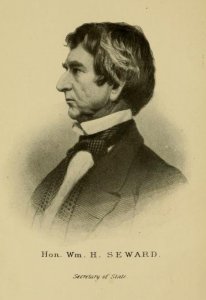 Fearey featured five alumni who “rendered distinguished services to their country during the civil war,” which included:

Only a single faculty member was featured in this listing, Elias Peissner, a native of Munich who served as a professor of German and Political Economy. “At the age of 35 he was mustered in as Lieut. Colonel 119th N.Y. Vols. To serve three years, August 9, 1862. Promoted to Colonel Sept. 1, 1862. Killed in action at Chancellorsville, Va., May 2, 1863. A Grand Army Post in Rochester, N.Y. is named for him.”

The two members of the class of 1813 were both in service of the United States Navy. Samuel Livingston Breese was a lieutenant in comment of the Crusader when the Civil War began; he was promoted to Lieut. Commander July 16, 1862, commanded the Quaker City of the South Atlantic blockading squadron in 1862-3 and the gunboat Ottawa in 1863-4. He remained in the service after the war. John J. Young was a captain in the Navy when the war began, and became a commodore on July 16, 1862.

Robert Toombs, Class of 1828, left the U.S. Senate and led the secession movement in Georgia after Lincoln’s election. “He was one of the Chief organizers of the Confederate Government, and was a prominent candidate for President. He was Secretary of State for a few months and then resigned to become Brigadier General C.S.A. in Lee’s Army. He fought with distinction at Manassas and Sharpsburg, but was too insubordinate to make a successful commander, so in 1864 he resigned and returned to Georgia. He disliked President Davis and opposed his policies. After the war he would not take the oath of allegiance so he was debarred from Congress.”

Henry Wager Halleck, Class of 1837, had served as an officer in the U.S. Engineer Corps from 1839 to 1854. He became Secretary of State in California “and in 1861 offered his services to the Government and was made Major General U.S.A., Aug. 19, 1861. He was Commander in Chief of the Army from July 23, 1862 to March 9, 1864, and continued in the service after the War.” Fearey doesn’t mention that Halleck, who replaced McClellan, was known by the derogatory nickname of “Old Brains.”

James C. Duane, Class of 1844, went to West Point after graduating Union College, and went into the Engineers. He rose to the rank of Major and then became Brevet Lieut. Colonel and Brevet Colonel. “He commanded the Engineer Battalion in the siege of Yorktown, April 12 to May 4, 1862. He built the bridge over the Chickahominy, 2,000 feet long, August 12-14, 1862. He was Chief Engineer of the Army of the Potomac, Sept. 8 to Nov. 5, 1862, during the Maryland Campaign. Chief Engineer of the Department of the South, Nov. 19, 1862, to June 13, 1863, in the attacks on Fort Mcllister, Ga., and in operations against Charleston, S.C., and again Chief Engineer of the Army of the Potomac from July 15, 1863 to June 8, 1865. Brevet Brigadier General U.S.A. from March 13, 1865, for gallant and Meritorious services during the siege of Petersburg and the defeat of Lee . . . He was one of the joint commission to supervise the construction of the Washington National Monument, Oct. 11, 1886-June 30, 1888.”

There is so much more. If you want the rest of the extensive history of those who served, you can find it at the Internet Archive.