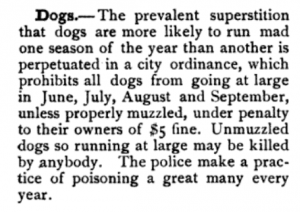 In the Albany Hand-Book of 1884, which contained an alphabetic listing of topics of interest to both residents and strangers, we find this remnant of an earlier time, when an Albany ordinance prohibited all dogs from going at large in June, July, August and September unless properly muzzled, out of the belief that rabies or distemper were more prevalent in that time. “Unmuzzled dogs so running at large may be killed by anybody. The police make a practice of poisoning a great many every year.” Of course, it’s really only during our lifetime that actually being responsible for your own dog and having to keep it on a leash or in your own yard has become a societal norm. When we were growing up, dogs just wandered wherever they pleased.