Munsell’s “Annals of Albany,” in the Notes from the Newspapers section, includes a description of the devastating spring flood of 1833, one of many notable floods in Albany’s history:

May 16. A freshet which began two days previous was not at its greatest height and produced much loss and damage. South Market street was impassable below Hamilton street, and carts and yawls plied their amphibious vocations at the rate of 6d a passenger. The vegetation on the island was wholly destroyed. Besides the damage to property, which was serious beyond recollection, there was also loss of life.

The island at the south part of the city consisting of about 160 acres, was at this time occupied by 11 families, deriving their support from the vegetables raised thereon. The recent flood entirely destroyed the crops, and they sustained a loss of nearly $6000. They were equally unfortunate in the previous year when owing to the prevalence of cholera, they were unable to dispose of the products of their gardens.

Cuyler Reynolds, in his “Albany Chronicles,” describes the 1833 flood as the “Greatest freshet of years: lower Broadway navigated by scows to State st. Damage to 11 farms on Van Rensselaer Is.” Reynolds wrote that the freshet, which began May 14, didn’t subside until May 17. 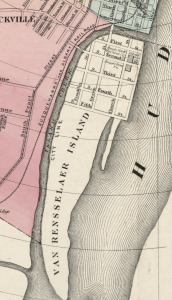 South Market street was what we now know as Broadway, which extended to the southern border of the city at what has variously been known as Castle Island, Martin Gerritse’s Island, Patroon’s Island, Van Rensselaer Island (separate from the other one on the Greenbush side of the river) and Westerlo Island. The island was separated from the city by the flow of the Normanskill. This map from 1874 shows the island separated by Island Creek, but clearly occupied at the time, running from South First to South Fifth street, with extensions of Franklin, Green and Church streets running to the south. At that time, 40 years after the flood Munsell spoke of, there were two iron works (Olcott and Jagger) and a machine company (Eagle M&R).

Jagger Iron Company was headed by Ira Jagger, formed in 1870 as The Corning Iron Company and casting its first iron in 1871, according to Howell’s 1886 “Bi-Centennial History of Albany.” It was a large works employing 140 to 150 men in its heyday, but closed in 1883. The Olcott works was probably what became the Albany City Iron Company, owned by A. Van Vechten, J. Howard King, and Dudley Olcott, which was built in 1873 and employed 160. It, too, was closed when Howell was writing. We don’t find anything about the Eagle M&R Machine Co.

Today the outflow of the Normanskill flows only south, not north, and this former island has been filled in entirely to connect with the mainland, on which the Port of Albany now sits. Before it became the port, it served for a while as Quentin Roosevelt Field, an important early airport.

Freshets were more than a minor problem in the days before the Sacandaga Reservoir was created to tame the Hudson River. In the early days, they were noted often, and of course in 1618 the original Fort Nassau built on Castle Island was wrecked by a freshet and abandoned by the Dutch. Fort Orange was nearly swept away in 1647 “by a freshet of unusual proportions, broadening and deepening the river so that a school of whales (it is said) swam up the Hudson as far as Lansingburgh, one of which becoming stranded on an island opposite that place, gives it the name of Walvish Eylant or Whale Island (a small island in the Hudson River above Troy which disappeared on construction of the state dam).”

In 1818, the water stood over two feet deep in the Eagle Tavern on the southeast corner of South Market (Broadway) and Hamilton, “the ferry carried half way to Pearl street and sailing vessels floated over the dock, one family carried in its house across the river to Bath.” Just the year before the 1833 flood, another freshet, “the most extensive in years,” carried away several buildings on the pier and the basin bridges. In 1851, a freshet in February carried away 200 feet of “the Government embankment extending to the island opposite North Albany from mainland.” In 1854, the pier was submerged by what was marked as the seventh freshet of the spring in April. In 1861, a freshet carried away three bridges leading to the pier, also in February. In 1900, February flooding was called the greatest in 43 years, 20 feet above normal level, “causing great suffering in southern section of city.” On Easter 1906, a day of rain created a four foot freshet in the river, “so that steamboat Morse takes on passengers at Gansevoort street.” It wasn’t until 1930 that the river was tamed and these damaging floods were brought under control.

After posting, we were reminded by Paul Nance that this frequent flooding was the reason the commercial district moved up off Broadway to Pearl Street. He also noted that the cholera outbreak of 1832 was pretty substantial, with 1,147 people afflicted and 422 dying; anyone who could get out of the city that summer did.