It tickles Hoxsie’s cockles that so many beautiful, important, historic buildings in Troy are seeing renovation and reuse. Not least of these is the building constructed by William H. Young, bookseller and stationer, which has stood somewhat neglected on First Street next to the Rice Building for too long. Young’s printing and bookselling business was responsible for both of these buildings. Happily, it looks like this one will be saved.

Young’s business descended a long line. It was begun in 1821 by Ebenezer Platt, who partnered with Daniel Platt and formed the Franklin Bookstore, selling books and stationery and named for a bust of old Benjamin Franklin over its doorway on River Street. The business and the partners moved almost ceaselessly. William Young came on the scene in 1842, working with various partners through the years. In 1864, he built this beautiful brownstone at what was then numbered 8 and 9 First Street, which connected to an existing store-room at 216 River Street. In 1871, he built the glorious corner anchor now known as the Rice Building (or at least the first three storeys of it), where he established a book-bindery and printing office.

Writing in 1876, Arthur James Weise, whose work was being published by William Young, wrote that “His spacious store-rooms contain a large collection of American and foreign publications, Bibles and prayer-books, text-books for colleges and schools, cheap and choice stationery, a full line of gold pens and pencils, and the latest specialties in fancy goods. He also manufactures blank books of all styles, from great bank ledgers to pocket memorandum books.” 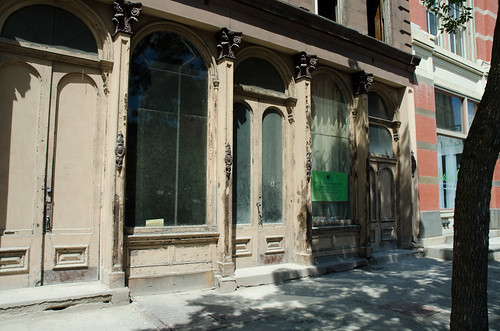 Here’s how it looks today. 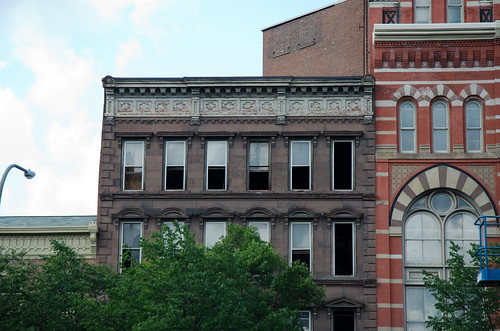