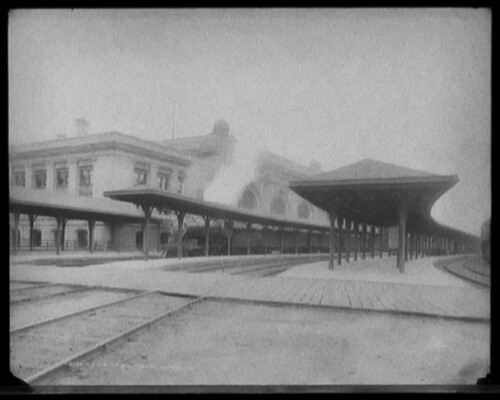 Once upon a time (and until 1968), passenger trains rolled up the east side of the river and crossed the Maiden Lane Bridge to Albany’s Union Station. “Union” referred to the joining of two or more rail lines, in this case the New York Central and the Delaware and Hudson. (The elaborate headquarters of the D&H, which today stands as the headquarters of the State University of New York, was never a rail station.) This trackside view from early in the 20th century would now be obscured by the Columbia Street Parking Garage, but fortunately Union Station still stands. It served as office space for a succession of banks, but it is now awaiting its next use, which may be as a business incubator for the College of Nanoscale Science. Since the demise of Albany’s First Night celebrations, there haven’t been many opportunities for the public to see the magnificent interior of the building. Let’s hope that changes.