We’ve talked before about Tweddle Hall, the center of Albany civic life for what turns out to have been a mere 21 years. Malt merchant John Tweddle built it at the Elm Tree Corner to meet the need for a public hall for lectures, entertainment, and meetings in the booming city, with the building opening late in 1860. Its importance was perhaps immeasurable, but its existence was actually brief, and it burned rather completely on Tuesday, January 16, 1883. The Albany Morning Express told the tale, headlined “In Ashes!”

Since the eventful morning nearly three years ago when the old City Hall was laid in ashes, no event has caused such excitement as the one of yesterday, which has laid bare the walls of one of the oldest places of amusement in Albany, and reduced Tweddle Hall to ashes.

The paper noted that it was extremely fortunate that there was no one in the building at the time; certainly had it happened during a performance of some sort, the cost would have been high.

“It was about twenty minutes to eight o’clock yesterday morning that several men coming down State street saw a boy rushing out of McCammon’s music store, under Tweddle Hall, shouting “fire.” He was hatless and coatless, his hair singed and his face livid with fear. He was quickly surrounded by a small knot of people, and in answer to questions put him pointed inside the store. Fear had made him dumb, and following the direction of his finger, the men stared and saw a bright light in the rear of the warerooms, while dense volumes of smoke rolled through the open doorway. Officer Fahy, who heard the shouts of the boy, ascertaining that a fire was in progress sent in an alarm from box 19.”

The response from Steamer 4 was quick, and the firemen were running a hose from a hydrant on the southwest corner but before the water could start to flow, “the flames shot from the roof over the stage, and it was palpable to all that Tweddle Hall was doomed.” Steamers 1, 2, 3, 5 and 6, and Trucks 1 and 2 arrived, and a general alarm was soon ordered, calling out reserve steamers and firemen,
“but the fire was spreading with astonishing rapidity and within twenty minutes from the time the boy rushed to the sidewalk, shouting the alarm, the whole north end of the roof was a seething mass of fire, and from every window on the gallery floor flames were issuing in sheets. The manner in which the fire spread created consternation even among the firemen. It was so hot that for a block away the assembled multitude were forced to retire; so hot, in fact, was the atmosphere that the heavy plate glass windows of B. Stark’s fancy goods store, and in those of Killip’s and the shoe store adjoining, on the opposite side of North Pearl street, over one hundred feet away, were shattered, as were also seventy-five panes of glass in the Albany Savings Bank building, corner of Chapel and State streets, nearly three hundred feet away.

It looked as if the whole block was going to go. Flames on the west side threatened the residence of Erastus Corning (junior – the railroad tycoon had died in 1872), but firefighters were able to save it. On the north side was “the old Austin mansion,” then occupied by the Women’s Exchange, and next to that the Odd Fellows’ Hall, both of which were thought doomed, but those were preserved as well.

“While all this work was being performed the [other] firemen and citizens were not idle. Telephones and messengers were brought into use and the occupants of the stores were sent for, and the work of removing the goods commenced. The Insurance Patrol covered the greater portion of the goods in North Pearl and State streets, and the damage that resulted to the goods and chattels has been caused alone by water that came pouring down from the floors above; and in consequence of these precautions much is saved the insurance companies.” 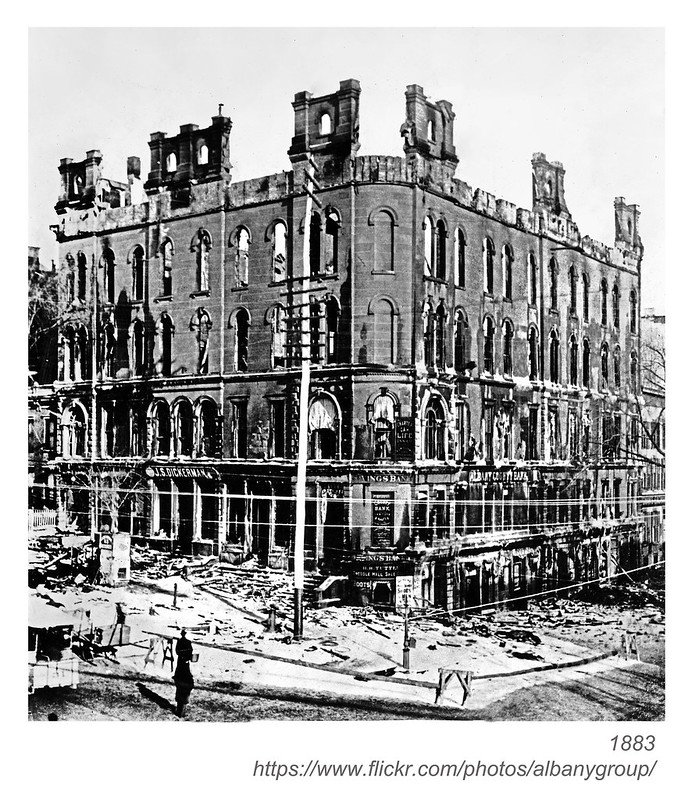 The iron roof of the building collapsed at 8:30, and the fire’s force was spent by 10:30 that morning. “Never before in the history of fires in this city was so much clever work done by a body of men [the firemen] in the face of what at one time appeared most dreaded disaster … Several times they were shouted to by citizens to leave their exposed positions, but orders must be obeyed, and, unheeding the mandates of outsiders, they remained steadfast, and refused to leave until ordered to do so by their superiors. On North Pearl street it was impossible to force the water to the fourth story, and attempts were made to rig ladders, but the network of wires prevented this, and curses loud and deep were uttered both against the Telephone Company and the Water Commissioners.”

The wires were a problem. It appears the fire officials tried to get the telephone companies to do something about the tangle of wires that blocked their access – though what they could do in short order isn’t made clear. What Chief McQuade did was ultimately as effective as anything that could have been done: he ordered his men to chop down the “mammoth pole, bearing forty wires,” and ladders could be brought in.

The cause of the fire was not known; rumors of arson were flowing. The boy who discovered the fire worked for Edward McCammon in his music store. On opening the store, as he was preparing to start the stove he smelled smoke and went to the rear of the store to investigate. Then he heard cracking of glass, and the transom over the rear door burst with heat and flames; he found the back hall ablaze. Apparently not having been taught not to open doors where there may be fires, he found it hard to shut, and then ran out the front.

The losses were estimated at about $100,000, and the Express went so far as to list all of the insurance companies involved and their coverages. In doing so, we got a look at some of the tenants in the building, which included the Albany County Bank, the aforementioned McCammon’s music store, William Buckley’s art store, the law officers of J.W. Mattice and Edward W. Ronan, an insurance agent named Williams, H.B. Tuttle’s shoe store, Louis Sautter’s drug store, James Maher’s crockery store, John F. Conor’s tailor shop, and several others.

The Express took the opportunity of its destruction to give us some great details on the history of Tweddle Hall and the buildings that preceded it on what has long been Albany’s most important corner. It’s too good to edit down:

The site of the hall up to 1793 was occupied by a frame tavern known as the Blue Bell and afterwards by Charles R. and George Webster as a book store and printing office. The property being acquired by John Tweddle, then President of the Merchant’s Bank, the old structures were demolished, the work beginning Thursday, May 5, 1859, preparatory to erecting the well-known edifice called Tweddle Hall. The architect was H.N. [Horatio Nelson] White, of Syracuse, but the work was done by Albanians; Robert Aspinwall, mason; John Kennedy, carpenter; William Gray, stonecutter. The dimensions of the building, which was of Connecticut free stone, were 88 feet on State street and 116 on Pearl street. The total cost of the edifice and lot was $100,000. The lower stories were devoted to stores and offices, but over all was the large hall 100 by 75 feet, comfortably seated over 1,000 people. Two or three years ago the hall was converted into a theatre, its stage apparatus being one of the best and most expensive in the country, while the scenery was the work of the best artists, costing many thousands of dollars. At the time of the destruction it was owned by Mrs. Pulling, of New York, and Miss Tweddle, of this city, T.W. Tillinghast being the trustee.

Tweddle Hall was opened to the public on the evening of June 28, 1860, with a farewell complimentary concert to George William Warren, in which Mr. and Mrs. Henri Drayton and local talent took part. Mr. William D. Morange, of this city, read the dedicatory address, full of wit, humor, reminiscence and poetry, written by himself. Since that day the history of the hall has been a notable one. Within its walls have been delivered lectures, readings, concerts, minstrel shows, balls and meetings. Numbers of the most distinguished dramatic artists of the world have appeared here, and the hall had a reputation among singers and actors second to no other place of entertainment in the land. The first dramatic entertainment given in the hall was Dec. 25, 1861, under the management of John T. Raymond, who brought out Edward Eddy for one night. September 14, 1863, Edwin Booth made his first appearance in Albany at Tweddle Hall, opening in Hamlet, and playing Richelieu, Othello, Sir Edward Mortimer and Petruchio and Shylock. Although the Academy of Music was opened Dec. 22, 1863, dramatic representations continued to be given at the hall. February 29, 1864, James H. Hackett began a short engagement as Falstaff. This was the last appearance in Albany of the great comedian. November 16, 1866, Maggie Mitchell played Fanchion and Little Barefoot, as we think for the first time in Albany. March 14, 1867, Parepa Rosa appeared in concert with Carl Rosa, J.R. Thomas and S.R. Mills, for the benefit of the fire department. January 8, 1870, she appeared for the first time in Albany in opera, in “The Marriage of Figaro.” April 20, 1867, Ristori played Mary Stuart, and December 27, of the same year, Elizabeth. March 18 and 19, 1868, Charles Dickens read the Christmas Carol and Trial from Pickwick, Dr. Marigold and Bob Sawyer’s party. April 14, 1869, Clara Louise Kellogg appeared in concert. Edwin Forrest appearing as Richelieu October 27th of that year. In the summer of 1872 the hall was transformed into “an opera house,” that is, orchestra chairs were put in, the seats behind them were elevated in tiers, and the stage was enlarged and beautified with scenery, curtain and private boxes. The exists were also much improved. It was opened November 12th, with readings by Mrs. Scott-Siddons, and has since received its share of patronage. Here hundreds of people have listened to Salvini. During the present holidays St. Peter’s hospital fair was held there, and on Tuesday night, January 9th, the Ancient Hibernians held their ball. The hall was engaged for readings for Thursday night next.