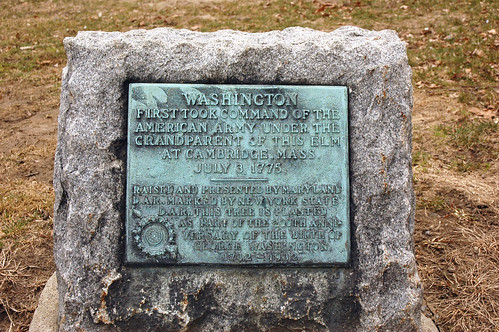 Once upon a time, there was an elm tree in Albany’s Lafayette Park (just across from the Capitol). That tree’s grandparent (whatever that may mean) was a leafy witness to history.

“Washington first took command of the American Army under the grandparent of this elm at Cambridge, Mass. July 3, 1775

Raised
and presented by Maryland D.A.R. Marked by New York State D.A.R. This
tree is planted as part of the 200th anniversary of the birth of George
Washington 1732-1932.”

The tree, sadly, is no longer there, no doubt felled by Dutch elm disease, which did almost as much to change the look of our cities as urban renewal did.

2 thoughts on “Washington under the elms”