The first time I became aware of Wells & Coverly, a pretty high-end gentlemen’s clothing store, was when I moved to Syracuse in the late ’70s, where I believe they had a store in Shoppingtown Mall and may have still had their South Salina Street location. It was a top name for quality and service, and pops up in a number of Syracuse-related searches; people were proud of their Wells & Coverly clothes and their Nettleton shoes. So I was surprised to find that in fact, Wells & Coverly was from Troy.

Weise’s “Troy’s One Hundred Years, 1789-1889” says that in 1890,  Frederick Wells and James Coverly, took over the men’s and boys’ clothing business of Morris Gross at 336-338 River Street and 13-17 Fourth Street in Troy. (Curiously, there was also a Boston hardware concern some years earlier by the name of Wells, Coverly & Co. It was around in the 1850s, and other variations including the Coverly name continued through 1864, when it became Frye, Phipps & Co. I can’t find the connection between the hardware and the clothes.) In 1907 they added to their location in Troy, had a location in Hoosick Falls, two stores in Oswego, and opened their Syracuse store in the Betts Block on South Salina Street (it still stands).

With the renovations, their store in Troy had 80 feet of frontage on both River and Front streets. “The showcase equipment of the store commands admiration. Another innovation is the most modern type of the electric cash carrier system with six stations. The electric lighting is provided for by an entirely new plant formed by Nernst lamps. Large mirrors on all sides enable customers to get a full view of their new suits from head to foot. Toilet rooms are also among the conveniences provided for patrons. The room set aside for children is a very handsome apartment. The doors and drawers of the cabinets and cases require no more than the touch of a little finger to move them.”

I suspect its location was probably where the Uncle Sam Atrium parking garage is today, directly across from Frear’s Cash Bazaar; I’d love to hear from someone who knows.

Thanks to a posting over at the Nostalgic Syracuse Facebook page, we were twigged to another piece of the Massachusetts connection. George B. Dowley, who began with a clothing store in Hyde Park, went to Worcester, Mass., and bought out the venerable Ware-Pratt Company, Worcester’s oldest and largest clothing store. According to the “History of Worcester and Its People,” Dowley “bought the Wells-Coverly company and incorporated the business, April 1, 1914. This company operates stores in Troy, Syracuse, and Oswego, New York. George B. Dowley is the president of this corporation and his son is treasurer. Mr. Dowley added to his strong of clothing stores by purchase, May 2, 1918, another place in Springfield, Massachusetts, which will be run by the Ware-Pratt Company of Springfield.”

Of interest, here in 2015, we happened across an antiques shop in New Hope, PA, that had a number of printing related items, and among some cast-off lead type cuts was this logotype for Wells & Coverly: 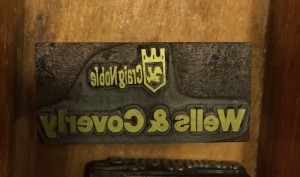