Someone recently responded to an old article we wrote about all the pianos that were once manufactured in Albany. While the Boardman & Gray pianos are probably the best known of the Albany manufactured instruments, they were asking about pianos by John and Horace Meacham, who started it all around 1829. Pianos had just achieved their modern form, using a full iron frame, and were booming in well-off households. 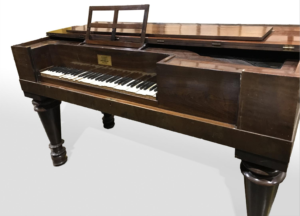 We haven’t found a huge amount of detail about John and Horace Meacham. The Metropolitan Museum of Art holds a bassoon that it credits to John Meacham from about 1811, and says he was born in Enfield, Connecticut, in 1785. The Met says that “John Meacham was one of the earliest musical instrument makers native to the United States, having been born in Enfield, Connecticut, in 1785. He began manufacturing instruments in about 1810 in Albany, New York. His brother Horace, born about 1787, joined him in 1813. Horace had a son, Roswell, who was born in Connecticut about 1810. The Meachams also sold hardware and military goods. The company became Meacham and Pond in 1828 when the brothers partnered with Sylvanus Pond.”

The earliest local newspaper article we can find mentioning the Meacham brothers is from May 1822, an advertisement in the Argus for the Military & Music Store of J. & H. Meacham at No. 34 State street.

“Are receiving daily supplies of Military Goods consisting of all pattern and quality SABRES, Plated, Gilt and Steel Scabbards, or all descriptions; Plain and embroidered EPAULETTES, WINGS, and CORDONS; Lace, Cord and Tassels, and all kinds of Military Trimmings; BUTTONS, in great variety; PISTOLS, Muskets, Rifles, Fur and Leather Caps, and elegant Silk Standards.

“Common and Patent six keyed BUGLES, Double Bass Drums, with the Bust of Washington in the center, and all other kinds of Drums; Plain, Eagle and Ornamental Painting, and all instruments for Martial and Bands of Music; all of which are warranted, and will be sold for cash or approved credit, at the New-York prices.

(The “organized piano forte” appears to have been an invention of Sebastian Erard, originally of Strasburg and then of Paris, and it was fitted with two keyboards, one for the piano and one for an organ.) 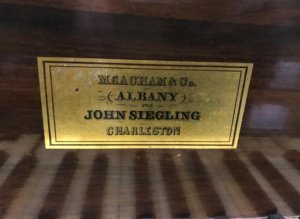 There are several indications that when the Meachams decided to get into piano making, they brought in John Osborne (sometimes spelled Osborn) of Boston. Alfred Dolge’s “Pianos and their Makers” of 1911 says that in 1830-1840, “a coterie of piano makers lived at Albany, whose influence upon the piano industry of America has been of a lasting character.” He says that Osborne came from Boston in 1829, and made pianos for Meacham & Company. Osborne had been an established piano maker in Boston since 1791 or so, and may have opened an operation in New York City at the same time as in Albany. Osborne was described as “nervously progressive,” and his instruments varied rather widely in design and construction. His Boston pianos include the earliest known upright pianos made in America. Howell’s “Bi-Centennial History of Albany,” a source notorious for being adjacent to the facts, says that “It is probable that the first person to manufacture pianos in the City of Albany was John Osborn, an Englishman, about the year 1825, who continued for a short time on his own account, and then became associated with J. & H. Meacham, who was manufacturing other musical instruments, and had a music store at State street.”  Now it may be that Osborne was in Albany that early, but it appears he continued in Boston until 1829. An ad from Meacham and Pond of 1831 offers pianos made by “Messrs. Osborne & King”:

“Premium Piano Fortes – Meacham & Pond offer for sale Premium Piano Fortes, from the manufactory of Messrs. Osborne  & King, of this city, to whom the Trustees of the American Institute have, on the 14th inst. awarded a premium, as being the best makers.  These instruments are all of superior tone and workmanship, of various patterns, both elegant and plain, and well worthy the attention of those wishing to purchase.”

The Meachams had their hands in any number of business ventures. In a single edition of the Argus in 1827, they were selling: R. Hemming & Son’s Royal Improved cast steel silver eyed needles, by the case or thousand; Plated and Silver Ornaments, for saddlers, in great variety, together with a general assortment of Saddle and Harness trimmings; Molasses Gates, a new article just received and for sale (and we have no idea what they were); plated ware – 2 cases cut glass table castors, 1 cask silver mounted candlesticks, and 1 case of fowling guns; Scythes –50 dozen cast steel grass scythes, warranted; 20 dozen cast steel cradle scythes; 200 dozen cast steel sickles; 250 dozen Smithfield scythe stones; a constant supply of Rogers’ Orange Gun Powder, in quarter casks and canisters; gauge and wantage rods, board rules, &c.; patent balances to weigh from 8 to 16 cwt. All of those were advertised separately, all for sale from their location at 391 South Market Street, now known as Broadway.

The Meachams also took on a partner,  Sylvanus Billings Pond, who was born in Milford, VT in 1792, and married an Albany girl, Elizabeth Mayell, in 1823. Once source says he was a piano maker in Albany by 1820; he later moved to New York City, in 1832, joined the Firth and Hall, which later, as Firth, Pond & Co., was the principal publisher of Stephen Foster songs., Baker’s Biographical Dictionary of Musicians says that he was a partner in the publishing house of Meacham and Pond from 1820. The American Booksellers Guide of 1869 says that Meacham and Pond were among the three earliest music sellers of whom they could find any trace. In 1831, Meacham and Pond advertised that they would accept second hand piano fortes “in exchange for new instruments, at a reasonable valuation.”

But Meacham and Pond was clearly more than just piano sales and music publishing. They were advertising “50 fine fowling guns” and extensive military supplies: brass plates and feathers, brass and iron mounted muskets, cut and smooth military rifles, and “200 water proof military leather caps, with all kinds of trimming for the same.”

The business wasn’t always smooth and booming, apparently. In 1832, John and Horace Meacham assigned to one Welcome Esleeck, “for the benefit of their creditors … all their goods, wares and merchandizes, together with all debts owing to said firm. All persons indebted to the said firm will make payment immediately to [Esleeck]. The goods are for sale at reduced prices for cash, at the store lately occupied by the said J. and H. Meacham & Co. at the corner of South Market and Beaver streets, Albany.” We don’t know much about Welcome Esleeck, except that a book by William MacKenzie quotes a letter from 1823 regarding Presidential Electors and doesn’t paint a pretty picture:

“A meeting has been called, and is now, this moment, in full operation, in relation to the Presidential Electors. It was started by two notorious political renegadoes [sic], to wit, W. Esleeck and Jacob Lansing – men who, despairing of becoming great by any other means than through the medium of such meetings, and who have become misanthropes because the world and its people will not acknowledge their superiority and greatness.”

In 1833, in chancery court, Henry Delavan brought a judgment against  “John Meacham and Martha his wife, Horace Meacham and Sarah his wife, Welcome Esleeck,” and several others, including the President, Directors and Company of the Canal Bank of Albany. In the judgment, the court master was to auction, on April 5, 1833, “all that certain lot of ground with the ware house thereon, situate and being at the corner of South Market (late Court) and Beaver Streets,” which was apparently adjacent to a “shop or building belonging to the said Henry W. Delavan.”

Perhaps it was the 1832/33 collapse that led to organizing the business as R.S. Meacham, led by Horace’s son Roswell but clearly the same business. By 1833, R.S. Meacham was advertising pianos and music as well, from an address of 84 State street:

“On hand, several First Premium Piano Fortes, (the best made in the factory) which will be sold at the New York wholesale prices.

“Also on hand, a fresh supply of PIANO MUSIC.

In a separate ad, R.S. announced that at his Military and Music Store –

“The subscriber will continue to prosecute the military and music business [sic], at 84 State st. in all its various branches. Military companies equipped with every article wanted. Bands of music furnished with every instrument necessary in making up full bands. Piano fortes brought to great perfection. Some beautiful specimens now on hand, – the name of Meacham & Co. will be stamped on the instruments. Several apprentices wanted.”

An ad from 1839, also signed by R.S. Meacham, refers to “Messrs. Meachams,” indicating they were all likely still in business together.

In 1842, John Meacham was declared bankrupt. Horace Meacham was separately declared bankrupt in 1843. We find nothing more about the firm after that.  It appears that he lived until Dec. 8, 1844, dying at 59, and that Horace lived until 1861. Meacham rated a mention in Munsell’s Annals, but not much more. It’s rather surprising that what was clearly a pioneering company got so little attention at the time, and we don’t know exactly when the company stopped making pianos. In 1860, Horace was still listed in the census as a piano forte maker, but he would only live another year.