We were covering some of the ten original historical markers that were initially put up in Glenville through the efforts of its original historian, Percy Van Epps, in 1935. One was for Van Patten’s hotel, also known as “Upper Nickey’s.” The marker read:

Built and Kept by Nicholas

When Van Epps was writing, Van Patten’s house was still standing, a “fine old house of colonial design, today the home of the family of the late Claude C. Runner.” As a hotel, it became known as “Upper Nickey’s” in comparison to “Lower Nickey’s,” a hotel that was just above the Beukendaal and kept by another Nicholas Van Patten, a cousin.

Van Epps wrote that from 1790 to 1820, Upper Nickey’s was “a well-known and favorite stopping place for the numerous teamsters hauling produce from Galway and the North; and it was in Van Patten’s house that in 1821 Glenville’s first town meeting was held. As the population of the newly-formed town stood, Van Patten’s house was practically its center. Scotia at that time – and for the next half-century – had no more inhabitants than the Village of Glenville – perhaps not so many.”

Shortly after that meeting, “a new proprietor took charge of the old Van Patten hotel, as we learn from a sign-board yet stored in its attic. On this can be traced, under a later-painted name, that of B. Crippen. Evidently proud of the name given his town Crippen caused it to be painted on his sign-board. Painted over the readily-traced name of Crippen is ‘D. Wessels, HALF-WAY HOUSE, 1843.'” That would have been David Wessels, a later proprietor.

“Finally, with changed conditions, the building of the railroads, the passing of the charcoal and tan-bark industry, and the near end of the lumber supply from the North, the inns – save one – along the Sacandaga Road, and there was at least five in the limits of the town, closed their doors to the public. Among these was the Van Patten house, which now became the home of the Ward family, descendants of Amos Ward one of the early settlers of the neighborhood. At least four successive generations of the Ward family lived in this house.”

We were confused and a little disappointed as we looked for an image of this marker. We had never taken one. The Van Epps book has a fair reproduction of it, but we thought there had to be better somewhere. Google and Flickr seemed to let us down. In searching the Historical Marker Database, we found a photograph by a reliable source for such things, Howard Ohlhous. The marker he provided a photograph of isn’t the marker we’re looking for – it appears to be a replacement, and, sadly, not a replica. In place of Van Epps’s text, it reads:

Site of a Tavern

No date for this replacement marker, which sadly skips over the designation of “Upper Nickey’s,” is given. It stands at the corner of Sacandaga Road and Ridge Road. We were confused about why anyone would change the text, which was well-documented. More importantly, while we know that memory is fallible, that’s not where we remember the marker having been. And Van Epps put it four miles above the Beukendaal – a lot further out than Ridge Road is.

A 1976 article in the Scotia-Glenville Journal indicated that the old house was still standing (and that the Half-Way House sign mentioned by Van Epps was donated to the Schenectady County Historical Society). Gladys Runner was still alive and talking about the history of the house. “When Mr. and Mrs. Claude Runner bought the house in 1926, Mrs. Runner remembers that there was a pitcher pump and an iron sink in the kitchen. Also, to show the changes which have taken place in only 50 years, this house was only the second house from the church on the corner of Bolt Road. Now Sacandaga Road is lined with many houses. The kitchen had been added by the Ward family to the rear of the house. The house is constructed from great solid hand hewn beams which have been exposed when the ceiling plaster was removed in several rooms. The walls of the lower floor are thick solid brick – the walls of the second floor, of lumber, covered with clapboards; later the whole outside of the house was covered with asbestos shingles. Many of the original doors and doorframes can still be seen.  The large ballroom upstairs has been turned into three bedrooms. One fireplace has been blocked off, the other rebuilt to another style. A number of other changes have been made as happens when families move in to adapt the house to the ‘latest’ style, ‘modernize,’ or to make it more ‘practical.’ Many Scotia and Glenville residents are acquainted with Mrs. Runner, the little white-haired lady who comes to the church fairs and firemen’s open house days with her beloved ponies for the children’s delight. Besides her love of her family of ponies, she has a great love for her house and its history. The old hotel is now known as Valleyview farms.” The article lamented that the location of the first town meeting was important in the development of Glenville, “and should at least have the state historic marker, plowed down during a snowstorm, restored. Perhaps a way will be found to replace that marker so people will remember as they pass by.” 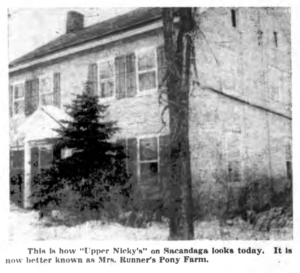 Another, earlier Journal article from 1963 hints at why the text may have changed.  It indicated that there had been confusion between Upper Nicky’s and Lower Nicky’s, and quotes then-town historian Donald Keefer as explaining that Upper Nicky’s, run by Nicholas Philip Van Patten (1774-1832) was (as noted above) Mrs. Runner’s house “(the Pony farm).” Lower Nicky’s, run by Nicholas Simon Van Patten (1796-1863), opened as early as 1820, was located “just above Hardin’s Crossing on the Sacandaga Rd. The original tavern burned in 1834 and was immediately rebuilt about one hundred feet south of the original site (not far from the present Van Patten’s (recently sold) gasoline station on the corner of Ridge Rd.) Lower Nicky’s tavern and a portion of the Van Patten estate was sold in 1938. Shortly afterward the old inn was demolished.”

So, the replacement marker is, in fact, near the site of Lower Nicky’s – could be why it’s not where we thought it was. But, why? Well, Mr. Keefer gave us a likely explanation:

“There is reason to believe that it was in the original old Lower Nicky’s inn that the first town meeting of Glenville was held on the ‘first Teausday [sic] in January in the year one thousand eight hundred and twenty one’ and not at Upper Nicky’s as described by Mr. Van Epps and marked by the state historical marker. This location was nearer the centre of the town than Upper Nick’s which is several miles further north. However former Schenectady historian, Mr. Conde, and others have written categorically that the town meeting took place at Upper Nicky’s.”

Mrs. Runner’s pony farm was called various things in various articles through the years, but a plurality of articles settle on calling it Vallevue. Hoxsie has some memory of signs for the Vallevue farm, but can’t quite place its location – so if anyone knows where it was, and whether the old Van Patten house still stands, it’ll be much appreciated. Maybe it wasn’t the site of the first town meeting (it does seem too far out on the road), but it still deserves to have been remembered for being Upper Nicky’s.

By the way, Mrs. Runner ran the pony farm for at least 43 years, and was still the leader of the Mustangers 4-H club in her eighties. She died in August 1979, at age 88. Eight years before, when she was down to 15 ponies because she couldn’t take care of more any more, she said, “I don’t smoke. I don’t drink, and I don’t run around. My ponies are my dissipation.”