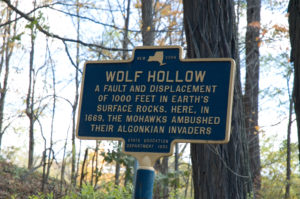 Another of the historical markers placed in Glenville in 1935 through the efforts of Percy Van Epps, town and county historian for something like 25 years. This one was for Wolf Hollow, “A rent and displacement of 1,000 feet in earth’s surface rocks. Here in 1669 the Mohawks ambushed their Algonquin invaders.”

As we noted last time, Van Epps was an avid geologist and a speleologist, so the shale of Wolf Hollow had to have been of interest. Growing up in the area, there was always talk of caves, but it seems the “cave” was an attempt – entirely misguided – to mine coal from the area. And from a local historical point of view, there was the battle between Mohawks and Algonquins, at a time when Europeans hadn’t really gotten this far west; Schenectady was only chartered in 1661.

Here’s what Van Epps wrote about it in his papers:

“Leaving the Mohawk Turnpike at Hoffmans and continuing northward beyond the site of the old Church of the Woestina … the road crosses a stretch of gravelly soil; a delta-shaped fill of a pre-existing lateral valley – material brought down the main valley by the waters of the Iro-Mohawk of the geologists, that mighty torrent that served during the waning of the ice sheet  as an outlet of the great interior lake system while yet its normal outlet, the valley of the St. Lawrence, was blocked with ice.

“To the left of this delta is the wooded eastern flank of the Kinaquariones. To the right and straight ahead rises the long slope of the Glenville hills gashed and gullied with several small water-courses. Shortly the road approaches the actual base of the hill, and here it turns sharply to the left – the entrance of the Wolf Hollow, a great and deep gash dividing the hill, and here we find a marker bearing this inscription:

A RENT AND DISPLACEMENT

He goes on about the interesting geology of the Hoffmans Ferry Fault, and the “dark opening in the black shale. This is the entrance of the ‘Coal Mine,’ locally so-called; a tunnel said to extend for several hundred feet under the high and steep bank of the hollow. This excavation was made about 1856-57 by Dr. Abram K. Underhill. A futile search for coal, which he hoped to find in the slaty rock layers where here are black and slightly carboniferous.” Local pranksters gave him encouragement by planting actual coal here and there in the mine.  When Underhill gave up (and it was Samuel Hubbard who did the actual work), he left behind a substantial lead pipe used to drain the mine, which Van Epps said was used very often by locals who needed lead for making bullets.

About the battle between Mohawks and Algonquins (pick your spelling), Van Epps doesn’t actually say much, and of course being from oral tradition, what we know is limited. Van Epps says it was a battle between (unnumbered) Mohawks, the eastern door of the Iroquois longhouse, and seven hundred “allied Algonkian warriors from Massachusetts Bay, which took place in August, 1669, in the vale of the brook Chaughtanoonda at the Kinaquariones…”

“And it was along this path through the Wolf Hollow that in August, 1669, seven hundred and odd warriors of the allied Algonkian nations from the vicinity of Massachusetts Bay marched in single file, planning a surprise attack on the stockaded Mohawk village of Gandawague, situated on the Sand Flats just west of Fonda. We may well believe that each and every one of the seven hundred painted Algonkian braves, as well as the twenty-four foolish women, who it is recorded accompanied them, stopped to drink at the cool, flowing spring beside their path, and indeed, they may have encamped for the night near this spring. And, too, it was here at the bend in the road, as it passes an outcrop of jagged rocks, that on their hasty retreat, following the futile attack and siege of the Mohawk town, they were ambushed by the wily Mohawks who, under the leadership of their great chief, Kryn, had divided their forces in pursuit, one part blocking the river end of the trail while the other group hurriedly scrambled over the wooded bulk of the Kinaquariones, coming down into the Wolf Hollow almost exactly at Johnnys Spring, where, concealed in the bordering rocky woods, they awaited the coming of the decimated and discouraged Algonkian army. The ambush in the Wolf Hollow and the subsequent battle in which the Algonkin are said to have lost fifty of their principal chiefs, as well as Chikataubet, the great sachem of Massachusetts, was minutely and vividly described by Father Pierron, a Jesuit missionary who was stationed with the Mohawks at Gandawaga, at that time.”

Knowing Wolf Hollow, it’s not a place where we’d like to be caught in an ambush.  Wolf Hollow Road was closed after Devastating Mess Irene in 2011, so if you want to see it, you’ve got to hike or bike it.