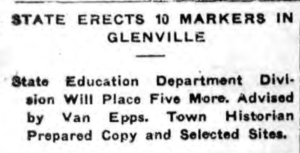 Over on our Instagram account for signs and markers (called, with blinding directness, @signsandmarkers), we’ve been featuring a number of the historical markers that we grew up around. While anyone who grew up in Scotia, Glenville and Schenectady might think these historic markers are scattered just everywhere, that turns out not to be true – but we grew up in a place particular rich in history, and particularly rich in people who were interested in and advocated for that history. Percy Van Epps was one of those people.

Percy M. Van Epps was the first Glenville town historian – and as a young history nerd who loved very little more than combing through the local history vertical files at the Scotia Public Library, itself an historic site, Van Epps was something of a hero. His name was on everything, and his papers, loose in documentation though they may be, provide the most complete picture we can get of life in Glenville at the time that my ancestors seem to have suddenly appeared there.

What we know of him personally comes from another long-time town historian, Donald Keefer, who wrote about Van Epps in the Scotia-Glenville Journal in 1966. The article was later reprinted in “The Van Epps Papers,” issued under another important town historian and mother of a friend, Joan Szablewski.

According to Keefer, Van Epps was born in Germantown in Columbia on August 30, 1859, to a family that was already established in West Glenville; he was brought home at two weeks and lived the rest of his life in Glenville – and it was a nice long one, as he reached the age of 92, passing away in 1951. Keefer writes: “He was a man who controlled his own destiny with vigor and intelligence. Self educated, he excelled in many fields: geography, archeology, history, music, geology and, in his spare time, agriculture. Percy numbered among his close friends many of the leading scientists, scholars and authors of the day. His many publications of the fields of archeology, local history and folklore form a large part of the recorded history of our vicinity. He had an interesting mind; quick, accurate, and filed with amazing and delightful stories. Yet for all his knowledge, this fine old Glenville scholar was a man who at all times was modest and unassuming. His humor was whimsical. It had no slap-stick air about it because it was real humor.”

He was an avid geologist, and a speleologist who must have loved exploring the caves in the area that Hoxsie, having a sensible fear, will never see. His first scholarly writing was published in 1894, and he co-founded the Epps-Hartley chapter of the New York State Archeological Association. He also played in numerous bands and taught music. He was appointed as the Town of Glenville’s first historian in 1926, and three years later became Schenectady county historian; he held both those posts until his death. He was also an avid hiker who “walked over the countryside with a slow and measured stride and with the confidence of a man who knew it inside out.”

“The fellows knew his love for natural history and archeology and one of them kidded him about riding down the street in a buggy with the head of the Smithsonian Institution. ‘That,’ answered Percy, ‘wasn’t the head of the institute. That was Grover himself, and as we drove along, Grover said to me, ‘Perc, when I get through with this business and all my postmasters are appointed, I want you to meet me and give me lessons on the saxophone!’”

The reason Van Epps came to mind this week was that we were posting a number of Glenville markers over on Instagram, and in trying to dig up some more story on them, we found out that Percy Van Epps was directly responsible for them.

“State Erects 10 Markers in Glenville,” screamed the headline in the St. Johnsville Enterprise and News on November 13, 1935. Well, if 10 point semi-bold is screaming. But still. Must have been a slow news day over in St. Johnsville, and grateful we are. “State Education Department Division Will Place Five More. Advised by Van Epps. Town Historian Prepared Copy and Selected Sites,” the subhead reads.

“Ten historical markers were erected last week Wednesday in the town of Glenville by the division of archives and history of the state education department. There are five more to be erected. The division was advised in placing the markers by Percy M. Van Epps, town historian of Glenville, who prepared the copy for them and selected the sites. The markers were furnished by the education department and placed by workmen from the department of canals.”

So, let’s look at  the first of  those ten markers, and do some more in the coming days.

“One on the Mohawk turnpike near Rectors indicating the site of the old time brick blockhouse of Teunis Swart. It bears the inscription: ‘Tinker Hill. Site of blockhouse near river bank, built by Captain Teunis Swart, Stockaded and armed with field piece during the Revolution.”

Van Epps’s papers tell us that no one really knows why it was called Tinker Hill, as there was no record of a tinker living near the place, “neither is there a hill or elevation anywhere near.” Van Epps says that Teunis Swart moved from Schoharie “some little time” before the Revolution – a not uncommon reaction to the very real dangers of living on that frontier and flashpoint was to move somewhat closer to protection.  His brick house at Tinker Hill became known as Swart’s Fort, as it had a barrier of palisades and a small cannon. “Possibly its walls were pierced in places for rifle fire and its windows heavily shuttered and likewise pierced. Prudent precautions these, though happily none of the many raiding parties led by Johnson, Brant, and Butler, that terrorized Schoharie, Cherry Valley and the middle Mohawk region, ever ventured as far down the valley as Tinker Hill.” If you want an idea of what a similar fortified homestead might have looked like, look no further than Crailo in Rensselaer.

From June 1778, Swart was a lieutenant in Captain Van Patten’s company, and participated in all the principal expeditions in the Mohawk Valley. The gun he had mounted in the blockhouse became something of a legendary object in the town: “for years it was a friendly bone of contention between different groups of mischievous and fun-loving boys – and men; not only in Glenville but also in the neighboring villages of Charlton. First held for a time by one village group and then by another; captured and hidden – once underwater in the Dawson millpond – only to have its hiding-place ferreted out by a rival group, who often announced their triumph by firing the old piece. Finally this old stump of a gun – its muzzle had been blown off years before – sounded its last report; a true alarm this time, for not only did it alarm and rouse the villagers of Glenville, but also nearly wrecked their village. Given a heavy charge of powder and solidly tamped the whole length of its bore, it burst with a thunderous report, sending jagged pieces of metal through the walls of more than one house and raining fragments of cast iron on the roofs of others. A scar on a large elm tree yet standing bears witness of this bombardment.”

We’ll have more Glenville historical markers in the coming days.

This is one of the few markers we don’t seem to have a photograph of, so we relied on Matthew Bradley’s photo from Flickr.