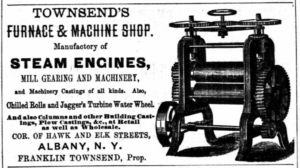 Albany was once one heck of a foundry town. It’s well known that Albany and Troy were both prodigious producers of stoves of all types, and the old heating and cook stoves made in their foundries can be found all over the country to this day. But many other iron products came out of the furnaces. An article from the Iron Molders’ Journal, way back in 1902, gives us some of the background for one of the longest-lasting of those – The Townsend Furnace.

“Among the oldest of Albany’s industries is the Townsend Furnace and Machine shop, the enterprise having been founded as long ago as 1807 by Messrs. Isaiah & John Townsend, two of the leading business pioneers of this city. At that date there was probably no other foundry north of the Highlands. It has continued in operation under the same name and under the guidance of different generations of the family until about four years ago, when a stock company was organized, consisting of Franklin Townsend, Ledyard Cogswell, Ezra Laughren and John T. Brady. The business still preserves the time-honored name – The Townsend Furnace & Machine Co.

“Every department of the plant is thoroughly equipped with all the modern machinery and appliances required in the foundry and machine business. It has castings of every description, steam engines and paper-making machinery. As an item of general interest it might be stated that Jethro Wood, the inventor of the cast iron plough share, had his first ploughs made in this foundry.”

You might say the Townsends had iron in the blood. Both Isaiah and John were born at Sterling, New York, sometimes called Stirling and sometimes called Sterling Iron Works; Isaiah in 1777 and John in 1783. There are several versions of when the brothers came to Albany. It looks like Isaiah came first, possibly in 1799, and became a partner in the Stewart foundry. It soon lost the Stewart name. John moved here in 1802, or 1807, or 1799, or possibly some other date, to join him, and took over the business on Isaiah’s death in 1838.

The Syracuse Herald said in a 1900 article on non-resident property owners that Isaiah first went to Albany in 1799 as a partner in the firm of Stewart-Townsend, and “soon after engaged in the iron business alone. John Townsend came to Albany in 1802, and in 1804, the firm of I.&J. Townsend was formed and continued until the death of Isaiah in the spring of 1838.”

Like many of the early industrialists, John was also a politician, who served as mayor in 1829, 1830, and 1832. Townsend Park, the intersection of Washington and Central avenues, was named for him in 1833, at least partly in honor of his efforts in dealing with a cholera outbreak in 1832. It may also have been in honor of his personal losses, for a Syracuse Herald article from 1900 reported that he and wife Abby Spencer had thirteen children who “blessed their union, and of these four died of cholera during the scourge.” (The park had originally been slated to be named in honor of George Washington, and thus Washington Park would have been a much smaller affair than the one we now know.) He was also a banker (Commercial Bank of Albany) and served on the board of water commissioners, the Albany Exchange Company, the Albany Savings Bank, the Albany Pier Company, the Syracuse Coarse Salt Company, and the Watervliet Turnpike Company. His last residence was 142 State Street. Through a convoluted path of ownership, Townsend’s Syracuse associations mean he left a mark there, as well. The Townsend Block and Townsend street both took their name from the family’s dealings, and they owned some of the most prominent land downtown, were tied in with the James and McBride families, and descendants operated businesses there. James provides another connection between the Capitol City and the Salt City, and in 1958 Edgar Van Olinda put the story together for us:

“It was an Albanian, William James, for whom James St. in Albany and James St. in Syracuse are named, who was one of the pioneers in the salt business. He was the founder of the famous family of the same name [which later included the author Henry James] and conducted a store at State St. and Green. At the height of his prosperity he was rated as the ‘second wealthiest man in the state.’ . . . Mr. James became interested in the salt business and with a Mr. Townsend, head of the Townsend Furnace Co. of Albany, was a pioneer in one of the great natural resources of Syracuse. Mr. Townsend manufactured the great iron kettles in which the salt was processed. Salt from these mines was shipped down the Erie canal to Albany where it was unloaded for reshipment to New England.”

It wasn’t just Albany and Syracuse – the Herald reported that the Townsends “invested their profit in a number of enterprises, including a nail and iron mill at Troy, a furnace and machine shop in Albany, a cotton mill at Cornwall-on-the-Hudson, a line of passenger boats on the Hudson river, a flour mill at Greenbush, real estate in Albany, Syracuse, Michigan, Ohio and Illinois.”

Another source, the Genealogical and Family History of Southern New York, says Isaiah was born in 1777, and moved to Albany in 1799 with John, “and together they started an iron foundry, in 1807.” After John’s death, in 1849 it was operated by Isaiah’s son Franklin (born 1821) and John’s son Theodore; in 1856, it became a Franklin-only affair. Franklin raised the 113th Regiment in the Civil War, later was adjutant-general for New York State for five years, and became mayor in 1850. In 1871, Rufus King Townsend took his father’s place and became sole proprietor in 1882 but when he died in 1895, his father Franklin again took control until the company was organized as a stock concern. That occurred in 1896, when The Townsend Furnace and Machine Shop Company was incorporated with capital of $80,000. At that time, it was said to be the “oldest enterprise in Albany that has been continuously conducted by the members of the same family,” and in fact Franklin Townsend remained as president, with Ledyard Cogswell as vice president, and Ezra Loughren as superintendent.

Initially, the foundry was located in a very surprising location – half a block from the current capitol (and so not that far from the old one), on the edge of a mostly residential district on Hawk Street at Elk (which is no longer there). Franklin Townsend, when he ran the place, lived not far away at 4 Elk, and owned properties between Elk and Lafayette as well. The furnace was putting out “all kinds of Ploughs and Plough Castings, Cultivator teeth, Sleigh Shoes, Scrapers, Wagon and Cart Boxes, Sash and Scale Weights, Cistern Curbs, Sink Pans and Traps, Water Basins, Oven Moulds, Furnace Doors, Potash and Cauldron Kettles of all sizes, &c.”

In 1870, a deal was made to move the foundry, and the old site became the St. Agnes School.

“We understand that Hon. Erastus Corning has just concluded a purchase of the Townsend Furnace property, on Elk and Hawk streets. The present buildings will be thoroughly renovated and then occupied by the St. Agnes school, recently established by Bishop Doane . . .The one house leased for its use proved by far too small, and the school opened with the two houses upon Columbia place filled to their utmost capacity. A further extension has been rendered necessary by the numerous applications for admission. The Townsend Furnace, improved as Mr. Corning’s liberality and judgment will be sure to have done, will give the school one of the most healthful and commodious locations it were possible to find.”

As an aside, the keeper of the flame over at Albany: The Way it Was tells us that before the Episcopal cathedral was built, some of the old foundry served the purpose, and was referred to as “Our Lady of the Furnace.” As for the foundry, at its new location:

“The works were located on Broadway, Rensselaer and Mulberry streets, fronting upon the Hudson river for 180 feet, and the brick building was four stories high. The patterns in stock there represented the work of three generations, and were very valuable, for this concern had acquired ownership of the Albany Eagle Furnace and three other plants of similar nature … The brothers had a wide circle of prominent acquaintances, and aided Governor DeWitt Clinton materially in his project of establishing the Erie canal. They were the pioneers of the industry in this part of the state.”

One could go on and on about the intertwining of the powerful people involved in the Townsend operation. John married Abby Spencer, the daughter of Ambrose Spencer. Franklin married Anna Josephine King, the daughter of Rufus King, whom you best know for the memorial in his honor, which is the statue of Moses in Washington Park. The Townsend name is involved in everything old Albany – the Academy, seemingly every bank, the Fort Orange and University clubs, the Albany Embossing Company, the State Normal College – everything. It if stood up or lent money, chances are there was a Townsend name somewhere on it.

We haven’t found a definitive end date for the Townsend Furnace – it was still in business in 1938, listed as 132 years old in a newspaper business directory (which would be 1806). But again with a little help from our friends, we learn that John Rehfuss and a partner bought the foundry, sometime around the 1920s, and seems to have continued in operation until 1953. When it burned in a major fire (a little ironic, given that the furnaces were no longer in operation) in 1955, it was listed as vacant. Nowadays it’s just part of the southern end of the U-Haul Center’s parking.

Thanks for the photos of the foundry building go to The Albany Group Archive.

Days after posting this, we remembered that we had found an amazing remnant of the Townend Furnace over on Paula Lemire’s blog, a post from way back when – a Townsend Furnace utility cover, on Washington Avenue near the State Capitol: 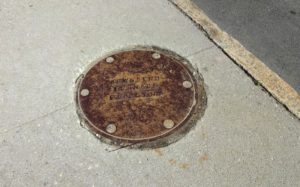