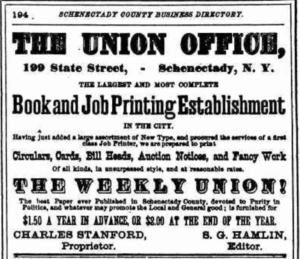 So we talked a little bit about the life of Leland Stanford (whose life could fill more than a volume or two) and father Josiah Stanford (about whom information is sadly scant). Today, we’ll talk about Leland’s brother, Charles, who despite having gone off to California with Leland, returned and made a lasting impression on the area. Much of this information comes from Harlow’s “Life Sketches of the State Officers, Senators, and Members of the Assembly.”  It gives Charles’s birthdate as April 26, 1819, in Watervliet (which is now Colonie — what is now Watervliet was then West Troy). “After receiving a common school education, young Stanford further prosecuted his studies at the Prattstown Academy, in Steuben county, and in the Clinton Liberal Institute, in Oneida county. Leaving school, the future Senator devoted his time to the assistance of his father upon the farm, and in the prosecution of his various contracts.” In 1844, Charles was awarded a large contract to fill and grade the ravine in Albany known as the Hudson street hollow, which was followed by several railroad contracts.   His obituary in the Albany Journal said, “In 1850, when California opened its gates of golden promise, Mr. Stanford migrated to that state, where with his three brothers he established the commercial house of the Stanford Brothers, which soon rose to be the largest and wealthiest on the Pacific coast. In 1859, branches were opened and successfully operated by the Stanford Brothers in Melbourne, Australia, and in Sidney [sic] and New Zealand.” Harlow says that in 1850, Charles went to California, and his brothers accompanied or soon followed him. “In connection with, we believe, three of them, he founded a commercial house, which soon rose to be one of the largest and wealthiest upon the Pacific coast.”  The successful company branched out to Melbourne, Sydney and New Zealand. In order to be closer to the center of retail, New York City, Stanford returned to the east coast and bought a farm in Niskayuna in 1861.

He quickly became involved in Republican politics, serving in the Assembly in 1864 and 1865. One account says that he established Schenectady’s The Daily Union newspaper as his campaign vehicle for the State Senate, in 1865; he served through 1869. The newspaper’s building, then known as the Stanford block, still stands on Broadway just north of State Street, the back part of what later became the Imperial Shop and is now Mexican Radio restaurant. The newspaper itself became the Schenectady Daily Union in 1894, and in 1911 merged with the Evening Star to become the Union-Star, which was Schenectady’s evening newspaper until 1969, when it decamped for Albany in a merger with the Knickerbocker News. “While Mr. Stanford was a member of the Senate in 1867, he made a raid on canal contractors and expenditures, and became the head of what was known as the ‘Stanford investigation committee.’” It was claimed that “to the bold, fearless, and rigid scrutiny of Senator Stanford is the public indebted for the exposure of the nefarious frauds which have been perpetrated on the canals of the state.” In 1867, he was Schenectady City Water Commissioner, charged with supplying the city “with a sufficient quantity of pure and wholesome water,” which led to the reorganization of the Schenectady Water Company, with Charles Stanford as president, in 1869. He was president of the Schenectady County Agricultural Association in 1868, organizing the first annual County Fair. He remained proprietor of the Union until 1883. A biography of Leland says that Charles was also president of the Schenectady Knitting Mill Company (established 1875), the Gas Company, and the McQueen Locomotive Works. It was Charles’s death in 1883 that also caused the death of the McQueen works, which may have been serendipitous, because the empty McQueen factory buildings proved attractive to Thomas Edison as the place to establish his new electric works. Read about it here.)

“Mr. Stanford was a man of robust and portly frame, of fine presence and an easy dignity of manner. In the senate he was a working rather than a talking member.” He made his home in the family estate in what was fairly remote Niskayuna, where Balltown Road intersects the Albany Turnpike (now Route 5). The estate was known as Locust Grove, originally owned by John Duncan with a house built by noted architect Samuel Fuller in 1761; the original house was burned and rebuilt at allocation 100 yards north of the original site in 1791. It moved to a Captain Hand, then to General Philip Schuyler, then to John I. Vrooman, then to Josiah Stanford, father of Leland and Charles. (Larry Hart wrote in 1962 that Schuyler “was the father-in-law of Alexander Hamilton, who married Katherine Elizabeth Schuyler in 1780. Her name is inscribed in a northeast room window of the house.”) Josiah willed it to Charles, who made extensive alterations in 1865. “For many years while Charles Stanford resided at Locust Grove the farm was famous among racing men and men at the turf as a being a breeding farm for first class trotting stock.” Not surprisingly, many of the articles we find from the time mention his horse activities, and this was something he shared with Leland, whose very famous west coast stud farm at Palo Alto is still part of Stanford University. Charles’s son Welton and his family lived at Locust Grove (it is said that Welton set a precedent in being the first to copyright the name of a farm, “Locust Grove Farm”), but the family’s tenancy ended with the purchase of the estate for the Ingersoll Memorial for Aged Men, and some of the land became the Schenectady Golf Course in 1925. Interesting coincidence: the Ingersoll who made the bequest establishing the home for aged men was George T. Ingersoll, who was, like Charles Stanford, a superintendent of water for Schenectady. “The Stanford family contemplates moving to California and was desirous of seeing the property used for such a worthy cause as that of the Ingersoll memorial. The property will probably include many pieces of furniture, and other household effects, gifts of the Stanford family to the cause, as well as the orchards, gardens, barns and keeper’s residence, which are included in the purchase. The house contains large parlors, sitting rooms, dining room and library on the first floor and a dozen chambers on the second floor.” Some of the house, as we previously noted, still stands, occupied by a Berkshire Bank, although not on the original or even the second site; it was moved considerably some years ago. Whether Katherine Schuyler’s name is still inscribed somewhere on a window frame, we are simply dying to know, but it seems too much to ask.