Way back when, Green Island was an island, separated from the rest of what is now Colonie by the Mohawk River (a separation reiterated by the Erie Canal), and separated from Troy, as it is today, by the Hudson River. In the late 19th century, it had a bit of industry in the form of shops for the Rensselaer and Saratoga Railroad, and a location that was convenient(-ish) to the canal and the industries of Watervliet. And legend has it that it might have remained a fairly sleepy island had it not been for a camping trip.

It wasn’t an ordinary camping trip. It was a camping trip by a group known as The Four Vagabonds, and that group was made up of Henry Ford, Thomas Edison, Harvey Firestone, and John Burroughs. This unlikely group of titans of industry and America’s foremost naturalist journeyed together in various combinations many times from 1915 to 1924. The Henry Ford Museum of American Innovation says in 1916 the four journeyed through the “New England Adirondacks and Green Mountains” (we’ll need to have a talk with the museum about where the Adirondacks are; spoiler alert: not New England), that they travelled further south in 1918, and came back to the Adirondacks and New England in 1919, to Burroughs’s home in the Catskills in 1920, and on and on. In case one might think they were roughing it, the 1919 trip “involved fifty vehicles, including two designed by Ford: a kitchen camping car with a gasoline stove and built-in icebox presided over by a cook and a heavy touring car mounted on a truck chassis with compartments for tents, cots, chairs, electric lights, etc. On later trips, there was a huge, folding round table equipped with a lazy susan that seated twenty.” Remarkably, or perhaps not given that Edison was one of the campers, there is video of their 1916 camping trip to Roxbury, NY. One of those camping trips was to Green Island on August 4, 1919, camping at a site overlooking the Federal Dam, a site the Troy Times Record reported (in 1971) intrigued Ford because of its potential water power.

The camping trip did happen, but it came after Ford had already bought property from the Tibbits family in August of 1918; his plans were well underway. The Troy Times reported in December of 1918 that Ford said, “If I could obtain permission from the United States government to use the water-power from the government dam which spans the river from Troy to Green Island and abuts upon my property, I would get busy upon the erection of a factory within a week.” The goal for the use of the former Tibbits property on the north end of the island was the manufacture of farm tractors. “Twenty-five thousand horse-power is constantly going to waste as the Hudson sweeps over the dam and this power should be at work turning water-wheels, generating electricity, and operating machinery,” Ford said. “As soon as the factory is completed thousands of men will be given employment, and machines for the cultivation of the soil will be turned out in great quantities for shipment throughout the whole world.” The paper reported that the Tibbits family had held the 154 acres land for more than a century, from south of where the Mohawk River emptied into the Hudson to the point where the Barge Canal united with the river. “It is the Detroit manufacturer’s intention to make this his export plant, sending his tractors down to the sea in barges when possible and by all the readily accessible rail lines when the Hudson is closed by ice.” In April 1919 Ford visited the site and Troy, and began agitating to have the plant erected as soon as possible. During the camping trip on August 4, in what was known as Powers’s Grove, “they selected a cornerstone for the new building.” It was reported that Ford, Burroughs, Edison and Firestone carved their initials into the stone.

Hydro-electric generation was not entirely new at that moment in time, but it was the subject of great interest. “The employment of water-power in such an immense enterprise will be of great interest to electrical engineers, although there are no difficult problems involved in the installation or operation of a hydro-electric plant at this place. Gov.-elect Alfred E. Smith has talked over the plan with Mr. Ford, and in a public address has declared that part of his administrative policy will be to develop all possible water-energy in New York state, which is now being wasted. Recent news from Washington, too, is to the effect that national legislators are forming committees to investigate water-power and to encourage its development, and so the prospects are bright that the Hudson’s 25,000 horse-power at Green Island will not long be allowed to flow profitlessly away.”

Local business and political leaders were all for it, recognizing that the plant would quickly employ thousands. Some months later, in April 1919, Gaston Plantiff, Eastern manager of Ford Motor Company, was in the area with Ford and talking to the newspapers and hyping up the attributes of his employer. Plantiff said that when entering a new enterprise, Ford always combined philanthropy and business, “the former being his prime goal, while the latter is employed merely to protect his interests.” Plantiff said that Ford always had in mind “the potential assistance he may give the people of a community who only await to clasp the extending arm of succor of one who is able to lift them to a state of bloom from the stagnant industrial waters, by which they are encompassed.”

Then, interestingly, Plantiff declared that “Mr. Ford has more money now than is safe for one man to possess. He want[s] no more, nor does he seek aggrandizement politically. What he desires now is to give the workingman a chance to enjoy the prosperity which this country will enjoy . . . When he erects a plant, he does so with the sole purpose in mind of giving employment to those who need it. This is Mr. Ford in a few words.”

“Mr. Plantiff stated that after Mr. Ford visited the federal dam in Troy yesterday, he actually showed sign of emotion at beholding all the valuable water, which may be used to generate power, going to waste. Mr. Plantiff declared that no where else where Mr. Ford sought to establish a plant could be found the facilities that exist right here, and he deplored the fact that so much difficulty had to be experienced in securing the use of the dam, which, he stated is of absolutely no benefit to the community at the present time except that it provides a beautiful view.”

So it continued to be a matter of securing the rights to the power. Unfortunately, as noted above, there was interest in waterpower as a matter of policy, rather than as a one-off grant of rights, and so it took some time for Congress and the Executive Branch to work out a broader federal waterpower bill, which finally became law in June of 1920. It was initially thought that it had been subject to a pocket veto, until the Attorney General ruled that President Wilson had ten days after Congress adjourned to sign bills, and Wilson signed it within that time. That law authorized a commission (made up of the secretaries of War, Agriculture, and Interior) to lease waterpower rights on all public lands, forest reservations, Indian reservations and navigable streams for up to 50 years. On its signing by President Wilson, Ford announced that construction of the tractor plant at Green Island would begin as soon as the license could be granted. Mayor Cornelius Burns of Troy, chairman of the hydro-electric committee of the New York State Conference of Mayors, tried to ensure that the dam would be the first project considered once the commission was organized.

In fact, Ford’s license was the first approved by the new Federal Waterpower Commission; it came on February 28, 1921. It was reported at the time that the plans called for construction of a plant that would cost $10 million, to manufacture tractors and other farming implements. The main building would be nearly 1500 feet long, and everything would be heated and lighted by electricity from the hydro-electric plant. Initial employment was projected at 2000, with an ultimate number of 8000. The cornerstone of the plant was unveiled at Ford Day, September 15, 1923. It was a day for dignitaries, with speeches by former Governor Glynn, Congressman O.C. Merrill (who issued the permit as executive head of the Federal Power Commission), former Mayor Burns, and more (though not Henry Ford). They dedicated Ford Park and inspected the plant and power house. 1,000 people were employed at the time. 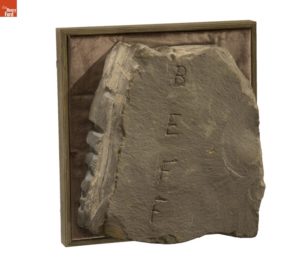 At some point, the plant was converted to the production of automobile radiators and heater cores. It was reported to employ 1500 people in 1973. At the time of its closing in November 1988, the Associated Press reported that “A stone displayed at the plant with the initials of Ford and his camping companions – Thomas Edison, John Burroughs and Harvey Firestone Sr. – may be donated to a museum.” We’re glad to report that the cornerstone appears to have survived, but sorry to report that it is no longer in the area – it is now in the collection of The Henry Ford Museum, and not on display to the public.
The hydroelectric facility continues to bring low-cost power to Green Island; it is now controlled by the Green Island Power Authority.

One thought on “Mr. Ford Builds His Dream Hydro Plant”