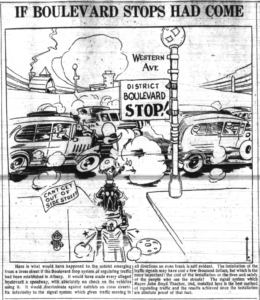 While the automobile was already reshaping our society in the 1930s, it was still a time when even adding some stop signs would make the news. Essentially, the boulevard stop system would remove red light signals, create longer uninterrupted straight-aways and require those entering them or crossing them from side streets to come to a stop. It was developed in the 1920s. Failure to come to a stop entering a designated boulevard was a violation, though news reports indicate that things like pesky signage weren’t always uniformly part of the implementation in cities across the country. It was studied in 1926 in Albany, and advocated by the Evening News but vigorously opposed by the Times-Union;  it was roundly rejected by Mayor Thacher. It was talked about and rejected again in 1928. It came back in 1934, when the Whitehall Road Improvement Association tried to get something done about speeding, and soon a plan to add a “boulevard stop system” was making the news. James A. Kirwin, the deputy commissioner of public safety in charge of traffic, was not convinced that Albany should use the system, which the Evening News reported was in use in many cities throughout the country.

“It is my personal opinion that the use of boulevard stop signs will not reduce the number of accidents particularly where pedestrians are concerned,” Kirwin said at the time. “The margin of safety probably will be increased somewhat for motorists, because cars emerging from side streets will be forced to enter main thoroughfares slowly. I contend, however, that the margin of safety will be lowered for pedestrians. If motorists on main thoroughfares are sure of the right-of-way, they will travel much faster than they do now. That will tend to expedite the passage of traffic through the city, but it will make it much more dangerous for pedestrians to cross such main streets as Madison avenue, Western avenue, New Scotland avenue and Delaware avenue.” He indicated that his mind was not closed on the matter, which turns out to have been a good thing. In 1937, Mayor Thacher signed an ordinance starting a pilot program for the boulevard stop. The Times-Union said that the boulevard stop signs would be “time-savers to motorists as well as money-savers to a city. There are few motorists who at one time or another haven’t ‘cussed’ a red signal which flashed on as they approached it and remained that way for a few minutes with no car passing on the green light side.” By then, James Kirwin was Police Commissioner, and was tasked with installation of boulevard stop signs at Main and Ryckman Avenues; Clermont and Melrose Streets, Melrose and Eileen Streets, and Lincoln Avenue and McKinley Street. “Both the Mayor and Mr. Kirwin declare that if the four experimental signs prove successful others probably will be added.” Keep in mind that at the time, the city speed limit was 20 mph. The installed signs were of metal construction, only four feet tall, hexagonal, and reflectorized. They said “All / Stop / Police.” Parking was barred within 10 feet of the signs, designated with white paint on the curb.

It doesn’t appear that the experiment led to any further use of boulevard stops in Albany. In 1946, the Albany Chamber of Commerce was complaining about the “archaic” 20 mph speed limit, and suggested a change “in the present traffic light setup to the boulevard stop system, which is working successfully in other cities, which would probably relieve safety and at the same time speed the flow of traffic so that Albany would not be known from coast to coast as a good city to avoid because of the slow traffic movement.”