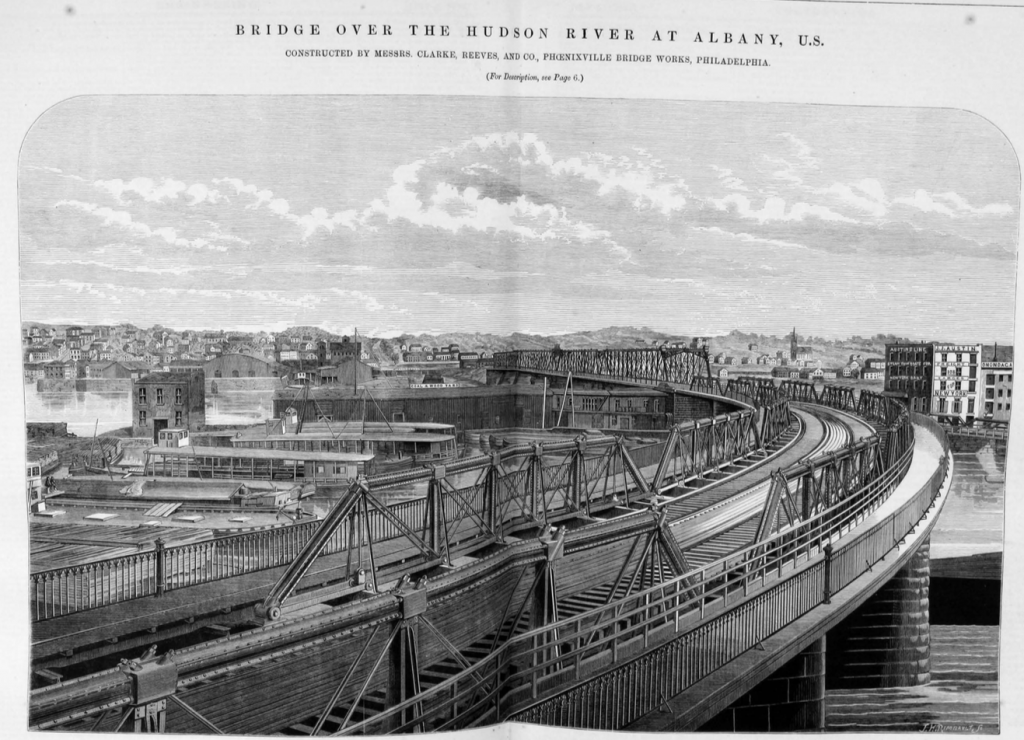 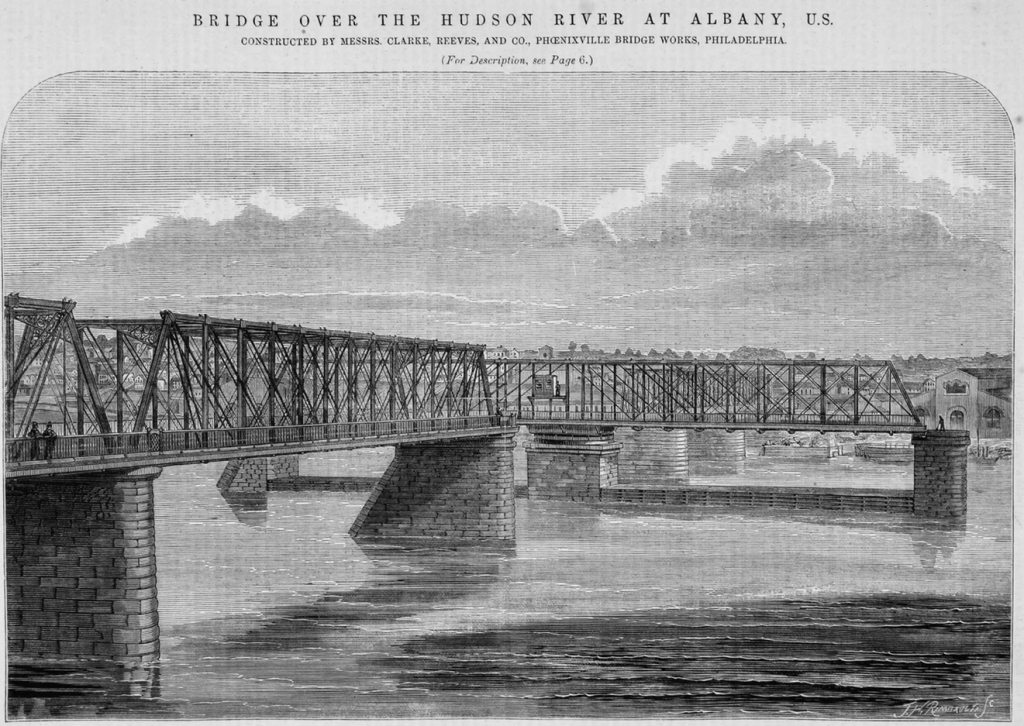 We’ve written before about the Maiden Lane Bridge, giving some of the history of what was the second bridge built across the Hudson at Albany. In that story, we included a number of specifications that were published when the contract to build the bridge was awarded to Charles Newman of Hudson in 1870. Now we find it’s unclear what happened to that contract, because in 1872 the British journal Engineering provided a very detailed description of the bridge as it was built, and credits it to the firm of Clarke, Reeves, and Co. of the Phoenixville Iron Works. Their offices were listed as Philadelphia, but the foundry itself was about three blocks from Hoxsie’s current home in the lovely little borough of Phoenixville, PA. Any question about which account of the builder is quickly decided in favor of Clarke, Reeves from the litho provided in the journal, because the trusses of the bridge are clearly constructed from the patented Phoenix column.

As the Wikipedia entry explains, “The Phoenix Column, patented by Samuel Reeves in 1862, was a hollow cylinder composed of four, six, or eight wrought iron segments riveted together. The resulting column was much lighter and stronger than the solid cast iron columns of the day.”

In their 1873 album of designs, The Phoenixville Bridge-Works, Clarke, Reeves & Co., described their bridge Design H:

“This is our regular pattern of through pivot-bridges, with our patent turn-table, of a simple and effective construction. Where a pivot-pier has to be specially constructed, considerable economy will be obtained by carrying up a circular wall of masonry, and reducing the depth of iron ring . . . Our pivot-bridges have always given satisfaction; and we refer particularly to that over the Hudson River at Albany, belonging to the New York Central and Hudson, and the Boston and Albany Railroads, as a model of a quick-working and substantial pivot-bridge.”

Worthy of note, for those who aren’t fascinated by engineering specifications:

The Maiden Lane bridge carried trains across the Hudson River from Dec. 28, 1871 until the closing of Union Station in 1968. Nothing was wrong with it, but it was in the way of progress in the form of I-787, and the entire span was demolished by January 1970.

The details below come from Engineering, July 5, 1872. To the extent that they differ from what was reported in 1870, we’ll assume these were the as-built specifications.

BRIDGE OVER THE HUDSON RIVER.

We publish, this week, a two-page engraving, together with another illustration on page 4, of  a fine railway bridge recently erected across the Hudson River, at Albany, by Messrs. Clarke, Reeves, and Co., of the Phoenixville Iron Works, Philadelphia. The bridge, which consists altogether of fifteen spans, and has a total length of 1740 ft., or nearly a third of a mile, was built under the following specification:

It will be noticed from the specification that the floor system is stronger than is usually adopted for American bridges, but this is a step in the right direction. To provide for expansion one end of each girder was fixed to the pier while the other end is carried upon rollers formed of lengths of 1-3/4 in. cold rolled shafting mounted in wrought-iron frames.

The engine, and boiler, and all the machinery required to actuate the draw span is situated within the turntable and is out of sight. The draw span can be opened and closed very quickly, and on one trial the time which elapsed from the time of setting the cams in motion to free the ends until they were again in place, and the bridge locked to receive trains, the span having in the mean time been swung open 90 deg. passed a steamboat, and closed again, was only 2 minutes 15 seconds.

The outside wheels mentioned in the specification really merely stead the draw, and support it so as to give a good and steady bearing for the passing of trains. When being swung the weight is carried by the centre. The whole weight of the draw span and lines is about 350 tons; but before steam power was applied it was found that two men could move it easily. The ends of the draw span are fitted with an efficient arrangement of locking cams, of which we hope to be able to publish detailed views on some subsequent occasion.

The system of construction mentioned in the sixteenth paragraph of the specification is always strictly adhered to at the Phoenixville Bridge Works, and we are informed that the bridges built there always return to their original camber, without readjustment, after testing.

The weight of iron in the bridge is as follows:

The bridge is altogether a very fine example of recent American practice, and the total cost of the superstructure, including machinery for draw span, sidewalks, &c., was 320,000 dollars currency.