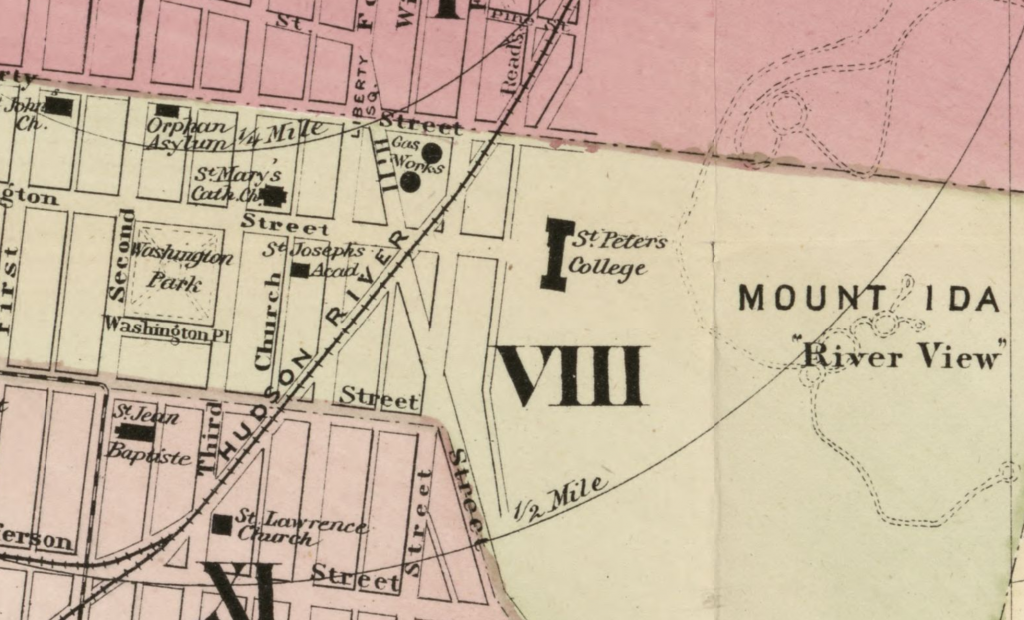 Imagine our surprise when we were looking at an old map of Troy (as we do) and suddenly saw something there we’d never seen before, and had never even heard of: St. Peter’s College. And it turns out there was a reason we hadn’t heard of it – it just didn’t last long. In fact, it never opened. In fact, it was completely destroyed in a landslide.

The college was the brainchild of Father Peter Havermans, something of a force of nature in the Catholic community of Troy, and the Christian Brothers who ran St. Joseph’s Academy, as they had outgrown their building’s capacity and wanted to offer higher branches of study. (At this time, the distinction between high school and college education wasn’t always so crystal clear.) Father Havermans bought land from a Mr. Heartt and Judge Mann, “situated on the hill, under the site of the grounds surrounding Mr. Vail’s beautiful residence,” at the far east end of Washington Avenue, below Mount Ida. Below Mount Ida turns out to have been a poor choice.

The cornerstone for the new college was laid September 19, 1858. There was a formal procession several blocks in length, with religious societies and schoolchildren, orphans from the asylums, and Doering’s Cornet Band. “The corner stone was brought upon the ground about half-past four o’clock, and arranged in its position under a derrick at the central angle of the walls, by fourteen men. It bears engraved upon its front the name of the College, the date of the ceremony accompanying its disposition on the walls, and appropriate symbols. It contains the names of those who have contributed to the erection of the building, together with the usual documents, such as a copy of each daily newspaper, the name of the reigning Pope, the name of the President of the United States, the Governor of New York, the Mayor of the city, the number of patients in the Hospital, the number of orphans, &c.”

The building went under construction, 200 feet in length and five stories high, with two towers. Two stories had been completed by March 17, 1859. At eight o’clock in the evening, Mount Ida slid downhill. The Troy Daily Whig reported:

“A man who lives near by, and was a witness to the catastrophe, says that the earth slid down with very little noise till it reached the rear wall of the college. Here its progress was stopped for a moment, till, gathering new strength, it burst the barrier, and, with a sound like distant thunder, filled the building in a moment, demolishing beams, link-walls and partitions, and covering the entire central part of the edifice. The front wall was also crushed in, but it sufficed to stay the progress of the avalanche.

“A large crowd soon assembled at the scene, and many of them risked their lives in vain attempts to explore the ruins and discover the extent of the disaster. People could be seen in the bright moonlight standing upon projecting masses of earth, directly under overhanging bluffs. Although the particulars of the calamity cannot be accurately ascertained till to-day, it is feared that St. Peter’s College can never be rebuilt in the same locality. The centre of the building is buried up to the depth of several feet.”

No one was injured, owing to the timing – St. Patrick’s Day was a holiday. Had it happened during a workday, it could have killed any number of the 100 workmen who were engaged in the construction. “It is conjectured that if the college and its terrace had not been constructed, unrestrained by this barrier, the earth would have reached the tenement-houses [across the street], and, perhaps, even destroyed the hospital.” The loss was estimated at $27,000, the land was considered unsuitable, and the effort to build the college never recovered.

So the college was never even completed. Yet, it has a strange persistence on the Sampson, Davenport maps of West Troy and Troy, still depicted in editions from 1873-1878, causing us wonder what other buildings that were never even built are shown on these old maps.

One thought on “The College That Never Was”