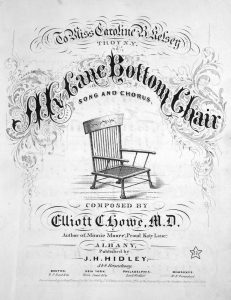 Our endless search for all things Albany and Troy recently turned up this bit of sheet music from 1856 (courtesy of the Lester S. Levy Sheet Music Collection of the Johns Hopkins Sheridan Libraries and University Museums). Published in 1856 by the music publisher J.H. Hidley of 544 Broadway in Albany, “My Cane Bottom Chair” was composed by Elliott C. Howe, M.D. (author of “Minnie Moore” and “Proud Katy Lane”!) and dedicated Miss Caroline B. Kelsey of Troy, N.Y., who may forever after have wondered if every eligible young doctor she met developed a disturbing fetish for the chairs in which she had sat:

But of all the cheap treasures that garnish my nest,
There’s one that I love and cherish the best;
For the finest of couches that’s padded with hair,
I never would change thee, my Cane bottom’d Chair.

Tis a bandy-legg’d, high-shoulder’d worm-eaten seat,
With a creaking old back, And twisted old feet;
But since the fair morning when Fanny sat there
I bless thee, and love thee, old Cane bottom’d Chair.

If chairs have but feeling in holding such charms,
A thrill must have pass’d through your wither’d old arms;
I look’d and I long’d, and I wished in despair,–
I wish’d myuself turn’d to a Cane bottom’d Chair.

It was but a moment she sat in that place;
She’d a scarf on her neck, and a smile on her face –
A smile on her face, and a rose in her hair,
And she sat there and bloom’d in my Cane bottom’d Chair.

So who composed this deathless music? Elliot C. Howe was born in Jamaica, Vermont in 1828, and came to New York early in life, getting his education in the academies of Troy and Lansingburgh. His friend Charles H. Peck said in a biographical sketch (published in the Bulletin of the Torrey Botanical Club) that Howe had an early love of natural science, forcing on geology, zoology and botany, but that “music also received a share of his attention and pharmacy had attractions for him.” He studied medicine in New York City, and also wrote for the New York Tribune under Horace Greeley. He received his M.D. and came back to Troy for three years, serving as leader of the choir of the Fifth Avenue Methodist Church. He then taught music, physiology and botany at Charlotteville seminary (Schoharie County) until the seminary building burned down, and then taught music, botany and German in Fort Edward. “Here he became acquainted with Miss Emily Z. Sloan who was also a teacher in the institute and who afterward became his wife.” He became an avid mycologist, which is how Peck came to know him. After seven years, Howe renewed the practice of medicine in New Baltimore, but then moved on to Yonkers for thirteen years before returning to Lansingburgh as his health failed; he died in 1899. Peck wrote:

“He was the author of several pieces of musical composition, among which are ‘Minnie Moore,’ his favorite; ‘The old Arm Chair,’ ‘His pleasant Grave,’ ‘The dying Drummer Boy’ and ‘The Wanderer’s Dream,’ a piece which was played by the musicians of both armies during the Civil War.” He also wrote extensively on mycology, botany and more. His name was, Peck notes, “fittingly commemorated by two fungi, Stropharia Howeana Pk. And Hypoxylon Howeanum Pk.” Three of Howe’s fungus discoveries were named for Peck.

Peck didn’t give us much to go on by way of years, but we’re going to go on an assumption that Howe wrote this during his first return to Troy; once he was married it would be unlikely he’d dedicate such a thing to a single young woman. Miss Caroline Kelsey was a resident of Troy; in 1850, she was 24 years old and living with her mother, Hannah Kelsey. Hannah was a milliner; Caroline was a music teacher. They lived at 19 Fifth Street in 1857, and 13 Sixth in 1859.  It’s not hard to imagine a little romance between the choir leader and the music teacher, though at this remove it may be hard to imagine her being flattered by his paean to a chair on which she once sat. 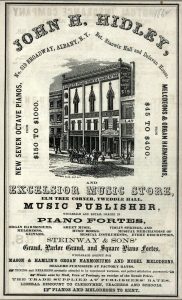 This sheet music was a thoroughly Albany affair. The lithograph was by Hoffman, Knickerbocker and Company, from an engraving by A. Tolle. The firm of Abraham Hoffman and Charles Knickerbocker, lithographers and engravers, was located at 518 Broadway, across the street from Hidley on the block of Broadway between Maiden Lane and Steuben St. Augustus Tolle was a printer and lithographer in the firm of Adler and Tolle at 26 Beaver Street.

We found some very random notes that indicate that John H. Hidley became a Steinway dealer in 1857, and ads from 1862 and 1863 show his continued association with Steinway, which lasted at least until 1865. We don’t get a strong sense of when Hidley’s business began and ended, though his music in the Library of Congress collection ranges from 1855 to 1865, and the store was still listed in the 1870 directory. A building marked as owned by J.H. Hidley is still on the 1876 Hopkins map, on the southwest corner of Broadway and Steuben, catercorner from the Delavan House.

One thought on “My Cane Bottom Chair”