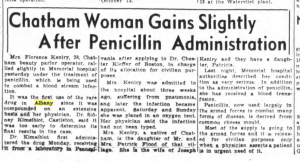 It seems almost impossible to imagine a world without antibiotics, but in fact penicillin is practically brand new, compared to some of the things we ramble on about here. On Oct. 6, 1943, its use was absolutely newsworthy, as the Times-Union reported on the recovery of a Chatham hairdresser:

“Mrs. Florence Keniry, 28, Chatham beauty parlor operator, rallied slightly in Memorial hospital yesterday under the treatment of penicillin, which is being used to combat a blood stream infection. It was the first use of the rare drug in Albany since it was compounded on an extensive basis and her physician, Dr. Sidney Kimelblot, Castleton, said it was too early to determine its final results in the case.”

Not only was the drug new (discovered in 1928, but first used to treat infections in 1942), it was rare. If the Wikipedia article is to be believed (and it’s pretty well-sourced), the first patient, treated in March 1942 for streptococcal septicemia, used up half the supply. By June of that year there was enough for 10 patients. But it was seen as having an important use in treating troops in the war, and plans were developed for mass production in 1943.  Those plans were not yet in full operation when Mrs. Keniry fell ill with pneumonia, and her doctor had to apply to a Dr. Chester Kieffer at Evans Memorial Hospital in Boston, who was in charge of allocation of penicillin for civilian use. It would not become available to the general public until March, 1945. Sadly, Mrs. Keniry died of her infection despite the penicillin.

A month later, Albany dentist Paul I. Addison would also be in the news as the second Albany patient to receive penicillin, for a chronic bone infection resulting from a football injury. The newspaper reported that Albany Hospital had been designated as an institution for the study of penicillin because of its research facilities. Treatment of Addison’s chronic bone infection, which had not yielded to repeated operations and sulfa drugs, was of interest to the Army, which was dealing with such issues on the battlefield. And it’s appropriate that some of that research was done in Albany, given that it was home to Dr. Swinburne, Champion of the Limbs.