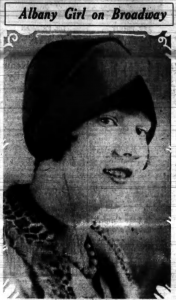 In 1927, Albany seemed to have no shortage of prominent players in the performing arts. Alongside the mentions of Ward Crane and Elizabeth Hines, the Times-Union also featured dancer Olga Beauman. “Struttin’ to Fame,” the T-U wrote, “Perhaps, is Miss Olga Beauman, popular young Albany dancing instructor, who has just joined the footlight folk as a featured dancer in the Brooklyn Strand Theatre. She has turned down a Ziegfeld offer, for the time, so that she may continue her classes in Albany with her theatre work.”

Olga Beauman was born around 1908. Her father James, was from the Irish Free State; mother Emily Beauman was from New Jersey, which is where Olga was born; the family was in Albany as early as 1903, and by 1910,  James was listed as running a dance academy in 1910, and both parents were listed in 1920. James Beauman’s dance academy was in Van Vechten Hall, on State, two doors east of Eagle. James was 26 years older than his wife, and 44 years older than his daughter; he died at age 70 during a heat wave on Memorial Day weekend of 1929, in a store on Hudson Avenue. After that, Emily and Olga continued to teach dance from their home at 399 State Street, Suite 707 (it’s the well-appointed building still on the northeast corner of State and what is now Henry Johnson Boulevard). Their dance school’s recital was performed in the Albany Institute of History and Art. In September of ’29, Olga did dance for Ziegfeld, in “Show Girl.” There were frequent mentions of her dance performances in the late 1920s, including performing as a featured dancer at New York’s Paramount Theatre in 1928, where was appearing “under the direction of Mme. Serova, noted dancing teacher.”

In 1927, Olga was identified with the latest dance craze, the “Black Bottom:”

WATCH YOUR GROCERIES – If you are a “Black Bottom” fan. Students at Rensselaer Polytechnic Institute have calculated that the new fangled dance required more calories than any other. The theory was virtually proved by students at Beauman’s Dancing Academy. Miss Olga Beauman said she could eat a big dish of corned beef and cabbage after she did the “Black Bottom.”

The RPI “study” concluded that an Indian war dance would only require the calories from “a few hot dogs – with mustard and onions,” and that an old-fashioned waltz only required 4 calories, “as against 20 for the ‘Black Bottom.’” Even the Charleston, taught by Miss Frances Wright of the Beauman Academy, was not as strenuous. So said science.

Also in 1927, Olga got her first professional contact, which came with a significant write-up in the Times-Union: 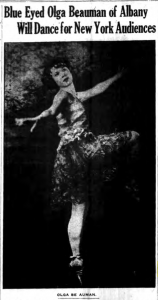 Golden hair and blue eyes from Albany will dance with nimble limbs before New York city audiences of Mark Strand theatres this winter, when Miss Olga Beauman, eighteen, daughter of Mr. and Mrs. James R. Beauman, of Beauman’s dance studio, fulfills her first professional contract. The contract calls for a week’s appearance once a month.

The call from the realms of Terpsichore came only a few short hours after Miss Beauman had returned from New York city where she has been a student at the Vestoff-Serova Russian School of Dancing. She will leave Albany tonight, blithe with the glory of her impending first professional appearance, for rehearsals at the Vestoff studio.

Her premiere will be at the Brooklyn Strand next Saturday and will consist of toe and jazz dancing.

Miss Beauman recently refused an offer to join the galaxy of Flo Ziegfeld’s brilliant satellites. The offer was through Alvertinia Rasch, well-known dancer, under whom Miss Beauman has also studied, and was rejected because Miss Beauman is “heart and soul a teacher,” and wishes to continue instructing pupils at Beauman’s academy. Her present contract allows her to continue doing so three weeks each the [sic] month.

“It is my first professional contract,” said Miss Beauman, with winsome smile and only a trace of nervous anticipation, “and despite appearances in Town hall, New York city, and in other cities, I feel, well, a little of the fluttering, which poets sing about. It’s the first rung on my calcimine ladder, and I hope to dance my way to the brilliant spotlight at the top.”

In 1931, Olga was still teaching with her mother. At some point, she met a young fellow named Hawley Ades, a graduate of Rutgers who directed the glee club and played piano in the jazz band, and then landed a position as the pianist for the Beauman Dance Academy. Hawley became an arranger for Irving Berlin and, later, Fred Waring; Hawley and Olga were engaged in February 1933.

We found a brief article from 1938 about the birth of their daughter, titled “Three Careers.”

“Hawley W. Ades, music arranger for Fred Waring’s orchestra, and his wife, Olga Bowman’s [sic] Albany’s own dance star, are the parents of a daughter named Audrey Caroline. At the present time opinions differ as to which road to fame the young lady will follow. The father desires a pianistic career, the mother wants to be perpetuated through the art of terpsichore, while the grandmother, Mrs. Mary F. Ades, wants to see an organist in the family.”

Hawley’s obituary says he and Olga retired to Florida in 1975, “where they were involved in a myriad of musical and dance activities.” Thanks to an alert reader with better searching skills than mine, we know that Olga died May 21, 1993. Hawley lived to the ripe old age of 100, spending his last few years in the Capital District, passing on in 2008; both are buried in Albany Rural Cemetery.