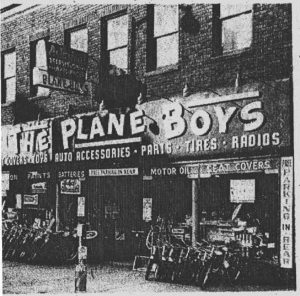 Speaking of Schenectady staples, that faded WGY Coin and Stamp sign was on the side of an old building, now gone, that we best remember as housing Plane Boys. A source of auto parts ad accessories, they also provided automotive service. Anti-freeze, dri-gas, snow tires, and Delco batteries. And sporting goods. Oh, yeah, and bicycles. It was the dream location for certain bicycle-obsessed teenage boys in the 1970s. We never actually bought a bicycle there, and it’s certain that the occasional set of tires, toe clips and handlebar tape we picked up from there wasn’t what kept them in business, but going in there and dreaming of those 10-speeds was always magical. They had a Campagnolo set, for crying out loud . . . they had to be serious.

The company started in 1945. For many years they were at 111 State Street, which I believe was later levelled to make room for a Kentucky Fried Chicken. They expanded to other locations on upper State Street and 900 Central Avenue in Albany. In 1963, they opened a modern location at 123 State Street, where owners Hy, Lou and Joe Plaine “decided the store’s customer needs could better be served with larger facilities . . . The new store is completely air-conditioned and its variety of wares consists of auto accessories, tires, auto seat covers, storage batteries and auto parts including mufflers, spark plugs, floor mats and other parts.”

But most important: “Also sold by the Plane Boys, operating under the corporate title of Plane Realty Co., Inc., are sporting goods and toys, new discount record department, new muffler shop, television and small appliances, houseware and hardware, and toiletries. New feature at the store is a snack bar for the convenience of customers.” They opened the new store Nov. 21, 1963. (A day later, the nation would be shocked by assassination and probably thinking very little of sporting goods.)

We’re not sure when they left this modern location. Eventually the family business would morph into skis and bicycles, and in recent years has been growing again with multiple locations under various names in the Capital District, including Albany’s Broadway Bicycle Co.

One thought on “Plane Boys”