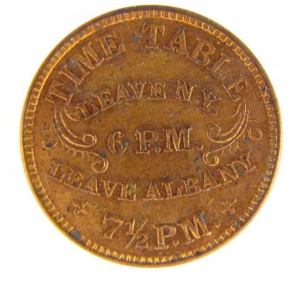 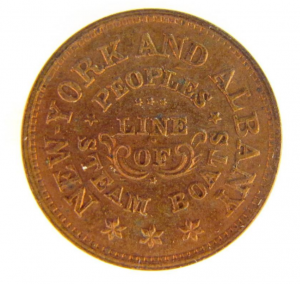 There are so many reasons to love the Smithsonian Institute – and not just that its first secretary was Albany’s Joseph Henry. It’s a treasure trove of wonderful objects like this one: a token from the People’s Line. The Smithsonian has no opinion on the date of this token, but does know that it was made by the Scovill Manufacturing Company of Waterbury, Connecticut – the button people.

Howell’s “Bi-Centennial History of Albany” holds that the People’s Line was established in 1834 as a day line, in opposition to the Hudson River Association Line, a consolidation of several lines that ran both day and night boats and involved “Commodore” Vanderbilt. With his typical lack of explanation, Howell reports that the People’s Line was sold to the Hudson River Association Line in 1835, but that in 1836 it was “revived” as a night line by Daniel Drew, with the ships West Chester and Emerald. The line grew quickly, and eventually Daniel Drew controlled most of the passenger liners on the river. In 1863 the Hudson River Day Line began with the acquisition of the Daniel Drew.

These tokens can be found on eBay; they generally claim to be from the Civil War era, but I haven’t found particular backing for that. It’s entirely possible there was another token for day runs, but all the tokens we’ve found are from the night line.