While there was a great hue and cry over the loss of Albany’s Union Station, the demise and demolition of Schenectady’s Union Station, happening at the same time for the same reasons, seems to have been met with more of a sense of resignation.

On the eve of the old station’s closure, on Friday, June 27, 1969, The Schenectady Gazette published an editorial simply titled “The Depot.”

“A significant event in the history of American railroading will take place at midnight Saturday. The Schenectady railroad station will close . . . It’s especially noteworthy because one of the first railroads in America (in this area we like to say it was the first) was constructed between Albany and Schenectady. The Schenectady depot bears the initials, “N.Y.C. & H.R.R.R.” for New York Central and Hudson River Railroad. When you look at the crumbling station you are reminded of the days when freight trains and passenger trains were coming and going night and day through Schenectady . . .

It is understandable that Penn Central wanted to close the Schenectady depot, for, like most railroad stations built half a century or more ago, it is a large mausoleum which no doubt impressed everybody when it was constructed but which is thoroughly impractical for this day and age, costing a mint of money to heat and to keep in satisfactory repair (which is thy there are not many people who want to buy it to make use of it as it stands).

With only a few customers, an old railroad station is like a gourd with a few seeds rattling around in it. The new station in Colonie is bitterly resented by some people, partly because it’s “out in the country” and because, as traditional railroad stations go, it’s very small. Yet, sad to say, it is probably large enough for the number of customers the railroad will have at least in the near future.”

On the same day, the paper reported that the real estate division of the Penn Central was negotiating for the sale of the station, “in keeping with the promise made to city officials two years ago at a Public Service Commission hearing.” It appeared that their big idea was to “convert the building into an opera house.” In March of that year, it had been reported that the Schenectady Light Opera Company had been negotiating for purchase of the 1908 facility, at an undisclosed price. From the Amsterdam Daily Democrat and Recorder:

“According to Light Opera Co. officials, the railroad station has great potential for development into a community theater seating about 500. An estimated cost of the necessary renovations has been set at $183,000. If the property is acquired a fund-raising campaign will be launched to pay for the building and renovations. According to Don Bush, chairman of the group’s committee to obtain a permanent home, ‘this is the best opportunity to come along in the 15 years of the group.’ The opera company is presently limited to two shows each year. With their own building, four or five shows each year would be permissible.”

Well, that didn’t happen, which may be one reason Schenectady Light Opera Company is still around today.

Whatever other talks were had about the future of Union Station came to nothing, and it was soon decided that it would be demolished. A February 13, 1971 article by the Gazette’s Larry Hart detailed its impending demolition.

“When it was opened to the public 63 years ago this month, given a community welcome with a formal dance held in the great hall, everyone was impressed with the grandeur of the interior – the great vaulted ceiling, curved mahogany benches, gleaming marble facing on all walls and the long line of ticket windows. This was Schenectady’s third station (not counting the western terminal on upper Crane Street, built for the Mohawk and Hudson Railroad about 1835) and was built and finished in 1908 in coordination with raised tracks throughout the city.” 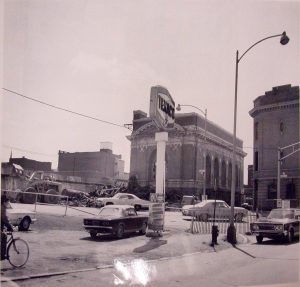 With the demolition of the station, parts of the railroad bridges over State and Liberty Streets, and most of the buildings on Wall Street, all that would be left would be an 180-car public parking lot. Other than a little bit that was turned into the “new” Schenectady Station in 1979, the bulk of the space remains a parking lot.