Those who remember Albany’s Union Station as a glorious destination in the ’50s and ’60s most likely benefit from the rose-colored glasses of nostalgia. A 1969 column in the Knickerbocker News acknowledged that “In its dying days, Albany’s Union Station was an odiferous and dingy cavern, but still, if you looked hard, you could see traces of the station’s earlier grandeur.” If you grew up later than the ’70s, you may not be able to understand just how dingy cities were back then – between coal ash, diesel fumes, and the horrendous exhaust that came out of each and every automobile, every structure was covered in soot. Likely the exterior of Union Station had never been cleaned, and by some accounts the same could be said of the inside.

Hoxsie hesitates to even bring this up because it excites passions even today, nearly 50 years after passenger railroads left Albany proper. But it’s worth looking at what caused Union Stations in Albany and Schenectady to be left behind, two “modern” new stations to be built in Rensselaer and Colonie, and the general collapse of passenger rail at about the same time.

For starters, understand that in the 1960s, passenger rail was deeply unprofitable, under assault from air travel, private automobiles, and truck freight on superhighways. The Pennsylvania Railroad and New York Central had discussed merging as early as 1957, when things weren’t quite so dire. The Pennsylvania started focusing more on real estate deals than on railroading, resulting in the destruction of its landmark Penn Station in New York City. When merger talks began again, they were said to be more about creating more borrowing power for financing other ventures than about consolidating an efficient business. The merger was federally approved in 1965, but took until early 1968 before the US Supreme Court finally allowed it. The merger apparently was never well-planned; the condition that all existing workers continue in employment ensured no efficiency would be gained, and a struggling economy, growing inflation and bad management of the freight business alienated customers. By 1970, the company would be bankrupt, and its collapse would lead to the federal creation of Conrail and Amtrak.

As early as 1960, there were plans to run an interstate highway along the Hudson River around Albany. Planned routes varied, but they kept coming back to plans that would eliminate most of the rail along the river. This would be difficult to do so long as the main rail crossing was the Maiden Lane Bridge – the highway would have to go over or under the tracks that connected the bridge to Union Station, causing some definite planning difficulties and leading state transportation officials to favor a plan that would simply eliminate that bridge.

As we have noted before, the Rensselaer side of the river had a long history of passenger travel, though it could not really be said that it had anything approximating a station in 1968. Albany was home not only to the New York Central / Penn Central passenger line, but also to the Delaware and Hudson line that ran through Watervliet and Mechanicville to Montreal. With the loss of the Maiden Lane bridge, both railroads had the excuse and reason to get out of an outdated, expensive-to-maintain station facility at Albany; the Schenectady station would also be closed. But, if the Maiden Lane Bridge had to go, trains still had to be able to cross the river, meaning the Livingston Avenue Bridge, which had been locked open for a period of years, would be brought back into service. Being single track, this would become a choke point on the system, but at least trains could cross. 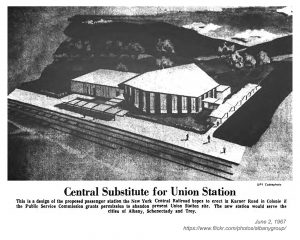 In 1967, the PSC approved a Penn Central proposal to replace the Albany and Schenectady rail palaces with “modern” new stations at Rensselaer, off East Street, and on Karner Road. Look at the accompanying drawing from 1967 and take a guess if that was ever built. Plans were submitted in February 1968 for a Colonie station, the Karner Road Depot, which would consist of a 30 by 50 foot building with a 960 foot platform, and a parking lot 100 by 250 feet. Rensselaer, originally designated as a passenger stop (way different from a station in railroad terms) would have a 65 by 170 foot building and a parking lot 230 by 350 feet. For the D&H, loss of the Maiden Lane bridge forced the Montreal line to bypass the Watervliet and Mechanicville stations, which at that time averaged two passengers per day, and go instead through Schenectady and up to Saratoga Springs. In September 1968, the PSC allowed the D&H to move across the river as well. 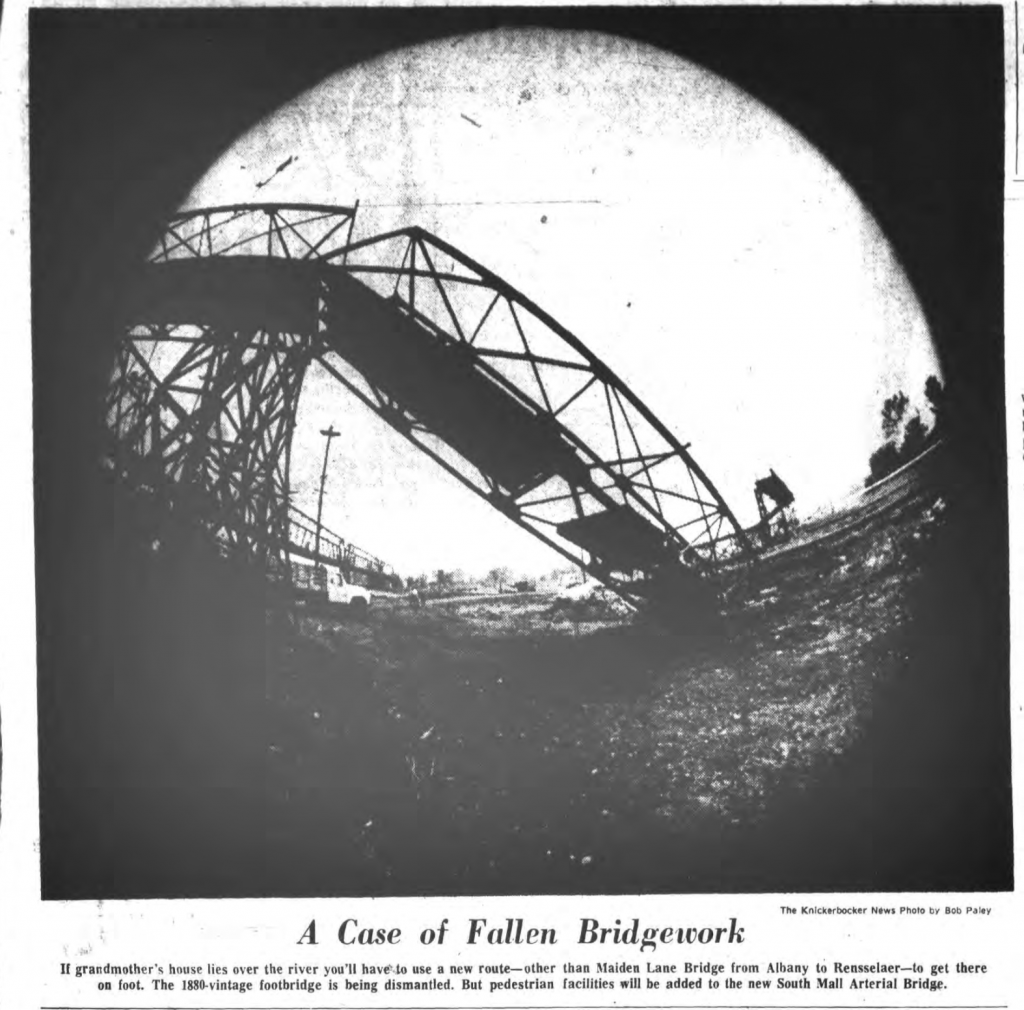 It was a good thing they did . . . in the same newspaper that this was announced, there was a photograph of the dismantling of the pedestrian footbridge that was part of the Maiden Lane Bridge. The cutline read, “If grandmother’s house lies over the river you’ll have to use a new route – other than Maiden Lane Bridge from Albany to Rensselaer – to get there on foot. The 1880-vintage footbridge is being dismantled. But pedestrian facilities will be added to the new South Mall Arterial Bridge.” (That’s now the Dunn Memorial Bridge, and while it is possible to cross it on foot, to call the crossing in any way a facility is to stretch the point.)

The Rensselaer station opened sometime in 1968, a box next to a grocery store that served as the region’s rail station until 2002. That Knick News columnist who in early 1969 called Union Station “odiferous” also said that

“In contrast, the Penn Central’s new Albany-Rensselaer station in Rensselaer is – with all due respect to our neighboring city – a rude comedown and a ride to the new station is a dispiriting experience. Situated at the northern edge of Rensselaer, the station is reached after a bumpy ride over narrow streets. It looks more like a small-town depot for short-haul buses than a railroad station and is tucked away in a shallow ravine as if the Penn Central were ashamed at what it had done, as well it might be. Let us hope that the railroad’s new Albany-Schenectady regional station on Karner Road in Colonie has more class.”

Well, one could hope.

On June 27, 1969, on the eve of the opening of the Colonie station, the Schenectady Gazette ran an editorial lamenting but understanding the march of time.

“When you look at the crumbling station you are reminded of the days when freight trains and passenger trains were coming and going night and day through Schenectady … It is understandable that Penn Central wanted to close the Schenectady depot, for, like most railroad stations built half a century or more ago, it is a large mausoleum which no doubt impressed everybody when it was constructed but which is thoroughly impractical for this day and age, costing a mint of money to heat and to keep in satisfactory repair (which is why there are not many people who want to buy it to make use of it as it stands).”

The Schenectady station would close at midnight the next night. 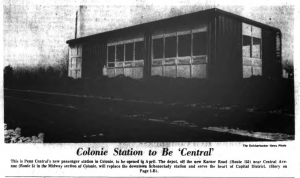 When the Karner Road station opened on Sunday, June 29, 1969, it was described as being equipped with a waiting room that measured 56 feet by 30 feet, capable of seating 48 people. The parking lot was paved (!), protected by guard rails, and would hold 50 cars. All five east and west trains would stop there. If you’re trying to figure out just where it was located (and we’re told the building is still there), the directions were to proceed to New Karner Road via Routes 5 and 20, turn west onto New Karner Road, follow that to Albany Street, take a left onto Albany Street and travel two blocks where the station is located on the left. There would be no café, but vending machines were promised.

A 1969 overview of the fate of Empire Service (which still exists, though not with the frequency it enjoyed half a century ago) in the Times-Union noted that

“The populace took to the super-highways in their super cars and to the airlines in the super airplanes. They abandoned the railroads. They abandoned the trains going in and out of Union Station. In Albany, a super-highway under construction for the state’s super-quarters known as the South Mall had to go over a portion of the railroad tracks. The state bought the area, including Union Station, for $5 million. The station would be of no use to the railroad with part of its tracks gone, and it was closed. The fate of the fine old building is yet to be decided. It is now in the process of being transferred from the Department of Transportation to the Office of General Services, custodian of surplus state property.”

This was at a time when there were state hearings at the Public Service Commission, which then regulated railroads, into the standards of service provided by Penn Central. The PSC had sued the railroad for failing to adequately maintain its passenger locomotives; union engineers brought charges of neglect and deterioration. Albany wasn’t the only place that was concerned, at a time when it had lost its train station, and the promised new one in Colonie hadn’t yet opened; New York City considered the Empire Service, with its connection to the seat of government and beyond, as critical.

Soon came the interesting revelation that of the two “modern” stations – assuming “modern” means nondescript huts with plastic seats in the waiting area – Penn Central had paid only for one, the one in Rensselaer. The Karner Road station, which ran to $150,000 in 1969 money, was paid for by the State Department of Transportation, apparently very quietly. A Penn Central attorney confirmed that the facility was built by the state (but owned and operated by the railroad), and said the railroad “was not about to design a ‘Taj Mahal’ when the state was footing the bill.” Nor when Penn was footing the bill, it’d be fair to say.

When a “temporary” station reopened in Schenectady, pretty much at the site of the old Union Station, the Colonie station was closed, Sept. 9, 1979. It appears to still survive as a construction storage shed.

Thanks to several folks who have made helpful suggestions on improvements to this article. The earlier version used Penn Central to refer to both the pre- and post-merger railroad, but in fact it was the Pennsylvania Railroad prior to the merger. There are other examples. Also noted: the New York Central wanted out of Albany nearly 10 years earlier. More on that here.

3 thoughts on “How Penn Central Ruined Everything, Railwise”