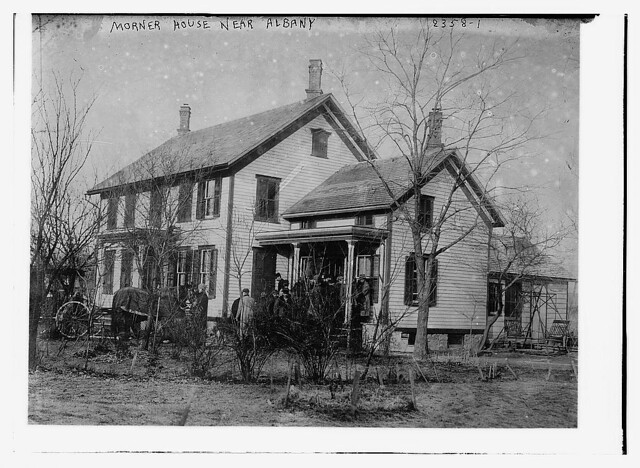 Checking through the Library of Congress collection on Flickr, we ran across this 1911 photo published by Bain News Service, marked “Morner House Near Albany.” If it looks like there was quite a hubbub going on at the Morner house, well, there was. For starters, “near Albany” is relative; Bain also described the house as in Defreestville. In fact, it was on Morner Road in East Greenbush. The reason it was in the news was the shocking murders of Mrs. Conrad Morner (a widow), son Arthur and daughters Edith and Blanche. They were generally believed to have been killed by an Italian farmhand named Edward Donato (or Di Donato) who had worked on the farm for a few months. The New York Times has as good a summary as anyone. No particular motive beyond a potential disagreement with Arthur Morner was discussed. Apparently quite a number of people thought to be Donato were arrested all over the area and beyond, but none of them could be positively identified, and he was never found. There was long speculation (including the possibility that Conrad Morner’s death a few years before was also suspicious) but no resolution. The house still stands.

2 thoughts on “The Morner House”