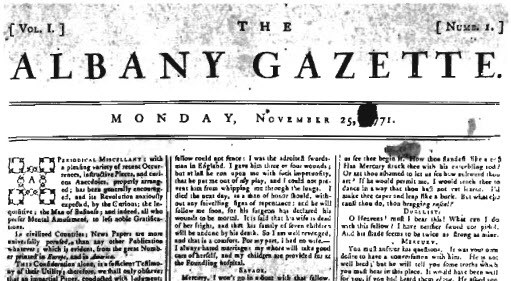 George Rogers Howell’s “Bi-Centennial History of the County of Albany,” which covered the city and county through that bi-centennial year (dating to the charter) of 1886, tried to “give a list of all periodical publications of any importance issuing from the press of the county since the very first newspaper printed in the city in 1771.” He noted that the sources were sometimes incomplete or contradictory with regard to dates, and I haven’t made an attempt (yet) to correlate these with a similar listing of publications at the Library of Congress. Someday that’ll happen.

It’s hard to remember how important Albany was in the early days of the republic. Right through the Civil War and almost into the 20th century, the Albany press mattered. Partly because of its position as the seat of state government, partly because of its proximity to New York City, partly because it was at the head of the Erie Canal, Albany was a cauldron of political thought and action, a place where a young congressman named Abraham Lincoln, on the stump for presidential candidate Zachary Taylor, would come to meet with publisher/kingmaker Thurlow Weed.

It was also a place where technology advanced, and for a while (a fairly long while) was one of the most important publishing centers in the country. It was in Albany that steam first drove a printing press, in Albany that massive publishers like J.B. Lyon grew.

As Howell notes, the very first newspaper printed in the city was in 1771, the Albany Gazette. It was far from the last. Here is Howell’s listing of just the more major papers that were published up through 1886. It’s arranged a little oddly, giving the year and the date, where known, that the newspapers began; in some years there were multiple publications commenced, in others none. There may be more up-to-date information somewhere, and we may follow up on a few of these, but here is Howell’s original list:

1771.–November. Albany Gazette, published by James & Alexander Robertson. Discontinued about 1776, the publisher having joined the British and gone to New York City.

1788.–January 26. The Albany Journal, or Montgomery, Washington and Columbia Intelligencer. Charles R. & George Webster, publishers. Semi-weekly, winter and summer. In connection with the Gazette. Discontinued May 25, 1789. February 11, The Federal Herald. Removed from Lansingburgh by Claxton & Babcock, and soon after returned. The Albany Register, weekly; John & Robert Barber until 1808; Solomon Southwick until 1817. Revived in 1818 by Israel W. Clark.

1813.– January 26. The Albany Argus, tri-weekly, semi-weekly and weekly. Founded by Jesse Buel. A daily in 1825. The Croswells, Comstock, Cassidy and Manning have been among its publishers and editors. Now the Argus Co. publish it.

1835.–May. The Silk Worm, monthly; two years; then changed to The Silk Worm and Sugar Manual; discontinued in 1858.

1845.–April 9. The Albany Freeholder, a weekly anti-rent paper, by Thomas A. Devyr. The Gavel, by Joel Munsell. The Scourge, by Woodward & Packard. Vesper Bell, by Abbott & Crosby.

1848.–Christian Palladium, by Jasper Hazen; removed to New Jersey in 1855; was called Christian Herald from 1849. The Busy Bee, by E. Andrews, two years. The Castigator, by Mortimer Smith, editor.