Remember how at the Delavan House “every possible care and attention have been paid to the means of escape in case of fire”? In the last days of 1894, that wasn’t enough.

Gendisasters.com has a summary that was printed in the Fort Wayne, Indiana News, dated Dec. 31, 1894:

FAMOUS HOTEL GONE
Delvan [sic] House Destroyed and Several Lives Lost in the Flames
PANIC AMONG THE GUESTS
Woman Leaps from Window and is Fearfully Mangled –
Falling Wall Buries a Fireman –
Many Are Badly Burned and Otherwise Injured –
Greater Part of the Guests Lose All their Clothing.

Albany, N. Y., Dec. 31. — The candidacy of the several men for speaker of the assembly received a startling baptism of fire here last night, for the Delvan [sic] House, that famous hostelry known from Maine to California, the center of all big state political events for 40 years, was completely destroyed. Fire is not an uncommon visitor, but fire such as this has seldom been seen. It was 8:30 and the political headquarters of both Mr. Fish and Mr. Maltby were filled with politicians and newspaper men. State Factory Inspector Connolly, who had been in the lobby with a number of people, started to go up the elevator. He remarked that he smelled smoke and suggested an investigation. Before it could be begun there were cries of fire from different parts of the house simultaneously. 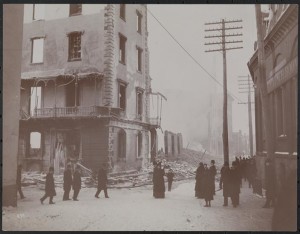 The outburst of flames before an alarm could be given to arouse the inmates of the rooms was something appalling. Up the elevator shaft there shot a solid column of flames, up the staircase near this perfect sheet, another column. Fortunately the guest list was not very large, and a majority of those registered were politicians and were down on the second floor. There was rush for the stair in the front and the servants’ stairs in the back, where the flames had not yet reached, and in a few minutes there was a tumbling mass of humanity coming down on these few means of egress. Those on the two upper floors could not avail themselves of the exits, for the flames were rushing along the corridors, and people on the street, who had not yet seen the flames, heard a crash of glass and saw figures come tumbling out the windows.

Within 10 minutes after the first note of an alarm, at least 12 persons were dangling on the insufficient rope fire escapes or hanging on to the window sills.

The department arrived quickly, but it took some time to get ladders up, and in the meantime some of the people had dropped to the street. On the right side of the building there appeared at the window, surrounded by smoke, a man and a woman. The man had hold of the woman trying to persuade here to wait for help, but she broke away and sprang out. She struck a balcony and rebounded to the street. The man waited for a ladder and was taken down in safety. The woman was his wife and she will probably die. In ex-Speaker Malby’s room, which was to the rear of the elevator shaft where the fire first appeared, there was the greatest excitement. About 20 politicians were there, including Congressmen Weaver and Curtis, Senator Kilburn and Mr. Maltby. In getting out Mr. Robbins had his face badly burned. 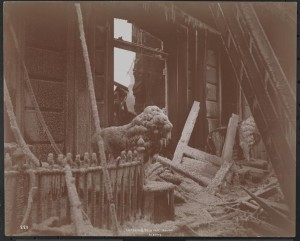 In Mr. Fish’s headquarters there was less hurry because they were near the stairs. All got down safely, but the majority left their baggage. E. A. Manchester of Auburn, postmaster of the assembly, ran toward the baggage-room for his grip, returning he found his way blocked with flames and smoke and rushed back to a window. He smashed it out and slid down the rope fire escape.

Although five stories high, there were no outside fire escapes and the only means left for people in the cut off rooms was to use the rope fire escapes. B. F. Heilman of Brooklyn, was in the third story. He opened his room door as soon as he heard the cry of fire. A burst of flame made him look to the window as the means of escape. In an instant he had but two alternatives – a fiery dearth or a jump. He chose the latter and plunged through the window. When he was picked up from the sidewalk he was found to be badly injured. He will die. His wife who was in the room with him tried the fire escape, but it either broke or else she failed to hold to it, for she too came to the pavement heavily. Her right leg was broken, her left ankle dislocated and she was badly burned about the face and head.

In less than 15 minutes after the fire started the entire structure was wrapped in flames. From the windows of the each of its five stories smoke poured in the volumes and a few minutes later the flames belched forth. In 20 minutes the building resembled a seething crater and it was plain to the thousands of spectators who had gathered that it would be entirely destroyed. Edward Walsh, a reporter, was caught in the hall. Before he could get out he was badly burned and had to be taken to the hospital. Of the 100 or more guests at the hotel not one is known to have saved more than the clothes on their person. The Delavan House was 50 years old and was one of the most famous hotels in the country. The total loss is estimated at $500,000, with an insurance of $300,000. A falling wall buried a fireman, but he was taken out and is not thought to be dangerously hurt. One of the incidents of the fire was the escape of Miss Martin of New York. She was in the fourth story window on the Steuben street side when a ladder was raised. A messenger boy rushed up and broke the window, thus freeing her.

The tragedy played out over a number of days, as at first it was not known how many were in the hotel, how many had escaped, and how many perished. In the first days, it apparently wasn’t even clear whose job it was to figure that out – a bit surprising, given that this was a long way from the first big fire in Albany’s history. Nevertheless, on Jan. 2, 1895, the New York Times reported that:

The search for the bodies of servants and perhaps guests – for now inquiries are being made by friends of persons who were supposed to be in Albany on Sunday – who perished in the fire which destroyed the Delavan House Sunday night will begin to-morrow morning by direction of Mayor Wilson.

Under the city charter it is neither the duty of the police nor the Fire Department to recover bodies in a fire. The duties of the police cease when they have called ambulances for the injured, and the Fire Department has no further office than to extinguish the fire. Yesterday only two streams of water were played on the ruins. To-day there were half a dozen. Fire Chief Higgins informed the Mayor that the department had ben too busy since Sunday to pay much attention to the Delavan House ruins. Mayor Wilson and other city authorities held a consultation to-day and decided to proceed with the search for bodies to-morrow, and to afterward determine the question from which fund to take the money . . .

All the injured in the City Hospital including Mr. Heilman [who had jumped from a fourth story window, along with his wife], are expected to recover. Edwin M. Moore, one of the proprietors of the Delavan, is critically ill with pneumonia as the result of exposure during the fire.

The confusion had gotten bad enough that a local contractor offered to excavate the ruins and search for bodies, saying on Jan. 3 that it was a disgrace the city had let such a long time pass without doing anything to recover the bodies. The property owners said they had hired their own contractor and that work to search for bodies would begin on Jan. 4, five days after the fire. It was noted that 400 tons of coal stored in the cellar were still burning.

On Jan. 8, the Times reported that additional bodies had been found, bringing the total to eight, including “Simon Meyer, a coffee man; another is identified by parts of the clothing as that of Agnes Wilson, a chambermaid.” The paper saw fit to report that “Myers” (as he was spelled in another article), the coffee man of the hotel, was a very sound sleeper. The Times report indicated some question of whether the proprietors had done anything to stop the spread of fire, and that a firehose at the site had suffered from very low pressure. Low water pressure was cited as a factor in other fires, including one at Helmes Manufacturing, that occurred around the same time.

On Jan. 19, the Times reported that Benjamin Heillman, of Brooklyn, succumbed to his injuries. “In jumping from the window, Mr. Heillman struck a balcony and received internal injuries. His wife was badly injured and is disfigured for life.” They were on their bridal tour and had only just arrived at the hotel the night of the fire.

The Delavan House fire provided some serious impetus for improvement in firefighting in Albany. In that same Jan. 19 report, the Times said that “the Fire Commissioners to-night voted to station fifty-four paid firemen in the fire engine houses at $60 a month, each to employ a permanent assistant engineer at $1,500 a year, and erect a new fire engine house for an additional steam fire engine in the vicinity of the big hotels. The present department is made up of “call men,” the alarm being given on church bells. The striking apparatus on these bells is often out of order, causing much confusion when an alarm is being rung.”

There were already paid engineers, drivers and so forth, as described back in 1884, but this appears to have been a big step forward in paying the firefighters themselves. The description of the alarm system doesn’t seem quite right, as we know that Albany put a fire alarm telegraph system in place in 1868 precisely to get away from the reliance on bells. It’s entirely possible that the fire alarm system was interrupted by an 1894 fire at the Central Fire Alarm Station in the City Building at South Pearl and Howard.

The Delavan House, founded 50 years earlier by temperance advocate Edward Delavan, was not rebuilt, but several years later the new Union Station began to rise in its place.