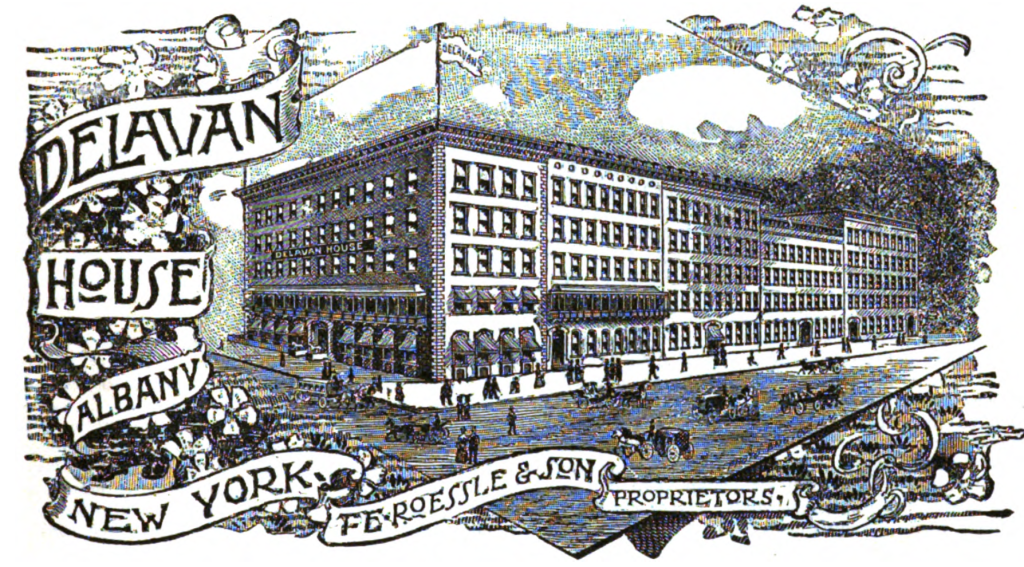 We haven’t talked enough about the Delavan House, which was one of Albany’s premiere hotels for nearly 50 years. It was founded by Edward Delavan, who was born in 1793 in Westchester County. After his father died, the family moved up to Albany and Delavan apprenticed to a printer, then clerked in his brother’s hardware store before becoming the store’s buyer abroad in Birmingham, England. He ventured into importing wine, speculated in real estate that happened to be along the path of the Erie Canal, and became fabulously wealthy. Back in Albany, he was converted to the temperance movement, renouncing the very thing that had made him rich, helping to found the New York State Temperance Society and even fighting against sacramental wine. His zeal for reform never waned throughout his life, and he employed the latest technology of steam printing to create and direct mail anti-alcohol pamphlets, including sending them directly to troops in the Civil War. It was written that he printed “upward of one thousand millions of pages of temperance literature.” 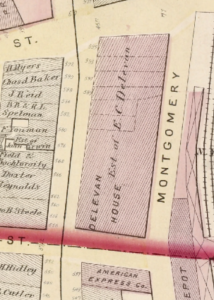 In 1845, he established the Delavan House on Broadway, noted as a temperance hotel (although a number of accounts call into question how strictly temperance was observed in what became one of Albany’s most important gathering places). It took up a good portion of the east side of Broadway between Steuben and Columbia, backing up against Montgomery and very well situated for the railroad trade.

1888’s The Empire State: Its Industries and Trade provided a nice description of the history of the establishment:

Delavan House, T.E. Roessle & Son, Proprietors. – A perfect exponent of the truly American science of hotel keeping is the widely known Delevan [sic] House, Albany, N.Y. In every way the Delavan is a representative hotel, sharing equally with two or three others the reputation of standing at the head of the hotel business in the capital city. In truth it has never been called to compete with other hotels, for since it was opened, it has always had a select, influential and extensive patronage from the best classes of the community. The guests of the Delavan House have the best of accommodations, fare and service; this ably managed and superior hotel renews on its registers year after year the names of numbers of our prominent citizens, senators, assemblymen, tourists, etc., who make it their permanent home when in the city of Albany. The hotel was built by the Delavan estate in 1845, and was opened in 1849 by T. Roessle, who conducted it till 1867, when the Lelands succeeded to the management. In 1882, Messrs. T. Roessle, Son & Co. (grandfather, father and son), became proprietors and continued the business till 1885, when the present firm of T.E. Roessle & Son assumed control. The partners, Messrs. T.E. Roessle and E.O. Roessle, have had great experience, who have made a name and reputation for the Delavan House not only in Albany but throughout the entire country. Mr. T.E. Roessle is also proprietor of the Fort William Henry Hotel, Lake George, N.Y., and likewise of the famous Arlington, Washington, D.C. The Delavan is a spacious and substantial five story building, covering the entire block, and contains 400 rooms available for guests. It has latterly been thoroughly renovated. All modern improvements are here, including safety passenger elevator, steam heat, electric lights, annunciators, telegraph office, barber’s shop, billiard rooms, etc. The Delavan is handsomely furnished throughout, while its rooms are the largest and best ventilated in the city. The sanitary arrangements are complete, while every possible care and attention have been paid to the means of escape in case of fire. The culinary department is under the supervision of a distinguished French chef, while everything of the finest quality is to be found in the menu. In fact so complete is everything in the Delavan, that visitors having once stopped here are certain to return when again visiting the city. Mr. E.O. Roessle is one of Albany’s public spirited citizens. He is secretary of the N.Y. Hotel Men’s Association, and is a major on General Parker’s staff, Third Brigade. Guests ever remember with pleasure their delightful stay at the Delavan House, which challenges comparison and criticism with any similar establishment in the United States.

Delavan himself seems not to have been much or long involved in the hotel business, and no wonder, as he was still heavily involved in the temperance movement that brought prohibition to New York for a brief few months starting in 1855. He retired to Schenectady and died there in 1871.

3 thoughts on “The Delavan House”