The 1843 map of the confluence of the Mohawk and Hudson Rivers contained some great detail about Cohoes, the city that grew up on the legendary falls and came to be known as the Spindle City for its role in the textile industry, much of which enjoyed hydropower well before steam engines were available. 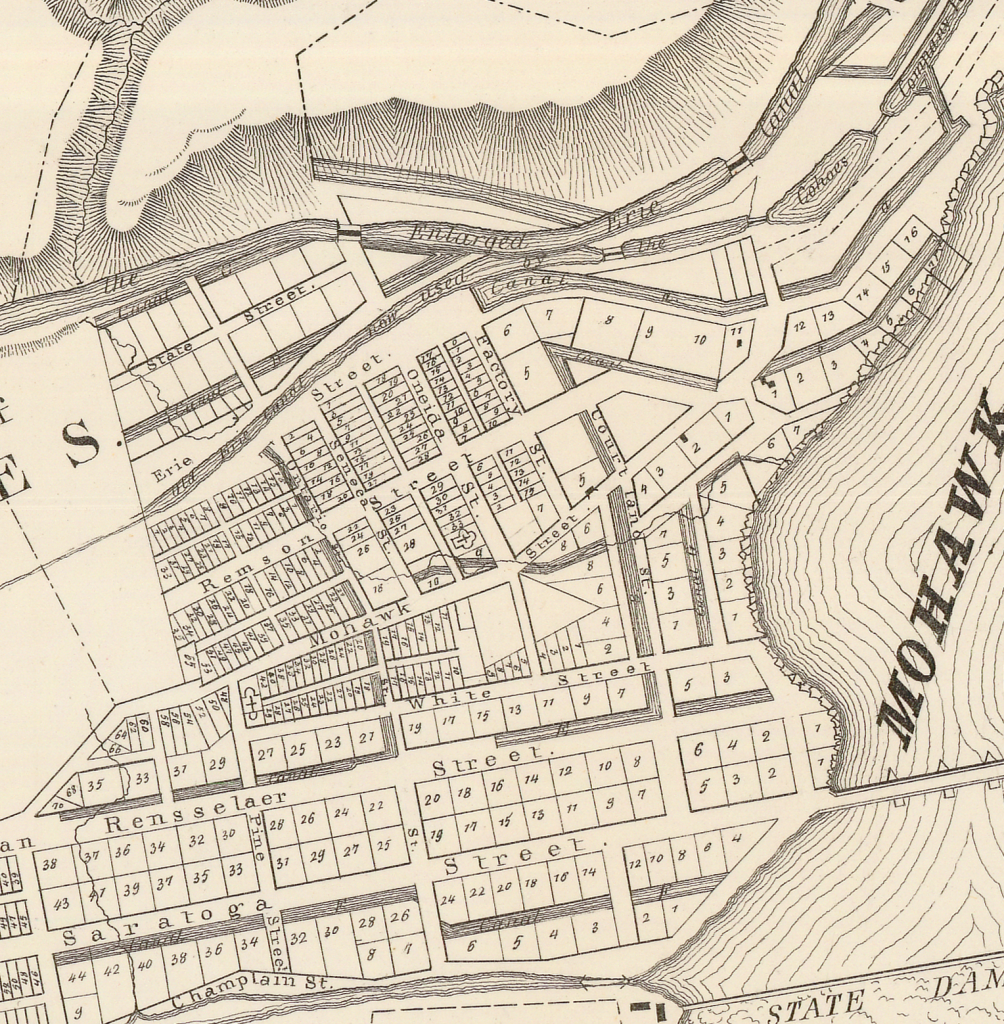 At the top of this map from 1843, we can see the Enlarged Erie Canal. Enlargement was made necessary within a dozen years of the canal’s opening in order to accommodate the high levels of traffic. Below it, you can see the “Old Erie Canal Now Used By The Cohoes Company.” Throughout the streets, we can see a series of other canals, each labelled with a letter. While the path of the Erie is still pretty easy to see in Cohoes, there doesn’t appear to be much sign left of the rest of these canals.

So, who dug all this?

In his history of Cohoes from 1877, Arthur H. Masten noted that up until 1811, “there had been no indications of the importance it was destined to assume as a manufacturing town . . . there was little to distinguish the place from other farming settlements in the neighborhood.” But along came the Cohoes Manufacturing Company, formed by a group of gentlemen from nearby Lansingburgh in 1811. They bought sixty acres on the river bank, part of the Heamstreet farm, along with water rights, and bought further land on the other side of the river from Jacobus Van Schoonhoven, and Simmons Island, situated between Cohoes and Van Schaick. Property belonging to the patron was transferred to Gerret Peebles, one of the trustees of the company.

The Cohoes Manufacturing Company was formed for the purposes of manufacturing “Cotton, Woolen and Linen good, making bar-iron, Anchors, Mill Irons, nail rods, Hoop-iron and Iron Mongery.” The company’s first enterprise was the manufacture of screws and the construction of a wing dam to provide power. It appears the company’s plan was always to encourage other manufacture on their lands, using their water, but for this particular company that never really came together. Then came the Champlain and Erie Canals, completed in this area in 1823, which provided new opportunities. Cohoes Manufacturing’s screw factory burned down and the replaced it with a cotton factory; that also burned down, in 1829, and the company seems to have stopped doing much of anything.

A similar enterprise called the Cohoes Company had popped up in 1826, with directors including Peter Remsen, Charles E. Dudley (of observatory fame), Stephen Van Rensselaer Jr. and others; this company received the rights to erect a dam across the Mohawk River above the Cohoes Falls, and had authority to

The Cohoes Company seems to have acquired the holdings of the Cohoes Manufacturing Company, and in 1831, things started to happen.

A Mr. Wilkinson opened a machine shop on Mohawk street powered by water from a waste gate on the Erie Canal near the north end of what would be the Harmony Mills site. A saw mill soon followed. Canals of the Cohoes Company were under construction, completed in 1832.

“The principle one, Basin A, extended from a point in the rear of the present Harmony Mills carpenter shop, on Mohawk street, to a short distance north of Factory street. The other, Basin B, was of less importance, serving principally to receive the water from Basin A and convey it to the river. It is on Remsen street and forms the fourth level of the Cohoes Company’s present system. The first factory to obtain its power from Basin A was one (now occupied by Holsapple’s bedstead factory) which was erected in the early part of the year by E.L. Miller, a wealthy gentleman of Charleston, S.C., who intended to engage in cotton manufacture.”

In 1833 another canal was built, running on the east side of the Erie and parallel with it, to a point a few hundred feet above “the Two Locks,” near School street, where it was taken under the canal then continued in its present course, terminating near the middle lock of the Three Locks, in the rear of Harmony Mill No. 2. The Cohoes Iron Foundry, run by John L. Wilkinson and Nathaniel Wheeler, was located where the Harmony Mills were constructed. Blacksmith Daniel Simmons built an axe and edge tool factory from which the Simmons Axe became famous. His partner was Levi Silliman. A veneering and sawing mill was built near Remsen and Mohawk streets.

By 1840,  the enlargement of the Erie Canal was underway, and the State swapped its old canal for Cohoes Company land, as can be seen in the map above. The “Old Erie Canal Now Used by the Cohoes Company” and its connected waterways weren’t designed for transportation, but for the transmission of hydropower to all the mills that could be attracted to Cohoes. In these days before steam engines were common, water power was a huge attraction.

We’d love to know if there is any evidence of these old canal structures (beyond the well-known Erie Canal locks) in Cohoes today, other than what is immediately around Harmony Mills. Up in that area, the canals lasted a very long time, as we’ll see tomorrow.

One thought on “Cohoes: The City of Canals”