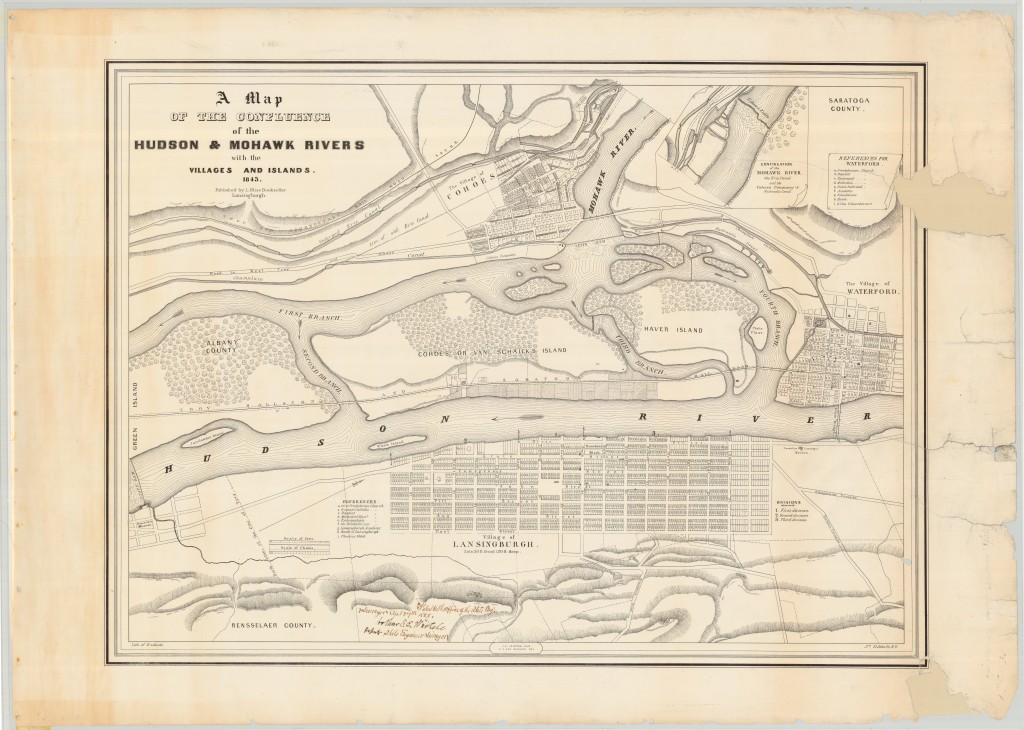 Hoxsie is on a bit of a map jag. Again thanks to the resources of the NYS Archives, we have a very detailed representation of the confluence of the Hudson and Mohawk Rivers with the villages and islands, published by Luther Bliss, bookseller of Lansingburgh in 1843. Once again, click on it to zoom in. Another day soon, we’ll focus on the tremendous details of the canals of Cohoes but for now we’ll hit just a few highlights.

This overview shows “Cohoes or Van Schaicks Island,” now known as Van Schaick Island, positioned between the branches of the Mohawk the flow below Cohoes Falls and the Hudson. It’s a little surprising that all these dams were already in place in 1843 and are still here today. Some of the smaller islands are different but the major waterways are the same. Across the bottom of the island is the line of the Troy, Ballston and Saratoga Railroad; the line persists today as a bike path with the Black Bridge crossing the second branch and roadway continuing north. 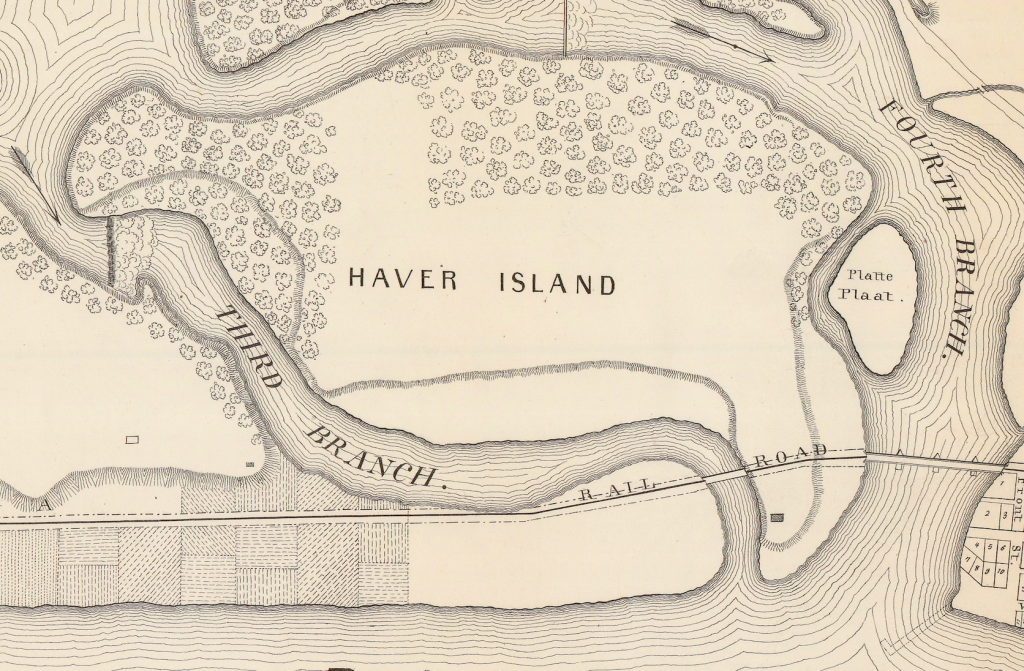 To the north, Haver Island. You know it as Peebles Island, now a state park that was once the site of a Cluett and Peabody shirt bleaching operation, some buildings of which still stand. The City of Cohoes website says that “haver” was Dutch for “oats.” The railroad line still exists as a road and bridge over to Waterford. 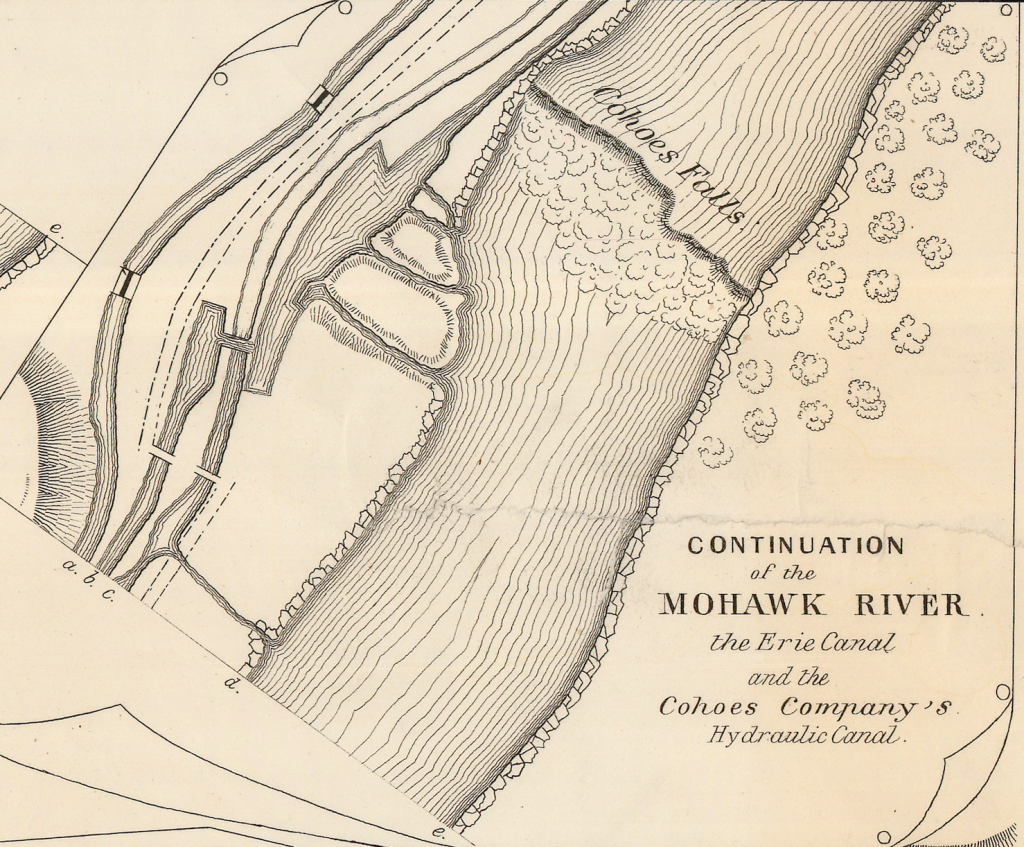 This inset to the map shows the Cohoes Falls, the enlarged Erie Canal, and the hydraulic canal of the Cohoes Company, which developed extensive hydropower to attract industry to what became the Spindle City. More on that to come. 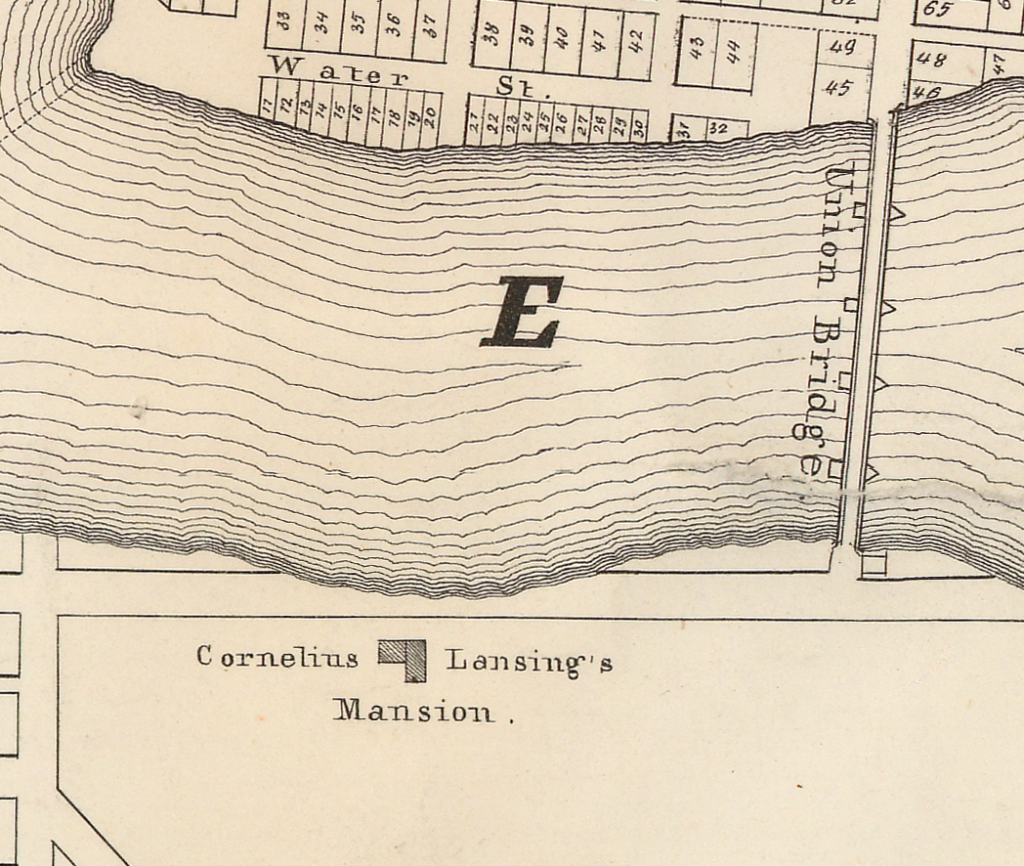 Meanwhile, over at the north end of Lansingburgh, the Union Bridge connected it to Waterford (in the same place the bridge stands today). This was the first bridge across the Hudson River at any point, built on a design by Theodore Burr in 1804. Burr was cousin of the more famous Aaron Burr, but if you’re a bridge fan, he also built the long-standing wooden bridge between Schenectady and Scotia in 1808. Near the bridge was what is shown here as Cornelius Lansing’s mansion; he was a farmer (presumably a prosperous one) and descendant of Abraham Jacob Lansingh, who received the original patent from the patroon, Stephen Van Rensselaer. 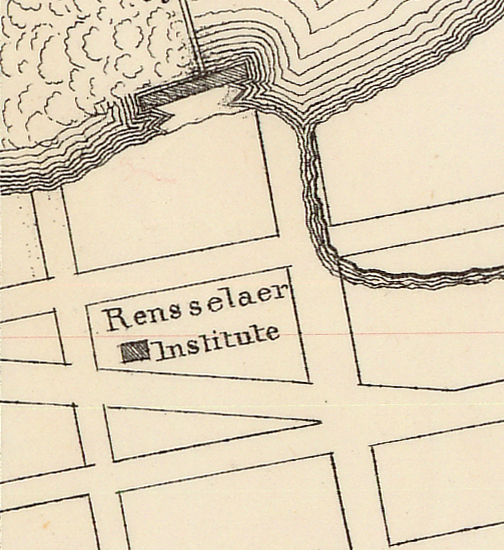 Also on the map, very close to what was then the State dam (later replaced by the Federal lock and dam further up the river), the original location of the Rensselaer Institute, now RPI. It was then in the former Farmer’s Bank building, way up on the north end of Troy, which Arthur James Weise (in “History of the City of Troy…”) placed on the northwest corner of Middleburgh and River Streets, now the site of the nondescript building housing Snyder Printers.

A little up the river from the dam, Jan Gowsen Island, which was apparently barely an island, often underwater. It was eliminated when the new dam was built. 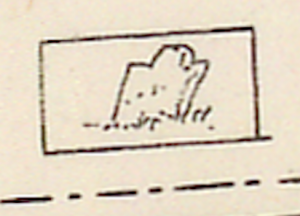 Most charming thing on the map: this little sketch of a tombstone representing the Van Schaick cemetery. It looks like George Harriman drew it.