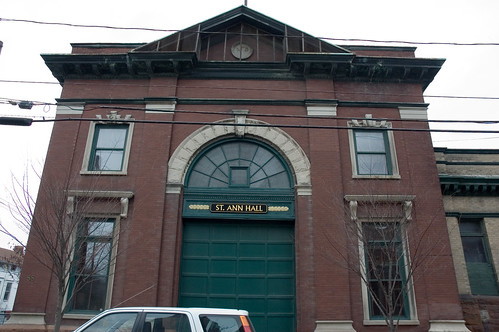 From 1884, the “Albany Hand-book” described the current state of the Fire Department, which was established in its then-current form in 1867, overseen by the Mayor and five commissioners appointed by the Common Council. The head was called the Chief Engineer, who “has sole command at fires, makes daily examination of the affairs and property of the departments, and makes full reports of the fires to the board. Salary, $3,000 per annum.”

Steamer trucks were located at:

“Hose Depot.–One of the most admirable features of the department is its hose and supply depot, running from Plain street to Hamilton street. Here the hose is kept, together with extra wheels, tenders, etc., fuel and other supplies. After a fire, the hose is taken to the depot, and after being thoroughly washed is hung up and dried, a sufficient quantity, that is clean and dry, being kept on hand to replace all that is wet.”

“The steamers, with the exception of the reserves, are all of the Amoskeag pattern, and with their tenders, or hose-carts, are valued at $5,150 each; the trucks, $2,250 each. They are drawn by about thirty horses, worth $300 each. The department property is valued at $301,780.

Pictured: St. Ann Hall, once home to Steamer No. 5, at Franklin and Fourth; you can just make out “AFD” in the medallion up high.

One thought on “Albany Fire Department, 1884”