In 1868, Albany put in place a system of fire alarm telegraphs, by which a signal could be sent to a central location to alert the fire department. Prior to that, church and school bells were used to raise the alarm. The Central Fire Alarm Station was at the City Building at the corner of South Pearl and Howard. It’s possibly ironic that it was damaged by fire in 1894, but most buildings were damaged by fire back then, it seems. From that time the Fire Department sought to move it out of downtown for safety from fire, but it wasn’t until 1917 that a new location was finally constructed: a beautiful Dutch Revival building by Morris Ryder at 25 Delaware Avenue. The building was converted to the Louise Corning Senior Citizens Center in 1976, and is still in use today.

If you wanted to turn in an alarm at Lumber Street, you’d best head over to Livingston Avenue; Snipe Street is now Lexington Avenue. Paigeville was around Western and Ontario in Pine Hills. 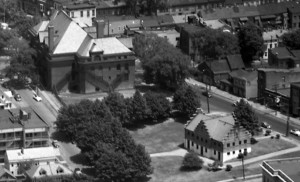 By the way, above’s what the Fire Alarm Telegraph building looked like in 1951. Today, it’s a tad more crowded in: 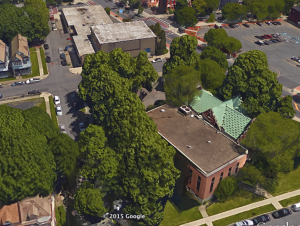