(This article originally appeared at Alloveralbany.com)

From petty thief to Lincoln assassination conspirator, if you were a criminal in Washington D.C. in the 1860’s — you were going to be sent up the river.

Way up the river. To Albany.

The Albany Penitentiary served for decades as the prison for the District of Columbia.

A new kind of prison

With the old downtown jail becoming inadequate to house what were characterized as “the vilest dregs of society, the rakings of the gutter and the brothel, the profligate, and even the diseased,” Albany County resolved in 1843 to create a new style of penitentiary aimed at “moral reformation of the convict,” but one where “labor performed in the prison shall produce a sufficient income for its maintenance.”

For some it truly became a prison of their own making, as county prisoners from the old jail were put to work building the new one. They moved themselves in by 1846, and continued to build, including a women’s wing, through 1848. In all, the institution covered three acres, enclosed by a 14-foot high brick wall complete with guard-houses. The entire goal of the institution was to show not only that prisoners could earn their own keep, but that by making them busy they would not return to their criminal ways. Most of the inmates were petty criminals serving six months or less, guilty of such offenses as assault, horse theft, indecent exposure, and passing counterfeit tobacco stamps. Petit larceny was by far the most common offense, which administrators took care to separate from the less common offenses of “stealing key of mail bag,” “stealing money from mail,” and “stealing at West Point.”

The Albany Penitentiary’s success as a model reformatory (whipping and the crucifix: no; cold shower punishment: yes) was quickly rewarded. The State Legislature passed act after act permitting other counties to use the facility. The growing roster of inmates was put to work caning chairs and making inexpensive shoes. Female inmates worked doing laundry.

The Civil War threatened this model of penal self-sufficiency. Petty criminals were forgiven their sentences if they enlisted in the Union Army. The number of inmates fell and the southern market that supported the penitentiary’s shoemaking factory disappeared. 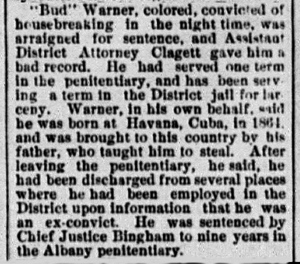 But penitentiary officials were alert to opportunities. When they learned that the District of Columbia’s penitentiary was being taken over by the United States Arsenal, they arranged for Albany to be the penitentiary for the District of Columbia. It began in September 1862 with the transfer of 131 convicts, and continued for decades after the war ended. Confederate prisoners of war, D.C. swindlers, and Albany pickpockets all ended up in the same institution, and the institution profited nicely. 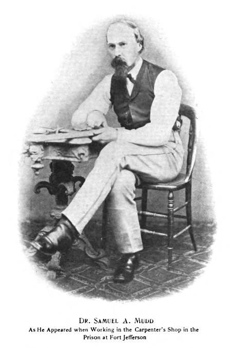 The most famous convicts ever sentenced to time in Albany never arrived here. Four of the convicted conspirators in the Lincoln assassination — Dr. Samuel Mudd, Edman Spangler, Samuel Arnold, and Michael O’Laughlen — were sentenced to serve in Albany. They boarded a ship in the Potomac expecting a long trip north but were surprised to find themselves sailing decidedly south, to a military prison in the Dry Tortugas, islands at the end of the Florida Keys. Despite his cries of injustice at the sentencing, Dr. Mudd, convicted of conspiracy for setting John Wilkes Booth’s broken leg after the Lincoln assassination, apparently found the extremely southern prison more to his liking. A friend wrote to Mudd’s daughter that “He is doing a great deal better than he would have done at Albany.”

The old Albany Penitentiary was finally closed when a new one opened well out of the city, on Albany Shaker Road, in 1931. It would be twenty years before the site was was put to use again, with the opening of the Veterans Administration Hospital in 1951.

One thought on “The Albany Penitentiary”